This Day in History: November 4th 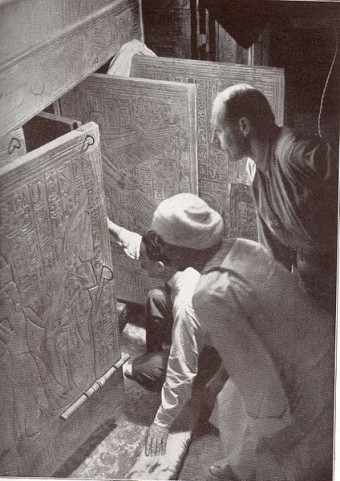 British archaeologist Howard Carter, running out of both time and money for his excavation project, finally unearthed a step leading to King Tutankhamen’s tomb in the Valley of the Kings on November 4, 1922. He quickly ordered the stairs to be cleared of any sand and debris, and by noon the next day a door stamped with the seal of the Egyptian royal necropolis was revealed.

He contacted his long-time friend and financial backer Lord Carnarvon to tell him the good news, and he and his daughter left for Egypt right away to be present for the long-awaited discovery. Soon after, Carnarvon, his daughter and Carter’s assistant stood breathlessly by as Carter started to carefully drill a hole in the plaster door to the tomb. When he had finally made an opening large enough to see through, he lifted a candle to the opening and waited for his eyes to adjust to the light.

As objects in the room slowly came into focus, Carter stood frozen and silent. Lord Carnarvon, peering impatiently over his shoulder demanded, “Can you see anything?”

The tomb was carefully excavated by Carter and his team over the next several years, and even though to our eyes the treasures it held seem incredibly lavish, by ancient pharaoh standards Tut’s tomb was pretty modest. The jackpot was a stone sarcophagus holding three nested coffins, the innermost made of solid gold and holding the mummy of Tutankhamen, the Boy King, magnificent by anyone’s standards. Most of these priceless artifacts today reside in the Cairo Museum.

One of the more bizarre tales surrounding King Tut and his tomb, and mummies in general, is the matter of a “curse.”

The discovery of King Tut’s tomb was big news at the time. And the papers played up, or even made up, any angle of the story they could find. A novelist by the name of Mari Corelli issued a warning in March of 1923 that anyone who had entered King Tut’s tomb could expect dire consequences for having done so.

When Lord Carnarvon, who had been in poor health for the past two decades, died of pneumonia on April 5, 1923, the media went ballistic. Conan Doyle, author of Sherlock Holmes and an avid occultist, stated his belief that Carnarvon’s death could have been caused by a “Pharoah’s curse.” Or pneumonia. Always a possibility.

This went on for a ridiculously long time, with the press finding ways to blame a long-dead Egyptian king for the deaths of numerous people involved in any way with the tomb’s discovery. According to one compilation, 26 people associated with the find were bumped off by a vengeful King Tut within ten years. The real story is that six people involved with the discovery died during the decade that followed, and most of those associated with the project lived to ripe old ages. Howard Carter himself lived to age 65, 17 years after the discovery of King Tut’s tomb.

So are all claims of a mummy’s curse completely groundless? In the strictest sense, maybe not. Dead bodies can contain bacteria and mold that are very dangerous to the living. Perhaps ancient grave robbers sneaking into tombs very soon after a pharaoh’s death contracted lethal infections, leading to stories about mummy’s “curses.”

Indeed, a study done on 40 different mummies showed that when mummies are unwrapped, they generally release dangerous mold spores into the air. It’s possible that when the doors to the tombs were opened, air currents may have disturbed these spores, causing health problems for the people present breathing them in.

And as far as vengeful curses go, there’s also a chance the ancient pharaohs don’t mind modern man respectfully visiting their burial places. The ancient Egyptians believed that one way to keep a person’s soul alive was by remembering their name, and King Tutankhamen and many of his fellow pharaohs can rest assured of that.