This Day in History: November 18th 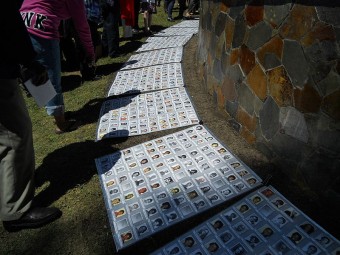 On this day history, 1978, over 900 Americans died in a South American cult commune on the order of Reverend Jim Jones. Many of his followers willingly drank a poisoned concoction that led to their deaths, others were forced to do so at gunpoint. The children of the cult were the first to die; their parents or nurses used syringes to administer a mixture of fruit juice and cyanide down their throats before taking their own lives. Only 33 members of the cult, or the People’s Temple as it was also called, managed to escape with their lives.

The history of what led up to that horrible day began in the 1950s, when James Warren Jones started a ministry based heavily on socialist principles. After a move to California in 1965, the church expanded and began more actively supporting left-wing political ideology. With the IRS breathing down his neck and mounting negative attention from the press, Jones convinced his followers that escaping the evils of the American way of life in the jungle of Guyana and creating their own Utopian society was their best bet. In 1977, they made the move to their South American paradise, a small tract of land that became known as Jonestown.

The paradise that Rev. Jones had promised never materialized, however. Instead, church members were obliged to work grueling hours in the communal fields, and were severely punished if they dared question any of Rev. Jones’ actions or edicts. Letters were censored, passports confiscated and loyalty to the church constantly questioned and tested. By this time, Jones’ mental health was deteriorating and he was suffering from extreme paranoia. He was heavily addicted to drugs, and firmly believed the U.S. government was plotting against him.

Here is an instance where that old adage “just because you’re paranoid doesn’t mean they’re not out to get you” certainly applies, because by 1978 enough concerned relatives of current church members and past members of the People’s Temple convinced Congressman Leo Ryan from California to fly down to Guyana to check out what was going on.

On November 17th, Congressman Ryan arrived at the compound accompanied by a T.V. crew and several journalists. Things went smoothly at first, but when a few residents of Jonestown asked if they could return to America with Ryan as he and his party were preparing to leave for the airport the next day, Jones got pretty heated and one of his toadies attacked Ryan with a knife. Ryan wasn’t hurt, but they skedaddled to the airport with the defecting church members ahead of schedule.

Jones wasn’t having it though, and ordered that Ryan and the rest of the group be ambushed and killed at the airstrip. The Congressman and four others were murdered as they were boarding their chartered airplane.

Jones knew this was the end of the People’s Temple. He told his followers that it would be impossible for their commune to continue functioning after the murder of Congressman Ryan, so to preserve the memory of their church, the ultimate sacrifice must be made. They would all take their own lives. 909 people perished at Jonestown, a third of those were children.

The buildings that made up Jonestown have been dismantled for use by the indigenous people, and the jungle has overtaken the rest. Today, there is almost no sign of the horror that took place there in 1978.