The Thibodaux Massacre of 1887 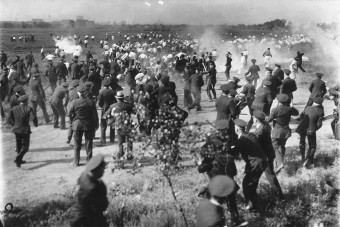 Thibodaux, Louisiana had a history of growing sugar cane. Settled sometime in the 18th century, it was incorporated into a town in 1830. Named after a popular plantation owner, it might not come as a surprise that—in addition to sugar cane—the town also raised quite a bit of racial tension back in the day.

The town was occupied by Union soldiers during the Civil War from 1862 on, resulting in tension between plantation owners and the black workers for whom they now had to draw up contracts and pay wages. Alexander Pugh was one such planter who complained that too much time was taken up negotiating labor contracts with the African Americans. He was also loathe to pay them, as an entry in his diary states:

I have agreed with the Negroes today to pay them monthly wages. It was very distasteful to me, but I could do no better. Everybody else in the neighborhood has agreed to pay the same, and mine would listen to nothing else.

That wasn’t the end of the disagreements between sugar planters and workers, however. Working on a sugar cane plantation was hard work rewarded by small wages. Black workers would often be paid in script rather than real money. Script could only be spent in the white plantation owner’s store, where the prices were usually marked up. Workers would end up becoming indebted to the plantation owner, and Louisiana law stated that a worker couldn’t move off the plantation until his debts were paid to the owner. Basically, the set-up nearly reduced black workers to the status of “slave” once more. Needless to say, the workers weren’t happy about the situation.

Starting in 1880, there were strikes every year against the Louisiana Sugar Planters Association. In 1886, the Knights of Labor established a chapter in Schriever, Louisiana. The Knights of Labor were a union that advocated for, among other things, the abolition of child labor, eight-hour work days, and equal pay for equal work. The Knights were unusual in that they accepted members from all walks of life. Workers of all skill levels, men or women, and even blacks (as of 1883) were allowed to join them.

In 1887, the Knights of Labor presented a list of demands to the Louisiana Sugar Planters Association on behalf of the sugar cane workers. They asked for an increase in wages to $1.25 each day (about $31 today), the elimination of script, and payment every two weeks rather than monthly. Not so much to ask, right? The Association thought it was. They rejected the demands, likely driven by their desire to continue denying blacks their basic rights.

The union decided to schedule a strike in retaliation. On November 1, ten thousand sugar cane workers across three parishes, including 1000 white workers, refused to do their jobs until their demands were met. The strike was well-timed, as that was a critical period for sugar plantations—if work wasn’t done, the entire sugar crop for that year was under threat.

As such, the plantation owners looked to the governor of Louisiana, Samuel Douglas McEnery. A more compassionate man might have seen the sense in meeting the strikers’ demands, but McEnery was also a planter and therefore unwilling to negotiate. He famously said, “God Almighty himself has drawn the color line,” before calling up the state militia and setting them on the strikers.

The militia came armed with guns, and the strikers put up little to no resistance. Without guns themselves, they had no chance of staring down the militia. They were evicted from the plantations while the militiamen protected the men called scabs who had gone to work in the strikers’ place. With the strike officially broken, the strikers sought refuge, many of them ending up in the black sections of Thibodaux.

Unfortunately for them, a man named Taylor Beattie put himself in charge of the Peace and Order Committee in Thibodaux. The whites in the area were growing nervous after hearing about white scabs being fired upon after the strike, and in another instance, shots being fired into the sugar mill in a neighboring county. Beattie was a judge, an ex-slave holder, and a planter himself. He declared martial law and set up a vigilante group. Any black man who wanted into or out of Thibodaux needed to provide a special pass to move around.

Obviously the black population didn’t enjoy being caged in like that. On November 22, two white patrollers were shot, though not fatally. Who exactly shot them is up for debate. A black newspaper claimed that Beattie and his gang were looking for any reason to kill a large number of blacks, but

Finding that the Negroes could not be provoked from their usual quiet, it was resolved that some pretext or other should be given so that a massacre might ensue…Tuesday night the patrol shot two of their number, Gorman and Molaison, and the cry went forth ‘to arms, to arms! the Negroes are killing the whites!’

Days of violence ensued, during which many black people were executed. The exact number is unknown. Local papers reported “six killed and five wounded,” though the black newspaper claimed that an eyewitness believed there had been more like 35 fatalities. No official count was ever made, with the deceased simply placed in shallow graves outside the town. No white people were among the dead.

The newspaper continues to paint a horrific picture: “Lame men and blind women shot; children and hoary-headed grandsires ruthlessly swept down! The Negroes offered no resistance; they could not, as the killing was unexpected. Those of them not killed took to the woods…”

And yet the killers were never brought to justice. Since the town’s own judge led the assault, it’s unlikely they would have been incarcerated even if they had been brought to trial for their misdeeds. It was the way of life in portions of the south after the war. As the black newspaper said,

To even think that such disregard of human life is permitted in this portion of the United States makes one question whether or not the war was a failure?

Today, the Thibodaux Massacre is remembered as one of the worst labor-related massacres in the history of the United States.