The United States Doesn’t Have an Official Language 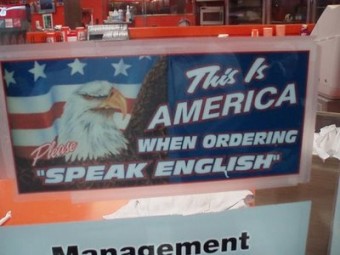 Today I found out the United States doesn’t have an official language.

President Theodore Roosevelt stated in 1907, “We have room for but one language in this country, and that is the English language, for we intend to see that the crucible turns our people out as Americans, of American nationality, and not as dwellers in a polyglot boarding house.”

He wasn’t the first to express this sentiment. All the way back in 1780 it was proposed to the Continental Congress by future President John Adams that English should be made the official language of the budding nation.  This was not a popular notion largely because Americans at the time spoke a variety of languages.  So the idea of picking one of the more popular ones and making it the official language was seen as “undemocratic and a threat to individual liberty”.

Despite this, efforts to get a national language declared at the federal level seem to pop up every few decades and has particularly been recently spurred by the rise in native Spanish speakers in the United States (up from about 10% to 13% in the last decade). As yet no bill with this tacked on has made it into law with this rider still attached. The primary argument for declaring a national language is outlined above by President Theodore Roosevelt and below by Congressman Steve King, who recently tried to introduce the “English Language Unity Act”: 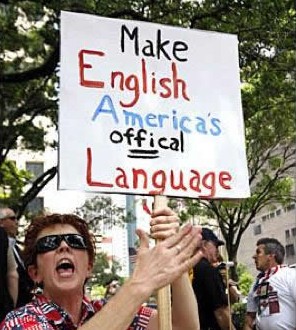 Typos happen to the best of us, but serously? 😉

We’ll set aside the fact that declaring an official language would likely have no effect whatsoever on what people spoke in their daily lives (only directly affecting official documents written by the U.S. government’s various offices and branches, which already always include an English edition) and we’ll set aside that second bit of the above statement, which I highly doubt he actually believes (or anyone who’s ever actually even glanced at a history book… or, you know, even just the world news today would be sufficient to refute it).  He was more probably just trying to be ultra-dramatic in such a way as to help polarize people, in fine political form practiced by politicians of every creed the world over. Although, King did once say in reference to putting up a fence between the U.S. and Mexico, “use a livestock fence to keep out human livestock…”  so… hmmmm…

Regardless, the base “unifying force” line of reasoning is generally shot down by linguists and historians such as relatively recently by the Linguistic Society of America which passed a resolution in the late 1980s against “English Only” measures due to being “based on misconceptions about the role of a common language in establishing political unity…”  And, indeed, if language was so unifying, the many prominent native English speakers who helped spur the American Revolution and the many linguistically diverse colonists who banded together in that revolution despite the differences in their native tongues would seemingly have not done so if that were the case.  Here, it was the common base ideology that was important, which is really what unifies a nation or causes strife when these core principles don’t line up within a populace. Of course, people back then tended to commonly speak multiple languages, a practice which is unfortunately no longer common in the United States. So it’s not completely surprising that they didn’t view native language as all that important and that today the “threat” of another language becoming common other than English has been a slightly more prominent issue.

Despite there being no official language at the federal level, to date 28 states have declared English the official language of their local governments, most of which have done so within the last few decades as the “English Only” movement has gained steam.  However, due to Title VI of the Civil Rights Act of 1964, if those states want to receive federal funds or support, any public entity in the state that receives federal funds must provide all vital documents in every single language that any client of that agency speaks.  President Kennedy had this to say as justification of the above:

Simple justice requires that public funds, to which all taxpayers of all races [colors, and national origins] contribute, not be spent in any fashion which encourages, entrenches, subsidizes or results in racial [color or national origin] discrimination.

In the end, the fact that English isn’t the official language of the United States hasn’t stopped it from becoming the dominant language of the country, with native English speakers comprising about 82% of the population, native Spanish speakers ringing in at number two at about 13%, and various other European and Asian languages comprising the bulk of the balance.  However, despite about 18% of the U.S. population natively speaking a different tongue than English, a full 96% of United States citizens speak English fluently. So barring something catastrophic happening, it seems unlikely in the foreseeable future that English is going anywhere as the de facto language of the United States.