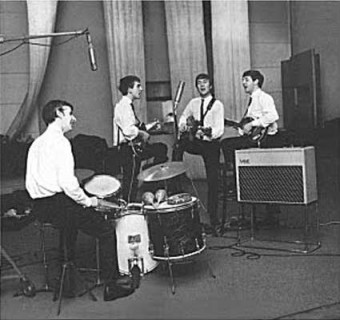 On an early September day a band from Liverpool, England called the Beatles, provincial and a bit rough around the edges, entered EMI studios at Abbey Road in London for what some consider to be their first official recording session, as it was the first time Ringo Starr was included as a member. (They had previously played together on occasion, and even recorded some songs, but never with Ringo as an official member of the group.  More here: The First Time John Lennon, Paul McCartney, George Harrison, and Ringo Starr Played Together)

The Beatles’ purpose that day at Abbey Road was to work with veteran producer George Martin and record two songs to release as their debut single. During a rehearsal prior to the recording session, the band ran through several songs, including a tune called “How Do You Do It?”, a song that George Martin envisioned as the A-side of their first single, and “Love Me Do,” a Lennon and McCartney original tentatively slated as the B-side.

When the recording session commenced that evening, the Fab Four made it crystal clear that even though they had come up with a great arrangement for “How Do You Do It?” they thought the song was way too poppy and lame for their tastes. They told George Martin if they ever played that song back home in Liverpool, they’d be laughed out of town.

The upstart band incessantly “reminded” their producer that they wanted to record only original material. George Martin, the man ultimately in charge, listened patiently and told them when they could come up with a tune better than what had been chosen for them, he’d be happy to release it as the A-side. In George’s opinion, the songs the boys had presented to him so far were only suitable for B-sides.

It only took two takes to get a track of “How Do You Do It?” that was ready for mixing, but the recording of “Love Me Do” was much more laborious and tedious. The rhythm track alone took 15 takes to get down, and overdubbing the vocal tracks took countless attempts to get it right.

In addition, George Martin reportedly wasn’t thrilled with Ringo’s drumming on “Love Me Do,” and requested a repeat session a week later using a session drummer. John, Paul and George weren’t happy about the decision, but weren’t really in a position to quibble either. Similar to how none of the Beatles had the gumption to tell Pete Best why he was being let go, none of them had the heart, or guts, to tell Ringo what would happen at the studio a week later, so the poor guy was blind-sided when they arrived at Abbey Road to re-record “Love Me Do” without him on the drums.

A bewildered Ringo sat dejectedly and sad-eyed in the booth, only leaving it to occasionally play maracas or tambourine, convinced that his mates were “pulling a Pete Best” on him. He needn’t have worried. George Martin had relented, and the first Beatles single was indeed two original songs by John Lennon and Paul McCartney: “Love Me Do” with “P.S. I Love You” as the B-side, and a version of “Love Me Do” with Ringo drumming was released as the Beatles’ first single in the United Kingdom on October 5, 1962. This was the beginning of a little thing called Beatlemania, and from that day on, rock music would never be the same again.