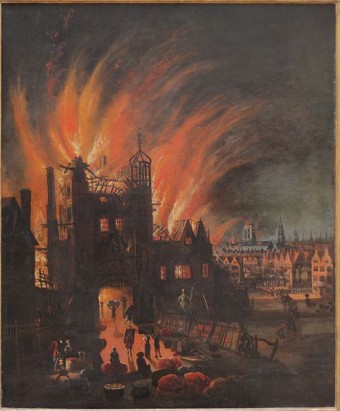 On this day in history, 1666, a fire that came to be known as the “Great Fire of London” was started.

In the wee hours of the morning, what began as a small fire in a humble abode near London Bridge became an uncontrollable inferno that swept through the city for four days. The flames from the house on Pudding Lane, strengthened by a strong easterly wind, didn’t take long to spread to Thames Street, a nearby road lined with warehouses filled with combustible materials- a devastating and deadly combination.

In some ways, the Great Fire of London was almost inevitable. In 1666 London was still a city of medieval structures, constructed of mostly wood and pitch. Walls were usually coated with tar in an attempt to keep out the rain. Houses were crammed together on narrow streets and “fire departments” consisted of people lugging buckets of water. Everything about London at the time screamed fire hazard.

On the night of September 1, Thomas Farrinor, baker to King Charles II, did not completely extinguish his oven before going to bed that evening. Hot embers from the stove ignited a nearby pile of firewood, and it didn’t take long for the entire house to go up in flames. The Farrinor family managed to make their escape out a second floor window, but a bakery assistant wasn’t so lucky and was the first victim to die in the fire.

Sparks made their way across the street and set the straw at the Star Stables quickly and violently ablaze. The highly flammable materials contained in the warehouses lining the streets exploded into flames, rendering the valiant efforts of the local men with buckets of water utterly futile. They finally ceased their efforts to put out the flames and instead collected their families and attempted to save what possessions they could.

To make matters worse, the summer had been particularly hot and dry, and coupled with the strong wind, controlling the blaze seemed almost impossible. The mayor was hesitant to order a fire break because of the property damage that would result(!), but finally a royal command for one was issued, and on September 6 the fire was finally tamed and extinguished.

Though the number of lives lost directly from the fire was incredibly small in light of the scope of the event (with most estimates being 16 or less lives lost), it is estimated that as much of 80% of the city of London was destroyed in the blaze. Tens of thousands of people were suddenly homeless and facing the stark reality of financial ruin, which was particularly harsh with the upcoming winter said to have killed many more of those who lost everything in the fire. The face of the city of London was never to be the same again.

Out of this horrible disaster came two positive outcomes: London had been vexed by a nasty bout of the plague since 1665, and the fire had annihilated most of the rats that carried the disease, vastly diminishing its presence in the city. In addition, when King Charles II ordered Sir Christopher Wren to redesign the city, the plan included buildings constructed of brick, instead of wood, along with wider streets.

The King also commissioned Wren to build a monument to the Great Fire on the site of his baker’s house and scene of the “crime.” St. Paul’s Cathedral was also built at this time, so one of London’s most treasured landmarks rose from the ashes of the Great Fire of 1666.