The First Woman To Officially Run in the Boston Marathon 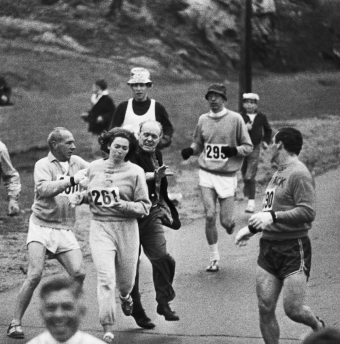 Today I found out about the first woman to officially run in the Boston Marathon, Kathrine Switzer.

“No woman can run the Boston Marathon,” said Arnie Briggs, Kathrine Switzer’s running coach. This coming from a man who had been excited to see a woman start running with the all-male cross country team at Syracuse University. He insisted that women were too fragile to run for 26 miles, though he conceded that if Switzer could do a 26-mile practice run, he’d take her to Boston.

The year was 1966, and despite the Boston Marathon having been in place for nearly seventy years, no woman had officially run in the race. There had been an attempt by another woman named Roberta Gibb, who actually completed the race in April 1966.

Gibb had been denied an entry application to run officially that year. Will Cloney, the Boston Marathon race director that year, wrote her and told her women were not capable of running a marathon, and the max distance allowed for women was only a mile and a half…

Gibb in the course of training for the 26 mile, 385 yard Boston Marathon had several times run upwards of 40 miles in one day, so naturally disagreed with Cloney on his assessment of the fragility of women.

Not allowed to officially enter, she instead hid in the bushes at the start of the race. When the starting gun went off, she eased into the middle of the pack of men. She wore her brother’s Bermuda shorts and a sweatshirt which masked her figure, with the hood up to hide her hair. From a distance, she looked like a man—but the men racing with her noticed rather quickly that she was, in fact, a woman. To her surprise, they were supportive of a woman running alongside them, and Gibbs was allowed to finish the race.

Eventually during the run, she removed her sweatshirt, making it clear to the crowds that she was a woman. Once again, Gibbs was surprised by the response: the crowds cheered and the local radio station announced her progress.

Gibbs ended up finishing ahead of all but 125 of the race’s 415 official entrants that year, with a remarkable running time of three hours, twenty-one minutes. She believed that her feat would open the race up to women, since it would prove that women were strong enough to run the full marathon if they were allowed to do so.

Unfortunately for Switzer, the race hadn’t yet opened up to women by 1967. Three weeks before the race, Switzer and Briggs had their “practice” marathon. At the end of the 26 miles, Switzer insisted they do five more. It had the desired effect: Briggs had a change of heart, and agreed that Switzer should run in the race. However, he also insisted that she register first or face the wrath of the Amateur Athletic Body. They double-checked the rulebook to find that the Boston Marathon didn’t have any official guidelines about gender; Roberta Gibbs had simply faced outright discrimination the previous year when she was denied entry because of her sex.

Switzer signed her entry form “K. V. Switzer,” which is probably how she got in—her initials could have been a man’s, and were a lot less revealing than “Kathrine” would have been.

On Tuesday, April 18, 1967, Switzer hopped in the car with Briggs as well as her boyfriend, Tom Miller, and another man from the university cross country team, John Leonard. They drove five hours to Boston. The marathon would take place the next day.

On Wednesday, Switzer donned lipstick and, somewhat regretfully, a big sweatshirt—it was a cold, snowy day, but she had wanted to look feminine at the start of her first big race. After Switzer had donned her numbers (261) and started warming up, men came up to her wishing her luck. One even asked, “Can you give me some tips to get my wife to run? She’d love it if I can just get her started.”

Feeling support all around, Switzer had no problem lining up at the starting line. Either the officials checking off numbers didn’t care that she was a girl, or they were too hurried and distracted to take notice. When the gun went off, Switzer ran with Briggs, Miller, and Leonard together in a line, with no sign of trouble in sight.

Around mile two, a press truck pulled up alongside the runners, and the cameras focused on Switzer: the first woman to run the Boston Marathon wearing numbers. But someone else took notice, too: Jock Semple, a member of the Boston Athletic Association and the race manager, who was not pleased to find a woman had somehow officially entered the race.

In a rage, he came flying at Switzer and attempted to tear her numbers off, but her boyfriend intervened. Miller was a football player who had no qualms about tackling Semple. When the man landed on the ground, winded, Briggs shouted “Run like hell!” and the group sped off.

At first, Switzer felt humiliated by the whole incident and considered dropping out of the race. But she realized the implications if she did. Like Roberta Gibbs before her, Switzer knew that she had to keep going.  As she later said, she thought while she was running,

I have to finish this race. Even on my hands and knees. If I don’t finish, people will say women can’t do it, and they will say I was just doing it for the publicity or something.

Switzer, Briggs, and Leonard crossed the finish line with a respectable time of four hours, twenty minutes. Switzer’s boyfriend, Miller finished about an hour later. After a few questions from the press, like “What made you do it?” and “Are you a suffragette?” the group was free to celebrate. They weren’t arrested for assaulting a race official as they’d feared (to be fair, he assaulted them first!), but the official had managed to get Switzer disqualified from the race for being a woman, despite no clear-cut rules that women were not allowed.

The effect that Switzer had on the race wasn’t immediately apparent. She faced a lot of negative press for her participation, but she received positive press as well. Over the next few years, Switzer and Gibbs were accompanied by other women who ran in the race unofficially in an attempt to get officials to include women in the race. In 1972, the Boston Marathon finally opened up to women who could run the marathon in three and a half hours or less. In 1984, a major barrier was broken down when the women’s marathon was officially accepted as an Olympic Game. Today, around 53% of runners in competitive events in the United States are women.