The Olowalu Massacre of 1790 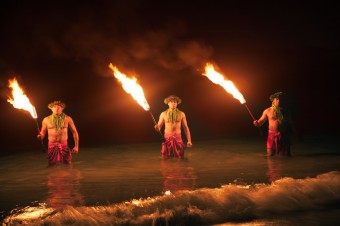 Today I found out about the Olowalu Massacre.

In 1789, Captain Simon Metcalfe and his son Thomas set off on a fur trading mission in two ships, the Eleanora and the Fair American. The ships were separated when the Fair American was captured by the Spanish and taken briefly to Mexico, but the two captains had agreed to a rendezvous point in the case of separation: Kealakekua Bay at the Hawaiian Islands.

The Islands had only been “discovered” by James Cook twelve years before. At first, the Hawaiian natives greeted Europeans as gods. In fact, on Cook’s second visit, they were in the middle of a fertility festival on Kealakekua Bay, which was sacred to the fertility goddess Lono. When Cook’s ship sailed in during the festivities, the natives were certain that the Europeans were some sort of gods. However, relations became strained when one of the European men died aboard the ship, revealing that they were, in fact, mere mortals.

Captain Cook and his men were forced to pack up quickly and sail away, but they returned within the week due to a damaged mast. It was a big mistake. The Hawaiians threw rocks, then stole a small boat from the Discovery. The Europeans fired on them, killing a lesser chief, before the Hawaiians mobbed a group of Europeans, killing Captain Cook on February 14, 1779. His men retaliated by killing some 30 Hawaiians before eventually returning to England.

This makes the location of Captain Metcalfe’s rendezvous point somewhat surprising. But what isn’t surprising is the reception that he and his crew received when they pulled up to the bay. That night, a Hawaiian man named Kaopuiki stole a small boat and killed a man in the process, setting the scene for history to repeat itself.

Sure enough, upon hearing of his crewman’s death, Metcalfe was out for blood. He sailed to Olowalu, where Kaopuiki was from, and told the people he was doing some friendly, nonviolent trading. Some 200 canoes sailed out to greet his ship, all of which were crowded to the starboard side due to a prohibition on the other. Once Metcalfe had them where he wanted them, he showed true colonial hospitality by telling his men to open fire on the canoes.

Around 100 natives were killed and 150 more were seriously injured. Among the dead and wounded were children who had been excited to see the big foreign ship up close. This incident alone is termed the “Olowalu Massacre,” but there was much more bloodshed to follow.

Hearing of the uncalled-for slaughter of so many innocent Hawaiians, Chief Kame’eiamoku swore he would kill the next white man he saw. Soon after, the Fair American anchored in the harbor. The chief seized the ship and killed every man on board save for Isaac Davis. On shore, another white man was detained—John Young from the Eleanora, who witnessed the attack and rushed to tell his captain before he was taken captive by the Hawaiians.

Metcalfe set sail unaware of the Fair American’s fate. Meanwhile, Chief Kame’eiamoku used the ship and the two skilled white navigators to his advantage. He handed the ship and the white men over to King Kamehameha I, who was fighting for control of the islands. Young and Davis showed Kamehameha and his men how to use the artillery aboard the ship.

Kamehameha went on to win a key victory against his rival Chief Kahekili using a canon from the ship. So many bodies piled up in the nearby ‘Iao Stream that the Hawaiians called it the Battle of Kepaniwai, which meant “the damming of the waters.” The battle proved to be significant, and it was only a matter of time before Kamehameha successfully united the Hawaiian Islands under his banner, so to speak.

After directly and indirectly causing so much death and destruction, you might be happy to know that Simon Metcalfe’s life didn’t have a happy end. Not much is known about his adventures after he left Hawaii, but the promise of good trade must have taken him to the Queen Charlotte Islands off the coast of British Columbia in 1794. There, he started a friendly trade with the local Haida people. Perhaps feeling overly confident due to his previous successes over native people, Metcalfe allowed a huge number aboard his ship in the name of trade.

The Haida knew that they had the upperhand—the European men were greatly outnumbered. They attacked, and within a few minutes nearly everyone on board—including Captain Metcalfe—was dead. Only one man was smart enough to climb up into the rigging, and when he came down he was taken as a prisoner. The only reason we know the fate of the crew of the Eleanora is that the man was then ransomed off and found his way back to Hawaii, where he told the tale to John Young. Young then passed the story along to every ship that sailed through the islands.