This Day in History: September 26th 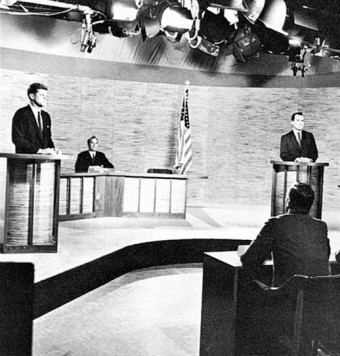 For the very first time, a debate between U.S. presidential candidates was broadcast on television for the consideration of the American people. The two presidential hopefuls were a Democratic Senator from Massachusetts named John. F. Kennedy, and the Vice-President of the United States, Richard M. Nixon.

Kennedy went into the debate with several disadvantages. Outside of his home state of Massachusetts, he was relatively unknown. He was also young and Roman Catholic, neither of which would work in his favor with many voters; and he was going up against an incumbent to boot. All daunting challenges, but Senator Kennedy managed to pull it off – and then some.

Kennedy and television was a match made in heaven. TV played a huge part in securing the charming and photogenic Kennedy’s presidency, but the effects were even more far-reaching than that. This single 60-minute debate between the debonair and tanned Irish- American and the ill-at-ease pale guy changed how political campaigns were run and how television media covered them forever.

“It’s one of those unusual points on the timeline of history where you can say things changed very dramatically — in this case, in a single night,” says Alan Schroeder, a media historian and associate professor at Northeastern University, who authored the book, Presidential Debates: Forty Years of High-Risk TV.

Ted Sorenson, Kennedy’s speech writer and aide, recalls helping the candidate prep for the debate on the roof of their hotel in Chicago, quizzing Kennedy on topics that were likely to come up during the course of the debate. After many hours of honing responses to likely questions and giving a speech before a labor union, Kennedy went to take a nap before the big show. “The story I like to tell is of when they delegated me to go wake him up,” Sorensen said. “I opened the door and peaked in and there he was, lights on, sound asleep, covered in notecards.”

What happened when the two candidates got behind their podiums is not surprising. Nixon looked waxen and underweight from a recent hospitalization, while Kennedy appeared healthy, tan, calm and confident. Interestingly, many of those listening to the debate on the radio though that Nixon had won – but those radio listeners were in the vast minority. 88% of American households had television sets by 1960. Those watching the debate on TV declared Senator Kennedy the clear winner. (Ah politics, clearly the issues and a politician’s stance on things, intelligence, and wisdom are what is most important. ;-))

Many believe that Kennedy won the election that very night. At a campaign event in Ohio the day after the debate, the crowds were much larger than they had previously been. That’s when the Kennedy team knew that at the very least they had gained vast support within the Democratic Party.

Nixon stepped up to the plate and did much better in the following debates, but the damage had been done. Even Kennedy was quick to acknowledge the huge role that television had played in his election as president in November 1960. “With the Nation Watching,” a 1979 task force report, notes, “The Nixon-Kennedy debates made televised encounters between candidates the hottest thing in electioneering since the campaign button.”

Given that Kennedy ultimately went on to beat Nixon by just 120,000 votes (.2%) in the popular vote, it seems pretty clear that without the help of TV, Nixon would have won, not Kennedy. Imagine how history would have been different had it not been decided to televise these debates.