This Day in History: September 27th 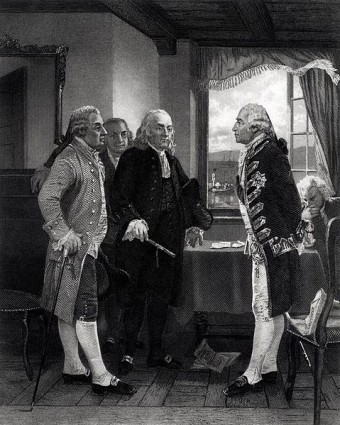 For the purpose of negotiating treaties of peace and commerce with Great Britain during the American Revolutionary War, John Adams was appointed on this day in history by the Continental Congress as minister plenipotentiary, and sent to France to carry out his duties.

Adams had traveled to Paris once before; he had tried to arrange an alliance with the French in 1778, but had been abruptly shunted aside when Congress chose the silver-tongued Benjamin Franklin as sole commissioner instead.

Not long after his return to Massachusetts in 1779, he was elected as one of the state delegates responsible for drawing up a new constitution, and this is what he was occupied with when news of his new diplomatic post reached him. Adams left for Europe in November in the company of his sons, John Quincy and Charles, arriving in Paris in February of 1780.

Adams was a conscientious correspondent, reporting to Congress almost daily, and sometimes even more frequently. His letters included information on such topics as British politics, naval activities of both of the British and French, and his own general perspective of all of Europe, in general.

The outlook for peace wasn’t good at the time – things were going badly for the Continental Army, and John Adams’s tendency to be blunt bordering on confrontational often led to problems with France’s Foreign Minister Charles Gravier, Comte de Vergennes. Adams began pressuring Vergennes by mid-June for French naval assistance, which annoyed not only Vergennes but Ben Franklin, who was concerned enough to bring the issue to Congress.

By then, Adams was already en route to Holland, where his objective would be to secure a loan from the Dutch. He was appointed American minister to the Netherlands before the end of the year, replacing the unfortunate Henry Laurens who was captured by the British at sea. Due to the insistence of Vergennes and other French diplomats, in June 1781, Congress bowed to pressure and removed Adams’s sole powers as peacemaker with Great Britain, ordering Franklin, Thomas Jefferson, John Jay and Laurens to work alongside Adams.

Finally, the wheel of fortune was turning in America’s favor, and they had the upper hand in the war. Adams traveled back to Paris in 1782 to take his part in the upcoming peace negotiations. In the end, the job of securing American interests fell to Adams, Franklin and Jay, as Jefferson didn’t travel to France, and Lauren’s health was very poor after being released from the Tower of London.

Unlike Franklin, both Adams and Jay had a deep distrust of the French government, but their contrasting opinions and diplomatic approaches made it possible for them to negotiate favorable terms in 1783 in the Peace of Paris.

Jefferson replaced Adams the next year as American minister to France, which led to a lasting friendship between the two men before Adams left to start his new job as American ambassador to London, and a long and distinguished career of foreign service to the fledgling nation.