December 14th: The Wright Brothers Attempt to Fly Their Wright Flyer for the First Time and Crash 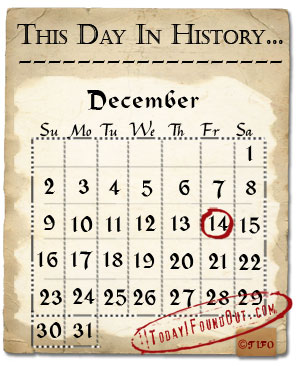 On this day in history, 1903, the Wright brothers took their Wright Flyer out in their first attempt to fly it.  The date of their first attempt would have been a day sooner, but they had promised their dad they would not fly on the Sabbath, so waited until Monday the 14th.  The plane “flew” only for a few seconds because it stalled out right away when Wilbur Wright pulled up too sharply as soon as the plane was in the air. The brothers had originally intended to test the flyer out first as a glider, to get a feel for how it handled, but due to significant delays in constructing it on sight, decided to just try it out as a powered, manned aircraft right away. This resulted in Wilbur underestimating the sensitivity of the elevator, causing him to climb too quickly and ultimately crash shortly after lifting off.

Three days later, after repairing the damage done to the craft in the first flight attempt, Orville took his turn at the controls and this time made a slightly more successful flight, though he too underestimated the elevator sensitivity, resulting in him flying in something of a sinusoidal pattern before crashing.  Before his “landing”, though, he managed to fly the plane for about 12 seconds and a distance of around 120 ft.

After minor repairs, the two took turns with the longest flight of the day lasting 852 feet and spanning 59 seconds.  Unfortunately, the Flyer was damaged after this flight and before the two could repair it for future flights a gust of wind came up and toppled the craft, damaging it beyond immediate repair (though it was many years later mostly repaired for display in museums).

Whether this was actually the real first manned, powered flight is up for debate.  Many people before this had developed successful gliders (including the Wright brothers), some developed successful powered craft, though not manned, and there are a few others with reasonably credible stories that claimed to have created and flown manned, powered aircraft.  The Wright brothers themselves didn’t claim to be the first in their patent for their invention.

Whether they were the first or not, what did set the Wright brothers’ craft apart from many other claimants of the day was that their craft was not only powered and capable of carrying a person, but it was also fully controllable.  Further, the three-axis system they developed for control is not too dissimilar to the way planes today are controlled.  It was this “aerodynamic control system” that they ultimately patented.

On their first flights, they only flew the Flyer straight, but it was capable of being fully controlled including controlling elevation and turns.  Although the Flyer 1 was damaged too severely before they had the chance to test turning, the Flyer II and Flyer III both demonstrated this ability marvelously.  The Flyer II, which was very similar in design to the Flyer I but with a more powerful motor and made from a different type of wood, flew 105 times and the brothers were able to achieve flight times as much as five minutes long, often flying in full circles.   With the Flyer III, they did even better, including one flight where Wilbur flew in circles for 39 minutes straight and a distance of 24 miles on October 5, 1905.

For those interested, the Flyer 1 had a wingspan of 40 feet; weighed around 605 pounds with nobody on board; was powered by a custom built four cylinder, 12 hp engine; and it could fly at a max speed of around 30 mph.