The “Australian” Shepherd Breed was Developed in America 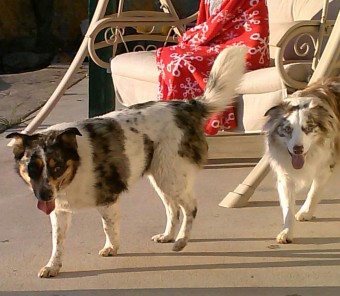 Today I found out the Australian Shepherd breed of dog was developed in the United States, not Australia.

The Australian Shepherd is a popular breed throughout the United States, prized for its intelligence and good temperament. However, in spite of its name, the Australian Shepherd does not originate from Australia, but was developed on American soil. The breed was developed in the 19th century for herding purposes. Many immigrants brought sheep and other livestock with them, and to help manage the flocks, they also brought their favorite herding dogs. Although many dogs that arrived at this time were from Australia, it is believed that the primary ancestors of today’s Australian Shepherd were from Germany or Spain’s Basque region.  There is also compelling genetic evidence indicating that the Australian Shepherd has ancestors that came over to the Americas on the Bering Land Bridge; so in some sense, at least part of the breed might be considered “native”.

The breed particularly became well known and started to be sought after for their herding ability in the Colorado Rockies, as these dogs are able to maintain their high energy levels, even in extremely high altitudes and frigid weather.

Somewhat more humorous than the “Australian” bit being incorrect is that once the breed finally became official, most “Australian Shepherds” were not used for herding anymore. They were not officially recognized until 1957, when the Australian Shepherd Club of America (ASCA) was first formed, and the current breed description was not formulated until 1977.  It took another 16 years before the American Kennel Club (AKC) recognized the breed.

However, long before they became “official”, the dog was bred and often used for herding. Despite its small size, it is extremely athletic, with strength and stamina to work all day without much decrease in its alertness, speed, or agility. It also is extremely protective of its flock- whether animals or, more typically today, humans- and has a natural tendency to want to herd, as you’ll quickly find out if you send a group of kids randomly running in every direction with one of these dogs around.  This is also one dog that is not intimidated by the elements. Its thick coat has a water-resistant outer layer and an inner, finer coat for extra warmth.

As to why the breed is called “Australian” despite being bred in America, with even its ancestors not coming from an actual Australian breed, the leading theory is that the dog perhaps used to commonly be used to herd imported Australian sheep.  However, this is mostly speculation, and the dog was also used to herd many other things.  A slightly more tenable speculative theory about why Australian Shepherds are called that is that they have a blue merle color pattern, similar to many dogs brought over from Australia to America; thus, because of the color pattern, they were simply called “Australian” as so many other dogs were that had the blue merle coloring at that time.  Despite the breed not being officially established until relatively recently, the original name stuck when they finally got registered.