This Day in History: December 8 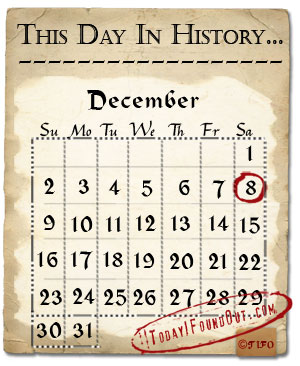 On this day just two years ago, SpaceX became the first privately held entity to successfully launch a spacecraft into orbit and then subsequently recover it (they were also the first private company to launch something in orbit with a liquid-fueled vehicle around a year earlier when their Falcon 1 rocket put a satellite in orbit).  The craft used in this recent launch was the SpaceX Dragon, launched using SpaceX’s Falcon 9 rocket (this was the second flight of the Falcon 9) at 10:43 a.m. EST.  It took approximately 10 minutes for the Dragon capsule to reach orbit, at which point it detached from the rocket at around 190 miles above the Earth.  It then orbited the Earth for about three hours while various tests were run, before SpaceX brought the craft back down and retrieved it within 20 minutes of splash down off the west coast of Northern Mexico.

The only cargo the Dragon carried on its maiden orbital voyage was a wheel of Le Brouère cheese inside a barrel with a poster from the comedy film Top Secret taped to the top.  The cheese was in homage to a skit done on Monty Python’s Flying Circus in episode 33 where John Cleese walks into a cheese shop to buy cheese, but it’s a cheese shop that has no cheese.  Even though on its first orbit the Dragon carried no significant cargo, it is actually designed to carry payloads of up to 13,000 pounds, including a human crew of up to 7 astronauts, and can hold up to 850 cubic feet of cargo in its standard configuration and up to 1600 cubic feet in an extended version. It is also designed to be fully reusable and will soon be used to deliver various cargo to the International Space Station.  Further, while the craft right now only lands in water, much like previous craft designed by NASA, it soon will have a system in place for landing on land using thrusters.

SpaceX was founded by Elon Musk, who incidentally was the inspiration for Robert Downy Jr.’s character portrayal of Tony Stark on Iron Man.  One of the goals of SpaceX is to attempt to reduce the cost of launching something into space by a factor of 100, something they are well on their way to achieving. Musk began his very impressive entrepreneurial career in South Africa.  At the age of 10, he saved up and bought his own computer.  He then taught himself how to program and, at the age of 12, created a computer game called “Blaster” that he managed to sell for $500 to a computer magazine.

His next venture was to use those funds to start an arcade.  However, he was unable to get a permit, due to his age, and so started a home-made chocolate selling business instead, which he ran for a time, selling to classmates.  By the time he graduated, with these ventures and proper investment in the stock market, this resulted in his net worth already being in the several thousand dollar range.

After earning a bachelor’s degree in Physics and a bachelor’s degree in Economics, he dropped out of his PhD program after only 2 days and started an internet based company, Zip2, instead.  Zip2 was more or less an online content publishing portal and directory, though Musk originally had much bigger plans for it, more along the lines of something like what Yahoo became, but was ultimately blocked from implementing those plans by other shareholders.  Even so, four years after it was founded, Zip2 sold for $341 million to Compaq’s AltaVista.  Musk was entitled to around $22 million of that $341 million.

Musk then immediately got involved in co-founding a company called x.com, which would later become PayPal when it merged with Confinity.  Three years later, PayPal was acquired by eBay for a cool $1.5 billion with Musk this time being entitled to around $176 million as PayPal’s largest shareholder.

He followed this up by founding Space Exploration Technologies (SpaceX), investing nearly $100 million in the highly risky endeavor (though they have signed a $1.6-$3.1 billion contract with NASA for 12 flights to the International Space Station and more recently some military contracts, so it seems to be working out so far).

During this time period, he also helped found Solar City and the highly touted electric car company, Tesla Motors. Solar City is now the largest solar system provider in the United States.  They help design systems for businesses and home use, as well as provide financing and installation services.  They also are involved in creating charging stations in the U.S. for electric vehicles.

So after 38 years on this planet, Musk managed to design and sell a video game; earn two bachelor degrees; help design and sell one the web’s first major online content publishing platforms; helped design and implement PayPal, the world’s largest internet payment platform; helped found what is now the U.S.’s largest solar system provider; helped design a new kind of rocket from the ground up that managed to cut the cost of launching cargo into space by a huge margin, was the first such commercial liquid fueled rocket to put a satellite in orbit and to retrieve something from orbit, and will now be used by NASA for their missions; and helped design and build the first commercially viable electric car to come out in the last century.  More remarkable than that is he did the latter five things on that list in a span of only around 14 years.  He also managed to have five sons with his now ex-wife, Justine Musk, and just recently got married again to actress Talulah Riley.  He probably could use a vacation.