This Day in History: December 7 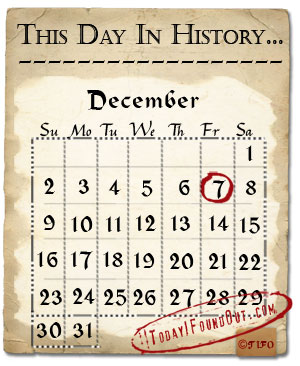 On this day in history, December 7:

1869: Former Confederate guerrilla fighter Jesse James turns to a life of crime, robbing the Davies County Savings Association in Gallatin, Missouri.  Over the next 14 years, James and his gang committed a variety of robberies and murders.  Despite often being portrayed in his day as a “Robin Hood” type, robbing from the rich and giving to the poor, James and his gang kept every dime they stole.

During this first known robbery, James also murdered the cashier, who he thought was another man.  The cashier was Captain John Sheets.  James thought he was Colonel Samuel P. Cox, a former Union soldier who led the soldiers who killed one of James’ former commanding officers, “Bloody Bill” Anderson, during the war. So James killed him to avenge his friend and commanding officer, but in fact, the man he killed had nothing to do with the death of Bloody Bill.

Jesse James was ultimately shot and killed by Robert Ford.  R. Ford and his brother, Charley, were friends of James, and fellow outlaws, who had cut a deal with the Governor of Missouri to bring James in.  They, however, felt it more expedient, and easier, just to kill James and bring in his body. Thus, before a planned robbery, Robert stood behind James and simply pulled out his gun and shot him in the back of the head, with James being none the wiser that his life was about to end.

The brothers were charged with murder and sentenced to execution by hanging, but the Governor pardoned them shortly thereafter and they were given some of the reward money for bringing James in, with the rest being taken by Marshal Henry H. Craig and Sheriff James Timberlake.

1930: What may be the first ever TV commercial in the U.S. was broadcast on Boston’s W1XAV.  The show being broadcast at the time was CBS Radio’s The Fox Trappers.  I.J. Fox Fuerriers was paying to sponsor the radio show. Thus, when W1XAV broadcast the show on their TV station, it resulted in the advertisement being included in the broadcast.  At the time, the Federal Radio Commission, which eventually became the Federal Communications Commission (FCC), had a blanket bank on any commercials on TV.  Obviously this commercial slipped through the cracks.  At the time of the broadcast, W1XAV had about a 500 watt signal.  For comparison, TV stations today in North America can range as high as 100 kW in their video broadcasting power.