This Day in History: December 10 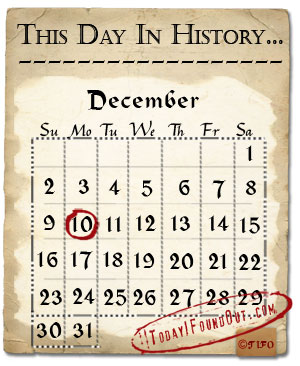 On this day in history, December 10

1868:  The first traffic lights are put in place using semaphore arms during the day time and at night using gas lamps with red and green as the traffic light colors.  This was all spurred on because in London, England in 1865 there was a growing concern over the amount of horse-drawn traffic causing danger to pedestrians trying to cross the roads. A railway manager and engineer named John Peake Knight, who specialized in designing signaling systems for the British railway, approached the Metropolitan Police with the idea of using a similar semaphore/lighted system for road traffic as was used for railroads.  In the daytime, this semaphore method used an arm or arms that could be raised or lowered by a police officer, notifying carriages when they should stop when the arm(s) stuck out sideways.  At night, his system used the red and green colors to indicate the same type of thing, again traditional to the railroads.

His proposal was accepted and, on December 10, 1868, the system was put in place at the junction of Great George and Bridge Street in London, near Parliament. The system worked extremely well… for about a month. That’s when one of the gas lines that supplied the lights began to leak. Unfortunately, the policeman who was operating the arm was unaware of the leak and ended up being severely burned when the lamp exploded. Thus, despite its early success, the semaphore traffic system was immediately dropped in England.  More on the History of Traffic Lights

1884: The Adventures of Huckleberry Finn is published in Canada and England (published about two months later in the United States).  The book was initially set aside for several years, unfinished, before Twain decided to return to it and complete it.  Once published, it was controversial from the outset and has remained so to this day.  In the 1950s, CBS even went so far as to air a TV version of Huckleberry Finn without the character of Jim at all and their version never mentioned slavery; of course, such a version completely misses the point of the whole story, but heaven forbid we should actually get anything meaningful out of our entertainment- nothing but cotton candy for me please!

Upon its initial release in the United States, it was banned in many libraries right off the bat.  For instance, the Concord Public Library in Massachusetts:

Mark Twain’s response to this?

The Brooklyn Public Library also later banned the book for its “obscenity” and being poorly written.  For instance, they specifically cited the fact that Twain had Huck Finn at one point “itch and itch”.  Twain’s response was, as ever, marvelous:

1901: The Nobel Prizes are awarded for the first time. Founded by “The Merchant of Death“, Alfred Nobel, as a way to improve the way history would remember him. After his brother, Ludvig, died in 1888 and a French newspaper mistakenly thought it had been Alfred Nobel himself who died, the newspaper published the obituary under the title: “The merchant of death is dead”, going on to state: “Dr. Alfred Nobel, who became rich by finding ways to kill more people faster than ever before, died yesterday.”

1907:  Over 100 medical students organize a riot that swells to well over 1,000 people clashing with police in London.  The medical students were enraged by a statue of a dog in memorial of one that had been vivisected (operating on an animal while alive for research purposes).  The statue had been erected with the following words on a plaque:

In Memory of the Brown Terrier Dog Done to Death in the Laboratories of University College in February, 1903, after having endured Vivisection extending over more than Two Months and having been handed from one Vivisector to Another Till Death came to his Release. Also in Memory of the 232 dogs Vivisected at the same place during the year 1902. Men and Women of England, how long shall these Things be?

This sparked student protests starting on November 20, 1907 and carrying on into 1910, with frequent, often violent protesting and attempts to destroy the statue.  The pinnacle of these protests occurred on this day in 1907 when well over 1,000 people clashed with some 400+ police after an organized effort by medical students to destroy the statue.

In the end, the statue was removed on March 10, 1910 due to all the controversy and the mounting police costs to protect the statue from constant attempts to destroy and deface it.  Removing the statue in turn gave rise to protests by people wanting the statue put back, but after it was completely destroyed, those protests died down.  A new version of the statue was later put up on December 12, 1985, funded by the National Anti-Vivisection Society and the British Union for the Abolition of Vivisection. It was briefly removed in 1992, but relocated to a more secluded location in 1994 in the Woodland Walk of Battersea Park.