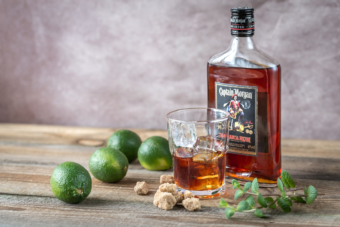 Today I found out how rum is made.

Rum was once used as a medium of economic exchange in lieu of money.  At one point in Europe, Rhode Island rum was even used as an accepted substitute for gold in economic exchanges.  This drink, which first began being made as we know it today around the 17th century, quickly became one of the most popular alcoholic beverages in the world, before somewhat falling out of favor for a variety of reasons including legal restrictions on rum in the Caribbean. Although, rum has seen a huge upswing in popularity in the last decade, no doubt partly fueled by Hollywood, appearing in such films as the Pirates of the Caribbean series.

The base ingredients for rum are generally molasses, yeast, and water.  However, certain higher end rums, such as Zacapa premium rum, don’t use molasses.  Rather, they substitute sugarcane juice, also known as “virgin sugar cane honey”, for the molasses. The use of sugar cane, whether in producing molasses or using the juice, in rum is largely what distinguishes it from many other types of liquors.

Once the molasses is made or the juice has been pressed from the sugar cane and used directly, it is mixed with water and yeast.  The yeast used for the fermentation step varies by distillery.  Some will use “natural” fermentation where they allow the yeast from the environment to ferment the mixture.  In this case, the vats are left open to the air to allow the yeast in the air access.  On the other end of the spectrum, some distilleries are very careful to only use specific yeasts they add to the mixture.  In either case, the fermentation stage typically takes between a few hours to a few weeks, depending on the method and types of yeasts used.  Typically, the “natural” fermentation method will take the longest.

Next up is the distilling process.  Here the now fermented liquid is placed in a still. With rum, this is usually done with a column still, though sometimes it is done with a pot still.  With whatever type of still is used, the fermented liquid is heated to somewhere in the vicinity of 175 degrees Fahrenheit, which causes the alcohol to evaporate.  The vapor from the still is then collected and re-condensed.  At this point the condensed vapor will typically be between 40% and 98% alcohol, depending on the still and other such factors, and can be bottled and sold as rum, if the manufacturer doesn’t choose to process it any further.  Most major manufacturers, particularly those producing higher end rums, will instead choose to age the rum first.

Typical minimum aging, if aging is going to be done at all, will be around one year.  However, in the higher end rums, it isn’t uncommon for those rum makers to have batches aged for decades.  During the aging process, the type of container the rum is stored in has a dramatic effect on the resulting color and flavor.  For instance, when stored in stainless steel tanks, the rum will stay almost clear.  When stored in oak casks, the rum will become very dark.

Once the rum is aged the appropriate amount of time, it may be bottled and sold as is, or, more commonly, it will be mixed with other rums aged for a different time period and possibly the new mixture will be aged again.  The final product will also commonly be filtered to adjust the color or, if the rum maker wants a darker color, caramel will typically be added.  Water may also be added to adjust the strength of the rum.  At this point, the rum is ready to be bottled and sold.