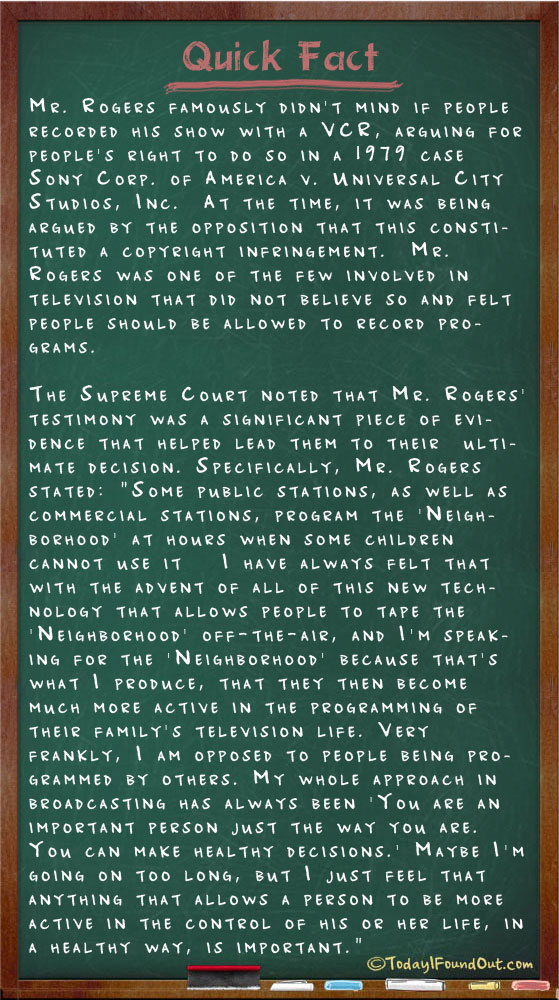 Mr. Rogers famously didn’t mind if people recorded his show with a VCR, arguing for people’s right to do so in a 1979 case Sony Corp. of America v. Universal City Studios, Inc.  At the time, it was being argued by the opposition that this constituted a copyright infringement.  Mr. Rogers was one of the few involved in television that did not believe so and felt people should be allowed to record programs.

The Supreme Court noted that Mr. Rogers’ testimony was a significant piece of evidence that helped lead them to their  ultimate decision. Specifically, Mr. Rogers stated: “Some public stations, as well as commercial stations, program the ‘Neighborhood’ at hours when some children cannot use it… I have always felt that with the advent of all of this new technology that allows people to tape the ‘Neighborhood’ off-the-air, and I’m speaking for the ‘Neighborhood’ because that’s what I produce, that they then become much more active in the programming of their family’s television life. Very frankly, I am opposed to people being programmed by others. My whole approach in broadcasting has always been ‘You are an important person just the way you are. You can make healthy decisions.’ Maybe I’m going on too long, but I just feel that anything that allows a person to be more active in the control of his or her life, in a healthy way, is important.”