Elizabeth Taylor was at One Time Carrie Fisher’s Step-Mother 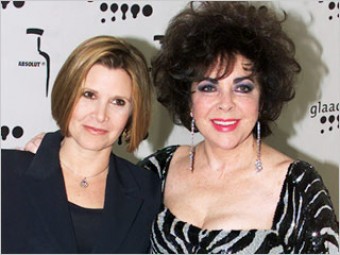 Today I found out Elizabeth Taylor was at one time Carrie Fisher’s step-mother.

Carrie Fisher, who’s best known for her role as Princess Leia in Star Wars, is the daughter of famed entertainers Eddie Fisher and Debbie Reynolds.  At the height of Eddie Fisher’s fame as a singer and eventual TV show host in the 1950s, he married actress Debbie Reynolds, with the two staying married for four years, from 1955-1959.  Carrie Fisher was born just a year after the two were wed in 1956.

When Eddie Fisher divorced Reynolds in 1959, he quickly married one of Reynolds’ best friends, Elizabeth Taylor who was also the widow of his former best friend, producer Mike Todd, who had died in 1958.  After Todd’s death, Fisher and Taylor became close and began having an affair that ultimate resulted in him divorcing Reynolds.  The marriage with Fisher was surprisingly Elizabeth Taylor’s fourth marriage, even though she was at the time only 27 years old.  The two stayed married for five years and divorced in 1964 when Carrie Fisher was 9 years of age.

From there, Fisher married three more women throughout his life (making a total of five), two of which he later divorced and one that died in 2001 while the two were still married, that one being his longest marriage, lasting nearly nine years.  Elizabeth Taylor went on to marry another four men (making a total of seven husbands and eight marriages).  Her final husband was Larry Fortensky who was a construction worker she met at the Betty Ford Clinic. 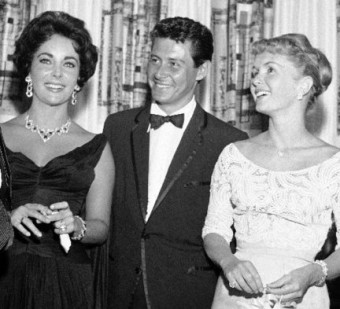 Interestingly, despite the fact that Reynolds’ husband left her for Elizabeth Taylor, the two women eventually became friends once again, after, by chance, they were traveling together on a cruise liner and decided to make up. They also did a made for TV movie together called These Old Broads where a bit in the movie includes the two making fun of a character named “Freddie” who was the ex-husband the two characters had both at one point been married to.  Incidentally, These Old Broads was co-written and produced by Carrie Fisher.