There Once was a Man Hit on the Head By A Falling Baby, Twice! 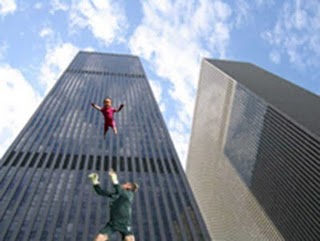 Today I found out there once was a man was hit on the head by a falling baby… twice!

According to Time Magazine (Miscellany, Oct. 17, 1938), the year of the first event was 1937. Joseph Figlock, a local street sweeper in Detroit, Michigan, was walking down the road when a baby fell from a 4th story window. The baby struck him on the head and shoulders. The tackling toddler was thankfully not killed. However, he and Mr. Figlock were both injured.

The following year, another mother of the year candidate, allowed her 2 year old son David Thomas, to fall from a window. Joseph, doing his job sweeping out an alley, was again struck by the tumbling tyke. Remarkably, once again neither the ankle-bitter nor the newborn nabber were killed.

Joseph must be some catch, both figuratively and literally. Not only can he ensnare small children like a German Shepard at a Frisbee throwing competition, but women seem to toss their offspring at him like rice at a wedding! One thing is for sure, if you lived in Detroit in the 1930s and you threw your baby out with the bathwater, Mr. Joseph Figlock was going to be there to save the day!