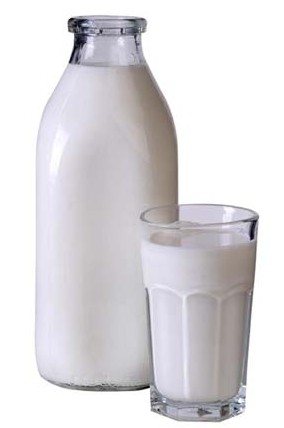 Today I found out why milk is white.

Milk is made up of about 87% water and 13% solids, such as fat and various proteins.  Chief among these proteins is something called casein, four types of which make up about 80% of the proteins in milk.  The casein protein molecules are typically suspended somewhat uniformly throughout the milk and are spherical, about a micrometer across.  The reason they are typically somewhat uniformly suspended in the liquid is because kappa-casein molecules have a negative electrical charge, so they repel each other.

White objects in nature appear such when there is some level of light diffusion going on and no part of the visible spectrum gets reflected off the object any more than any other part of that area of the light spectrum.  So as you might guess from that, these casein proteins and some of the fats in the milk scatter and deflect light somewhat uniformly throughout the visual spectrum.  This results in milk being fairly opaque and appearing white to our eyes.  Without the fats though, casein itself tends to scatter the blue wavelength slightly more than red.  So with something such as fat free skimmed milk, you’ll sometimes see a very slight blue-ish tinge to the otherwise white milk because of this.

Milk also contains riboflavin, which can give the milk a slightly green-ish tinge, if the concentration is large enough, such as can also be seen sometimes in certain types of skimmed milk or whey products (the riboflavin is in the whey portion of the milk).

Another hue you’ll occasionally see in milk is a slight yellow color.  When you see this, it is due to small amounts of carotene that are present in the milk.  You will see this particularly in milk from Guernsey and Jersey cattle.