“Hip Hip” in “Hip Hip, Hooray” Was Once an Anti-Semitic Phrase 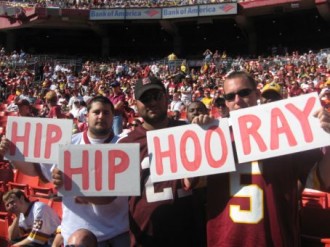 Today I Found Out the “Hip Hip” in “Hip Hip, Hooray” was once anti-Semitic.

This phrase is thought to have its origins in the middle-age Latin battle-cry “Hieroslyma est perdita’, which means “Jerusalem is fallen” or “Jerusalem is lost”.  This was later shortened by Germanic tribes fighting Jews to “Hep Hep Hu-raj”, meaning loosely “Jerusalem is fallen and we are on the way to paradise.”  This also found its way into a Hungarian battle cry “Huj Huj Hajrá”, which more or less just meant “faster, faster”.  An alternative theory is that it comes from a Germanic shepherds cry or a hunter’s cry “hep hep”, which was used to rally their trained dogs.  It is also possible that this shepherds cry was not the origin, but rather itself was from the proposed Germanic battle cry “Hep Hep Huraj”.

Whether one of the above origins is true or not, “hep hep” was the rallying cry of the rioters in the “Hep Hep Riots” of the 19th century.  These riots against the Jews began on August 2, 1819 in Würzburg, Germany.  They subsequently spread across parts of Denmark, Poland, Latvia, and Bohemia.  In many regions, troops had to be called in to prevent the mass massacre of the Jewish population in those areas.  Most Jews quickly fled the cities at the start of the riots and camped out in remote regions until things calmed down, eventually returning to their often destroyed homes.  As one Jew, Rahel Varnhagen, who had converted to Christianity and thus was relatively safe in the riots stated:

I am infinitely sad on account of the Jews, in a way I have never experienced before… What should this mass of people do, driven out of their homes? They want to keep them only to despise and torture them further… I know my country. Unfortunately. For the past three years I’ve said the Jews will be attacked. I have witnesses. The Germans wax bold with indignation, and why? Because they are the most civilized, peace-loving, and obedient people… Their newfound hypocritical love for Christianity (may God forgive my sin) and the Middle Ages, with its poetry, art, and atrocities, incites the people to commit the only atrocity they may still be provoked to: attacking the Jews!… Their hate does not stem from religious zeal: how can they hate other faiths when they don’t even love their own?

At some point after these Hep Hep Riots, it’s not entirely known when, this now anti-Semitic rallying cry of “hep hep” became “hip hip” and the response cry of “hooray” became traditional.