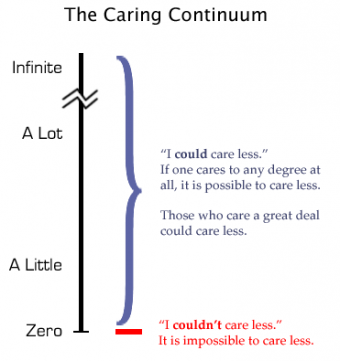 These two phrases are often used interchangeably when someone is referring to something that they don’t care about at all, even though the latter implies that you do care somewhat, possibly a lot or just a little; it’s unclear from the statement itself. The former leaves nothing in doubt. You absolutely don’t care at all, implying even a modicum of caring would be more than what you feel.

The correct expression, “I could not care less” or, alternatively, “I couldn’t care less”, originally came to the United States in the 1950s from Britain. The use of the expression in Britain is documented as far back as the 1940s and is thought to have been somewhat common for at least a decade before that. The first documented case of the incorrect form “I could care less” was in 1966, in the United States. It’s not clear why the drop of the “not” in that phrase became common in the United States. It’s possible it is due to a misunderstanding of the original intent of the phrase or, more likely, simple laziness in speech.