Is There Really an Area of Yellowstone Where You Can Get Away With Murder? 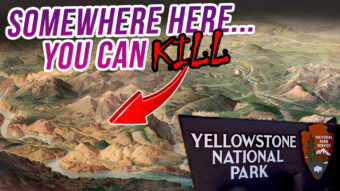 One of the crown jewels of the American National Park system, Yellowstone spans nearly 9,000 square kilometres of northwestern Wyoming – an area of breathtakingly beautiful landscapes including mountains, canyons, lakes, rivers, and geothermal springs. Created by the American government in 1872, Yellowstone contains some of the popular and beloved natural attractions in the United States, such as the Grand Prismatic Spring and the Old Faithful geyser, and is visited by nearly 2 million tourists every year. But for all its natural beauty,Yellowstone can be a dangerous place, from the scalding waters of its thermal pools to its wildlife – particularly its resident population of black and grizzly bears. But the park’s greatest danger may not be natural but rather legal, for on the western edge of Yellowstone lies a 128-square-kilometre zone where, thanks to a combination of poorly-drawn boundaries and a constitutional loophole, one could theoretically commit any crime and get away with it scot-free. This is the strange story of the Yellowstone Zone of Death.

The Zone of Death first came to light in 2005 thanks to an academic paper by Michigan State University law professor Brian Kalt, entitled The Perfect Crime. In the paper, Kalt points out that while Yellowstone National Park sits almost entirely within the state of Wyoming, around 3%  of the park spills over north into Montana and around 1% west into Idaho. However, the park falls under the jurisdiction of the Federal Government, which for reasons of convenience placed the entire area within the Congressional district of Wyoming – and here, according to Kalt, is where the trouble starts. According to Article III, Section 2 of the U.S. Constitution:

“The Trial of all Crimes, except in Cases of Impeachment, shall be by Jury; and such Trial shall be held in the State where the said Crimes shall have been committed…”

While, according to the so-called vicinage clause of the Sixth Amendment:

“In all criminal prosecutions, the accused shall enjoy the right to a speedy and public trial, by an impartial jury of the State and district wherein the crime shall have been committed…”

Ordinarily, forming such a jury is a straightforward matter, for the boundaries of states and congressional districts almost always overlap exactly. But the tiny slivers of Yellowstone which extend into neighbouring states are a unique exception, for these areas lie both within the states of Montana and Idaho and the congressional district of Wyoming. Thus, if a crime were to be committed in either of these areas, according to the vicinage clause a constitutional jury could only be formed from people living within that zone. In the Montana zone this is somewhat less of a problem, for a handful of people do live in the area and could theoretically be called for jury duty. However, according to the 2022 census, the 128-square-kilometre region of Yellowstone within the state of Idaho has a human population of zero. This is, as you can imagine, something of a problem, for if a jury cannot be formed, then a trial cannot be held and a case cannot be prosecuted. This means that within the so-called Zone of Death, one could theoretically commit any crime with absolute impunity – even murder.

So disturbing was this revelation that Kalt, fearing that publicizing the Zone of Death would encourage people to commit crimes in Yellowstone, delayed publication of his paper for a year in the hopes of convincing the government to close the loophole. The solution Kalt suggested was simple: re-designate the overlapping sections of Yellowstone as belonging to the Congressional Districts of Montana and Idaho. However, neither the U.S. Department of Justice, House and Senate Judiciary Committees, nor the U.S. Attorney for Wyoming expressed any interest in doing so, with the latter stating that since the park is under federal jurisdiction, it was not in his power to change the law. Frustrated, Kalt decided to publish his article anyway, writing in the introduction:

“You may have daydreamed about it: some forgotten constitutional provision, combined with an obscure statute, that together make it possible for people in the know to commit crimes with impunity. Whether you were looking for opportunities to commit crimes or afraid that somebody else was, the possibility of a constitutional “perfect crime” was too compelling to ignore…The courts may or may not agree that my loophole exists, and in any case this Essay is not intended to inspire anyone to go out and commit crimes. Crime is bad, after all. But so is violating the Constitution. If the loophole described in this Essay does exist it should be closed, not ignored.”

Unfortunately, the extensive media buzz generated by the article did little to spur government action on the issue, and it was not until the 2007 publication of author C.J. Box’s mystery novel Free Fire – which uses the Zone of Death as a major plot point – that Kalt’s case began to gain some traction. Senator Mike Enzi of Wyoming, a fan of Box’s work, contacted the Department of Justice and asked them  to look into the matter. Bafflingly, the DOJ concluded that no action was needed, arguing that, the Sixth Amendment notwithstanding, trying someone in the wrong state merely amounted to a “harmless error.” Furthermore, as Kalt later wrote in his 2008 follow-up paper Tabloid Constitutionalism: How a Bill Doesn’t Become Law:

“Splitting Yellowstone into the district courts for Wyoming, Idaho, and Montana would also split it between the Ninth and Tenth Circuits. Senator Enzi and others were wary of this because it would create a new and unwelcome burden if environmentalists could use this foothold to challenge the Park Service’s management decisions in the liberal and quirky Ninth Circuit.”

The blatantly partisan nature of this decision aside, Kalt dismissed the DOJ’s logic outright, writing:

“There is nothing to preclude Congress from designating the Tenth Circuit as the proper venue for all administrative appeals concerning Yellowstone National Park.”

Senator Larry Craig and Representative Mike Simpson of Idaho also promised to look into the matter, but came to the same conclusion as the DOJ, with Simpson arguing that the government could rely on “checks and balances” to resolve the issue – a statement which handily reveals that Representative Simpson has no idea what checks and balances actually are. Further hope came in the form of Senator Mike Lee of Utah, with whom Brian Kalt had worked as a lawyer in Washington D.C. However, as Kalt later wrote:

“Not only did he get elected to the Senate on a platform of taking the Constitution seriously, he got assigned to the very subcommittee that would be in charge of fixing this. But he has been otherwise occupied… [Government officials] have lots of more important things to worry about. Of course, they aren’t fixing those things either, but I need to be realistic here.”

More recently, the cause has been taken up by Representative Colin Nash of Idaho, who in 2022 promised he and his colleagues would “do their darnedest” to close the loophole and introduced House Joint Memorial No.3 in the House of Representatives. This bill calls for all of Yellowstone National Park – even the areas located in Idaho and Montana – to be placed under the legal jurisdiction of the state of Wyoming. However, as of the recording of this video no progress has been made in eliminating the Zone of Death.

Meanwhile, the Zone of Death has become something of a cultural phenomenon, inspiring several works of fiction including the 2016 mockumentary Population Zero and episodes of the television series Yellowstone and For the People. There was also widespread speculation that someone might have already exploited the Zone of Death loophole in real life following two high-profile disappearances. The first of these involved 16-year-old Tylee Ryan and her 7-year-old brother Joshua Vallow, who were last seen in the town of Rexburg, Idaho on September 23, 2019. Police stated they obtained video evidence that the two children had entered Yellowstone Park with their mother and never returned. The second case involved 22-year-old Gabby Petito, who disappeared in September 2021 while camping in Grand Teton National Park, which borders Yellowstone just south of the Zone of Death. As it turned out, however, the Zone was likely not a factor in either case. The bodies of Tylee Ryan and Joshua Vallow were discovered buried on the Idaho property of their mother’s second husband, Chad Daybell, while Gabby Petito was discovered in the Wyoming section of Yellowstone, her murder ultimately pinned on her boyfriend Brian Laundrie. But so far as is known, nobody has yet taken advantage of Yellowstone’s legal no-man’s-land to commit the perfect crime.

Yet despite all the media hysteria surrounding the Zone of Death, a recent legal case suggests that the whole issue may very well be a moot point. In December 2005, hunter Michael Belderrain was arrested and charged with poaching after illegally shooting an elk in the Montana section of Yellowstone Park. As was standard practice, Belderrain was indicted in Wyoming’s capital of Cheyenne. During his trial in 2007, however, Belderrain cited Brian Kalt’s article on the Zone of Death, arguing that according to the Constitution, he could only be tried by a jury of residents of the Montana section of Yellowstone. Yet despite Belderrain being technically correct, the judge dismissed his arguments out of hand and pressed on with the trial – a flagrant violation of the defendant’s Article III and Sixth Amendment rights. It was later revealed that the judge was wary of acknowledging the existence of the loophole, as this in turn would have acknowledged the existence of a Zone of Death in Idaho – a zone the Government had done nothing to close. At this point, Belderrain was well within his rights to appeal the decision to the Supreme Court, forcing the government to confront and settle the Zone of Death issue once and for all. Instead, he took a plea deal, agreeing not to appeal the case in exchange for a reduced four-year sentence. Especially disappointed by this outcome was Brian Kalt, who later wrote:

Yet the Belderrain case suggests that contrary to Kalt’s fears, the whole Zone of Death debate may in fact be little more than an obscure legal curiosity. If a serious crime were ever committed in the Zone, in all likelihood the authorities would simply ignore the loophole and try the accused in the District of Wyoming – the Sixth Amendment be damned. But until that day comes – or the loophole is finally closed – we can never really know for sure. So while your chances of falling prey to a legally-savvy serial killer with a penchant for camping are extremely low, perhaps you’d be wise to stay on the Wyoming side of Yellowstone on your next vacation.

The Bill of Rights: a Transcription, National Archives, https://www.archives.gov/founding-docs/bill-of-rights-transcript#toc-amendment-vi