February 2, 2019 Karl Smallwood
Mavos asks: If the queen happened to kill someone can she be prosecuted? 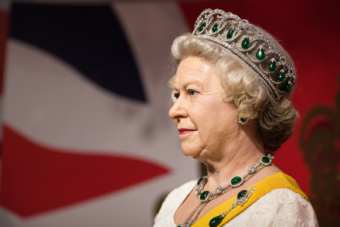 As the current monarch of the United Kingdom, Canada, Australia and a bunch of other countries that have her on their money, the Queen enjoys something known as sovereign immunity. In a nutshell, sovereign, or crown immunity as it is sometimes known, means that the Queen is for all intents and purposes above the law. So does this mean that the Queen could just up and kill somebody if she felt like it, all the while getting off scot free? In theory, yes, absolutely.

It turns out the queen can commit any crime just about anywhere in the world and get away with it legally thanks to the fact that she enjoys both sovereign immunity and diplomatic immunity. As we’ve discussed in our article on whether diplomats can really get away with murder, diplomatic immunity is so exceptionally far reaching in its scope that a person protected by it could indeed go all Lethal Weapon 2 on everyone with total impunity.

The one problem for those diplomats, however, is that their home nations would in all likelihood not take kindly to them doing so and, beyond recalling them, they’d likely face prosecution at home for these acts if they were serious enough crimes. (Although, as we discussed in that piece, minor crimes like flouting any and all traffic rules and racking up many thousands of dollars in parking tickets without bothering to ever pay tends to be seemingly every nations’ diplomats favorite passtime.)

Going back to the queen, however, unlike most with diplomatic immunity, she does not technically have to worry about what anyone in the UK thinks.

You see, part of her immunity stems from the fact that all justice in the United Kingdom and various other countries she rules is meted out in her name. Now, obviously the Queen doesn’t personally dispense justice like the Kings and Queens of yore, among other reasons because doing so would be impractical. As a result of this, whilst the Queen is considered the “fount of justice” for her subjects, the ability to administer it is doled out to judges across Britain- all of whom are granted the post-nominal of QC (standing for Queen’s Counsel) as a nod to their position as an extension of the Queen’s will.

Likewise, the Crown Court similarly dispenses justice in the Queen’s name and as a result, all cases brought before it are tried as The Crown Versus *Blank*. Unsurprisingly from this, it is not technically possible for the Queen herself to be tried before the Crown Court as it would involve her prosecuting, well, herself.

Looking more deeply, her sovereign immunity also makes it so that the Queen cannot be tried in civil proceedings either, meaning she cannot be sued or have other such civil proceedings brought against her. The Queen also cannot be forced to testify in open court or even be interviewed by the police, not that this matters seeing as she also can’t be arrested.

And even if she could be legally arrested for a crime, it wouldn’t matter anyway. You see, technically no arrest can be made “in the monarch’s presence” without her consent. Thus, arresting her is impossible on this count too because it would most definitely have to happen in her presence.

In addition, as if it being impossible to arrest someone just standing near the Queen, let alone the Queen herself, this protection extends to her various palaces too, meaning the police can’t arrest anyone, including the Queen, in any place she currently inhabits unless she gives assent.

It’s perhaps also worth mentioning that all prisoners in the United Kingdom are held “at her Majesty’s leisure” (which is why the Queen can pardon criminals if she so wills it), meaning she could just walk out of prison anyway by telling everyone to let her go.

Speaking of the police, as with the justice system, they too are charged with dispensing justice in the Queen’s name and all members of British law enforcement, upon joining the force, must swear an oath that reads, in part – “I will well and truly serve the Queen in the office of constable.”

Or to put it another way, the Queen is the absolute authority of the entire UK policing system and her word is, quite literally, law. As a result, the Queen could theoretically shut down any attempt made to arrest her by simply telling the officer to go away.

Now you might say if she did all this, surely Parliament would step in and curtail the murderous Queen’s powers to ensure she could be prosecuted.

The problem is that all laws proposed by Parliament require what is known as Royal Assent before they can be enshrined into British law. As the name suggests, Royal Assent comes directly from the Queen herself so a parliament looking to prosecute the Queen would need the Queen to authorise the bill limiting her own powers, which she obviously would not do if she suddenly decided to start treating life like a game of Grand Theft Auto.

Another avenue that could be pursued in regards to prosecuting the Queen would be to force her to abdicate, removing the many protections she enjoys. To be clear though, this wouldn’t necessarily open the Queen up to prosecution as, under British law, nothing she does as Queen can be considered illegal- it’d just mean she could be prosecuted for any further crimes she happened to commit after.

It’s also worth noting here that the Queen has the power to completely dissolve Parliament if she so chooses and cause a whole new set of people to be elected. And if this group displeased her, she is free to do it again and again. It’s also the Queen’s duty to appoint the prime minister and she could, in theory, appoint anyone she wanted to the position, regardless of the way the British public voted in any elections. So installing someone who would do what she wanted would not be any real hurdle.

Thus, it would take a literal revolution for Parliament to rewrite the laws concerning the Queen without her consent.

Yes, like with the police, every member of the Armed Forces in Britain swears an oath of fealty to the Queen and she is considered the ultimate authority in regards to military matters. Thus, if there was an attempt at a Parliamentary revolution and members of Parliament refused to step down as they were rewriting British law without the Queen’s consent, she could simply order the British Armed Forces to forcibly remove them from power or even line them all up and have them executed. The question then would be, in such a scenario, would they honor their oaths to the Queen?

Speaking of her power over the various groups of highly trained armed forces, the Queen has a remarkable number of ways she could theoretically kill someone if she felt so inclined, without need to get her own hands bloody. For example, she could instruct a crack team of SAS commandos to silently make a person disappear, tell her personal guard to charge them with their bayonets, or ask the Red Arrows to crash into someone’s house.

Again, whether the soldier, sailor or airmen in question would honor their oaths and listen to the order is another matter entirely- but the point is, if the Queen ever gave such an order there is no authority on Earth that could legally override it save for herself.

On top of that, if any investigation was every put in place to see why these soldiers had gone on their murder spree, the Queen not only could not be questioned in court, as previously mentioned, but also ignore the matter entirely as, despite her prominent political position, she and everything to do with her private life are exempt from any Freedom of Information requests.

If the Queen felt particularly gung-ho she could even personally declare war on any nation or person and, thanks to her Royal Prerogative, need not consult anyone about it before hand. In fact, she could even authorise a nuclear strike on a person anywhere in the world via Britain’s secretive and expansive network of nuclear submarines, again thanks to the fact that all of the men and women stationed aboard these vessels swear to put the Queen’s orders before all others.

Now you might say a foreign power might get pretty upset if that nuclear strike happened on their soil, and the International Criminal Courts might also try to step in, but if they decided to tangle with this rather formidable woman, the Queen could theoretically make her army larger by commandeering any ships that entered British waters (another power of hers) and by commanding the various armies of the commonwealth (all of whom swear a similar oath of fealty to the crown, same as the British armed forces) to come to her aid- that’s a lot of nations and military might.

Again, how many of these armies would listen, particularly after she decided to go all Armageddon on the world, is irrelevant to the legal discussion at hand- what matters is that the Queen technically has the ability to do all this and that nobody could legally stop her.

Despite the tremendous power she theoretically wields and the fact that she enjoys a “unique legal status” as monarch making her totally and unequivocally above the law, the Queen doesn’t utilise even an iota of her full powers. Why? Well, mainly to keep in the good graces of her subjects with it being noted by the official website of the British Monarchy that , “Although civil and criminal proceedings cannot be taken against the Sovereign as a person under UK law, The Queen is careful to ensure that all her activities in her personal capacity are carried out in strict accordance with the law.”

At the end of the day, she herself swore an oath to her subjects, which she seems to have spent her many decades as Queen taking very seriously. Specifically, in her speech at her 21st birthday, she stated, “I declare before you all that my whole life whether it be long or short shall be devoted to your service and the service of our great imperial family to which we all belong.”