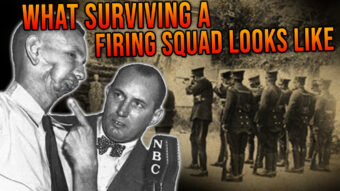 The human body is an odd thing, at incredibly fragile yet at the same time surprisingly resilient. On the one hand, even the most seemingly minor injuries can result in an untimely death. For example, in October 1911, Jack Daniel, founder of the famous Tennessee distillery, entered his office and attempted to open the safe… But the lock proved troublesome, and after trying and failing several times to open the door, Daniel lost his temper and kicked the safe, breaking his toe in the process. Infection soon set in, and Daniel died within days. On the other hand, however, many individuals throughout history have demonstrated the ability to absorb punishment that would kill the average person and still keep breathing. Perhaps the most famous such case was that of early 20th Century Russian mystic Grigori Rasputin, who, according to legend, survived being poisoned, beaten, shot, and dumped in a frozen river before finally shuffling off his mortal coil. But even the Mad Monk has nothing on a humble soldier in the Mexican Revolution, who, in an astronomical stroke of luck, stared down a firing squad and lived to tell the tale. This is the incredible story of Wenceslao Moguel Herrera, AKA El Fusilado.

The Mexican Revolution was not a unified struggle but rather a series of regional uprisings which raged across the country between 1910 and 1920. These uprisings were triggered by widespread dissatisfaction with the three decade-long regime of president Porfirio Diaz, whose corrupt and oligarchical policies favoured wealthy landowners and industrialists over the largely poor and agrarian population. In 1908, Diaz expressed ambivalence over running for a seventh term, prompting liberal landowner Fransisco Madero to announce his candidacy for president. In response, Diaz had Madero arrested and declared himself the winner of a mock election held in 1910. This proved to be a mistake, for upon his release from prison Madero published a manifesto, the Plan de San Luis Potosí, calling for a nation-wide revolt against Diaz’s government on November 20th.

Madero’s manifesto spurred rebel leaders across the country to raise small armies of irregulars and wage a  bloody campaign against local politicians and wealthy landowners. These included such soon-to-be legendary figures as Fransisco “Pancho” Villa in the north and Emiliano Zapata in the south. In the spring of 1911 the rebels succeeded in overthrowing Diaz’s regime and installing Madero as president. But this was far from the end of of Mexico’s troubles. Madero proved disappointing as a leader, refusing to enact the economic reforms the rebels had fought for, such as the return of traditional lands to native Mexicans. Eventually the generals who had fought to install Madero turned against him, and the country erupted once more into bloody civil war. At the same time, the United States grew concerned that the escalating conflict threatened American business interests in the region, prompting U.S. Ambassador to Mexico Henry Lane Wilson to sign a secret pact to install Madero’s Chief of Staff of the Army, Victoriano Huerta, as president. The coup took place on February 22, 1913, with Huerta having Madero arrested and summarily shot.

Huerta proved as corrupt and tyrannical as Diaz had been, and the rebel leaders Villa and Zapata, along with Venustiano Carranza and Álvaro Obregón, formed an alliance in order to depose him. These constitutionalist forces soon gained the support of newly-elected U.S. President Woodrow Wilson, who authorized shipments of arms to the rebels and even sent Marines to occupy the port of Veracruz to prevent Huerta’s forces from being resupplied from abroad. After a series of military victories, in July 1914 the rebels took Mexico City and Huerta fled into exile. On August 20, Carranza declared himself president, an act which did not sit well with the other rebel leaders. The uneasy alliance immediately disintegrated, anarchy and bloodshed reigning as the various rebel factions struggled for power. Finally Carranza agreed to step down and Eulalio Gutiérrez was elected as interim president. This, however, did little to quell the rivalry between the rebel leaders, and while Villa allied himself with Zapata and backed Gutiérrez’s government, Obregón and Carranza formed a rival faction and attempted to drive the Villistas and Zapatistas out of the country. Fighting during this period was especially brutal, with both sides employing scorched-earth tactics and summarily executing any prisoners they captured.

It is during this bloody phase of the Revolution that the story of El Fusilado takes place. In early 1915, 25-year old Wenceslao Moguel Herrera, a native of Yucatan Province, was serving with a group of irregulars under Pancho Villa. Inexperienced and poorly armed, on March 18 Moguel’s unit was easily defeated and captured by federales forces outside the town of Halachó. As was common practice, the commander of the federales, Colonel Ortiz, immediately ordered the Villista troops shot. A firing squad of eight men was assembled and Moguel and his comrades were lined up against the wall of a church, blindfolded, given one last cigarette, and executed with a volley of rifle fire. While most of his comrades died instantly, miraculously Moguel survived the first volley, with the eight bullets managing to miss his vital organs. But his ordeal wasn’t over yet, for Colonel Ortiz then strode up to the pile of crumpled bodies to administer the coup de grâce. Finding Moguel still breathing, Ortiz pressed his revolver against the prisoner’s head and pulled the trigger.

While such a point-blank shot would have killed most people, as you might have guessed, Wenceslao Moguel Herrera was not most people. By another extraordinary stroke of luck, the bullet entered Moguel’s right cheek and exited just under his left eye, missing his brain entirely. Shocked to find himself still alive and realizing that next time he wouldn’t be so lucky, Moguel held his breath and pretended to be dead. Satisfied that all his prisoners had been despatched, Colonel Ortiz and his troops packed up and marched off, leaving the bodies where they lay.

Accounts differ as to what happened next, with some claiming that Moguel was discovered by passing federales forces and given medical attention. Others claim that Moguel, riddled with holes and in excruciating pain, managed to drag himself three blocks to the church of St. James the Apostle, where a parishioner took him in, sewed up his wounds, and nursed him back to health. This latter feat seems particularly unbelievable given the weight of the massive horseshoe Moguel must have had wedged up his backside.

Whatever the case, the ordeal left Moguel alive but badly disfigured. But despite having escaped near-certain death, Moguel was still a wanted man, and remained hidden in the church until well after the Revolution had ended. The civil war had not gone well for the Villistas and Zapatistas. Blaming U.S. president Wilson’s support of Carranza for his failures, in 1916 Pancho Villa launched a campaign of retribution against American settlements, executing 34 American citizens in raids against Santa Isabel and Columbus, New Mexico. In retaliation Wilson to dispatched an American Expeditionary Force under General John J. Pershing into Mexico to hunt down Villa – a mission which ultimately failed. Meanwhile, Carranza seized power in 1916 and enacted policies that confiscated land from wealthy landowners, guaranteed workers rights, and limited the long-held power of the Catholic Church. But Carranza also ruled with an iron fist, maintaining power by executing his opponents – including Emiliano Zapata in 1919. After trying to break up a railroad strike in 1920, Carranza’s supporters turned against him and he was shot while attempting to flee the capital on May 21. Adolfo de la Huerta served as interim president until the election of Álvaro Obregón in November. This is usually considered to be the end of the Mexican Revolution. With his main rival Carranza dead, Pancho Villa negotiated an end to the fighting and entered retirement, using the Mexican and American press to immortalize his image as a revolutionary hero and even appearing as himself in films about his exploits. He was assassinated outside his ranch in Parral on July 20, 1923, likely on the orders of president Obregón.

As for Wenceslao Moguel, word of his extraordinary survival spread throughout Mexico, earning him the incredibly badass nickname of El Fusilado – “the executed one.” But life in post-revolutionary Mexico was hard for Moguel, and in 1930 he emigrated to the United States in search of a better life. While few in the U.S. had heard of Moguel, his pronounced disfigurement attracted attention wherever he went, eventually bringing Moguel to the attention of cartoonist and purveyor of the weird and wonderful, Jack Ripley. On July 16, 1937, Moguel appeared as a guest on Ripley’s radio show, introducing his story to the American public and turning him into a minor celebrity. Moguel toured the United States for several years before finally returning to Mexico and his home in Yucatan Province. Incredibly, Wenceslao Moguel Herrera lived a long and healthy life, passing away on July 29, 1976 at the ripe old age of 86. Rasputin, eat your heart out.

Tapalaga, Andrei, The Man Who Survived an Execution, History of Yesterday, June 8, 2021, https://historyofyesterday.com/the-man-who-survived-an-execution-788d102271d9

Dasgupta, Prateek, The Prisoner of War Who Was Shot Nine Times Yet Survived, Medium, December 16, 2021, https://medium.com/teatime-history/the-prisoner-of-war-who-was-shot-nine-times-yet-survived-f52b64fca8f7