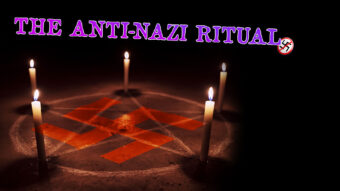 In the summer of 1940, Britain stood balanced on a knife edge. The British Expeditionary Force had narrowly escaped the beaches of Dunkirk, and on July 10 the German Luftwaffe launched a massive air assault, starting what became known as the Battle of Britain. As the bombs fell, the nation braced for the inevitable German invasion. With much of the Army’s weapons and equipment abandoned on the coast of France, anything and everything with the slightest chance of repelling the invader was hastily pressed into service. Old trucks were encased in concrete to form mobile pillboxes, crude mortars, improvised flamethrowers, and even antique bathing machines were used to block major intersections, and men too old or ill to enlist in the regular Forces were organized into Home Guard units armed with hunting rifles, shotguns, molotov cocktails, and – when the rifles ran out – pointed wooden staffs dubbed ‘invasion pikes.’ And in one of the strangest episodes of the entire war, a group of British occultists gathered in the New Forest of Dorset in an attempt to repel the Germans through witchcraft.

This bizarre incident was first described by Gerald Gardner, founder of the modern religion of Wicca, in his 1954 book Witchcraft Today. According to Gardner, the ritual took place on August 1, 1940 near the town of Highcliffe-on-Sea on England’s southern coast. This date fell on the eve of Lammas Day, a pagan harvest festival and one of the Greater Sabbats in modern Wicca. This, along with the location of the ritual – in a clearing near an old gallows-tree known as the Naked Man – was specifically chosen to impart greater power to the spells being cast. The New Forest Coven comprised around 17 members, drawn from various esoteric societies including the Rosicrucian Crotona Fellowship, the Co-Masons, and the Hermetic Order of the Golden Dawn. In place of the traditional bonfire – which would have attracted the attention of Air Raid Wardens or even Luftwaffe aircraft – they used a shuttered lantern or flashlight placed on the eastern edge of the clearing to direct their spells towards Berlin. Stripped naked or “sky clad,” the witches then danced in circles around the clearing, chanting incantations. This ritual, known as the “Raising the Cone of Power,” is intended to gather and concentrate cosmic energy, which could then be focused onto a particular target – in this case, the mind of Adolf Hitler. According to Gardner:

I am not saying that they stopped Hitler. All I say is that I saw a very interesting ceremony performed with the intention of putting a certain idea into his mind … and though all the invasion barges were ready, the fact was that Hitler never even tried to come.”

Indeed, as Gardner states, the planned German invasion of Britain, codenamed Operation Sealion, never took place, though this had far more to do with various strategic realities and tactical blunders than the intervention of witches. Nonetheless, the events of August 1, 1940, often referred to as “Operation Cone of Power,” were part of a long tradition of British occultists using magic in order to repel foreign invaders. According to legend, as the Spanish Armada approached Britain in May 1588, the vice-admiral of the English fleet, Sir Francis Drake, joined a group of ‘sea witches’ on a headland called Devil’s Point near Plymouth to perform a ritual intended to scatter the Spanish ships. 200 years later, another group of British witches gathered on the coast to repel the abortive 1805 invasion by Napoleon Bonaparte.

While no independent sources exist for the 1940 ritual outside of Gardner’s book, the story was widely accepted as true until the 1970s, when it was challenged by one Amado Crowley, who claimed to be the son and spiritual successor of infamous British Occultist Aleister Crowley. Amado claimed that the incident Gardner describes is actually based on a ritual his father performed in Ashdown Forest, Sussex, in May 1941, which involved a detachment of Canadian soldiers dressed in robes and, depending on the source, either a dummy dressed in a nazi uniform seated on a throne or a symbolic aircraft “flown” down a wire stretched between a church and a tree. According to Amado, the purpose of this ritual was to lure Hitler’s deputy, Rudolf Hess, to Britain. On May 10, 1941, Hess took off from Germany in a Bf-110 fighter aircraft and crossed the North Sea to Scotland. After becoming lost and running out of fuel, he bailed out and parachuted to the ground in South Lanarkshire, where he was swiftly captured by the British authorities. Hess claimed he was flying to meet with the 14th Duke of Hamilton, whom he believed to be a prominent leader in the British anti-war movement, in order to negotiate peace with Britain. However, the true reason for Hess’s flight has never been fully revealed, and following his conviction on war crimes charges at the Nuremberg Trials, Hess was given a life sentence in Berlin’s Spandau Prison, where he died – the facility’s only prisoner for 20 years – in 1987.

Amado Crowley further claimed that his father’s ritual was actually part of a larger British Intelligence plot known as Operation Mistletoe, cooked up by none other than Ian Fleming, the creator of James Bond. At the time it was well-known that several members of the Nazi inner circle were fascinated by the occult. A particular devotee was Reichsfuhrer SS Heinrich Himmler, who founded his own pseudo-teutonic cult at Webelsburg Castle and allegedly sponsored various expeditions to recover mystical relics like the Holy Grail. Though Adolf Hitler regarded Himmler’s beliefs as bizarre and nonsensical, he himself was also known to engage in magical thinking. Throughout his political career Hitler had been the victim of numerous failed assassination attempts, and his near-miraculous survival lead him to view himself as an agent of providence, destined to succeed in all his endeavours. Falling somewhere between Hitler and Himmler was Rudolf Hess, whose belief in astrology is known to have influenced his choice of May 10 for his mysterious flight to Scotland. Aleister Crowley believed that these beliefs could be exploited, writing to the Director of Naval Intelligence in 1941 that: “If it is true that Herr Hess is much influenced by astrology and Magick, my services might be of use to the Department in case he should no be willing to do what you wish.”

But while Aleister Crowley’s plan involved directly influencing the Nazi leadership using magic, Ian Fleming’s Operation Mistletoe was far more elaborate. According to author Richard Spence, Fleming and Crowley recruited two SS officers codenamed Kestrel and Sea Eagle and brought them to Ashdown Forest to participate in various occult rituals. The officers then returned to Germany, reporting that the neo-pagan Hermetic Order of the Golden Dawn was alive and well among the British establishment and waiting to seize power once peace had been established. The aim of the ruse was twofold: first, to frighten the superstitious Germans into thinking they were being attacked by British witchcraft; and second, to convince Nazi Party leaders like Hess that a large underground anti-war movement existed in Britain and that peace – and even an alliance against Soviet Russia – could be brokered between Britain and Nazi Germany. This occult angle was supplemented by an elaborate campaign of misinformation aimed at convincing Hess that this fictional movement was lead by the Duke of Hamilton, who was waiting to meet with him at Dungavel House in Scotland. According to this account, the setup worked perfectly, and Hess flew right into Fleming’s trap.

But as compelling as this story is, it is likely no less fictional than any of Fleming’s James Bond adventures. According to historian Ronald Hutton of Bristol University, while Aleister Crowley kept extremely detailed diaries, they make no mention of any wartime rituals or even of Crowley having a son or working for British Intelligence. While Crowley did offer his services to the Naval Intelligence Division in September 1939, two weeks after the declaration of war, this offer was ultimately turned down. Furthermore, no corroborating evidence exists for the existence of Operation Mistletoe or any similar operation, leading most historians to conclude that this was a postwar fabrication. Until the relevant Government documents – if they exist – are declassified, the truth of the matter may never be known.

But whether or not Crowley or other neo-pagans really did carry out witchcraft rituals during the Second World War, Gerald Gardner had good reasons for claiming that they had. According to Ronald Hutton, Gardner’s books were published at a time when neopaganism was widely associated with sexual perversion and Satanism, and stories of neo-pagans ‘doing their bit’ for the war effort would have done much to rehabilitate their image:

“If it didn’t happen, then it was a wonderful way of trying to get people to regard Wiccans as being patriotic and fellow citizens, instead of being some kind of enemies of society. Gerald produced the story of Operation Cone of Power after he’d coped with a great deal of barracking from the media about witches being inherently evil and perverted people. So this was one very good way of explaining that they weren’t.”

If the August 1940 Cone of Power ritual did in fact occur, then it would appear that several members of the New Forest Coven were prepared to make the ultimate sacrifice in defence of their country. The coven was largely composed of members too old to enlist in the regular armed forces or even the Home Guard, and according to Gardner the dancing involved in Raising the Cone of Power was so intense that several participants died of exhaustion soon after. According to another account, one member, having decided beforehand to sacrifice himself, deliberately refused to cover his naked body in protective grease so that he would die of exposure. According to Professor Sabina Magliocco, an anthropologist and folklorist at California State University, Northridge:

And if the idea of witches using magic to fend off a Nazis invasion sounds strangely familiar, it might be because such stories are thought to have inspired author Mary Norton’s children’s books The Magic Bedknob and Bonfires and Broomsticks, which later formed the basis for the classic 1971 Disney film Bedknobs and Broomsticks.

Wigington, Patti, How Britain’s Witches Cast a Spell on Hitler, ThoughtCo, May 25, 2019, https://www.thoughtco.com/british-witches-hitler-spell-4134250

Conde, Alex, London Witches Cast Spells on Hitler to Keep the Nazis Out of England, INSH, May 23, 2017, https://insh.world/history/london-witches-keep-nazis-out/