Has Anyone Ever Actually Stuck a Rodent Up Their Butt?

May 6, 2022 Karl Smallwood
Nick G. asks: Please do one on the myth of people sticking small rodents up their anus. 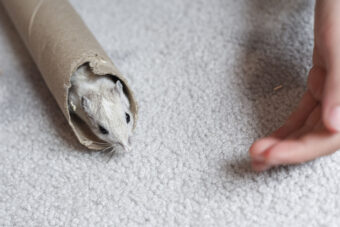 Before we answer that, the practice, as it’s described on websites we’re not going to link because we care about your romantic relationships and don’t want your search history and ad recommendations to get as spicy as ours are now, involves taking a small rodent (usually a gerbil) and unceremoniously shoving the live and wriggling rodent into your butthole. To facilitate the stuffing of the gerbil, various sources suggest that a cardboard tube is sometimes used to “coax” the gerbil into its smelly new home.

Well, to begin with, let’s just say an awful lot of spicy things people do behind closed doors can have the same question fairly leveled at them, and nobody seems too bothered about many of those. But as for this one, the idea behind doing this is that the writhing rodent will stimulate the sensitive butthole area in unpredictable and pleasurable ways. One can only hope their little claws are trimmed first…

Unbelievably it’s additionally claimed that seasoned practitioners of gerbil-stuffing will coat the unfortunate animal with cocaine… because why not we guess?… While oft described as a practice popular with especially adventurous gay men, rumors abound about gerbil-stuffing being popular with all kinds of people who have buttholes.

For the sake of accuracy we should note that our description is the PG version of how gerbil-stuffing is said to work… so, because we hate ourselves, here’s a needlessly graphic uncensored description courtesy of sex columnist Dan Savage and, well, let’s just say it’s not for the feint of heart… unless you’re into that sort of thing… We here at TodayIFoundOut don’t judge… Actually, if we’re being honest… in this case we’re going to judge a little because Mother of God, that poor gerbil… What’s wrong with you people?!?!:

What the what?!?!? You say? We are glad you asked because it’s a fascinating case of life… uh… finding a way.

The girl, whose name is not given in the case report, arrived at a local hospital with all the signs of a woman in labor. Upon examination, doctors found no vagina, only a shallow skin dimple. With no birth canal, the baby’s only option of escape was Caesarian section. Doctors subsequently delivered a baby boy via C-section (weighing in at 2.8 kg / 6.17 lbs), and then set out to solve the mystery of his conception.

While performing surgery to repair the stab wounds, doctor’s found two holes that opened the girl’s stomach to her abdominal cavity. They also noted that the girl arrived at the hospital with an empty stomach, resulting in the absence of large amounts of stomach acid or any other food matter.  Thus, it is thought, in the most unlikely of circumstances, that the sperm in the girl’s stomach gained access to the girl’s reproductive organs through her injured gastrointestinal tract.

But we digress… Going back to gerbils up your butt, in our own research we stumbled across an entry in a medical textbook about the practice; however, the doctor writing about it openly referred to it as an urban myth and included his own email address in the book so that anyone who had proof of it ever occurring could let him know. And as anyone knows, stating something wrong anywhere for public consumption, let alone challenging the public to prove you wrong, is a surefire way to be proven wrong if any such proof exists. To date, it does not appear anyone has been able to show the good doctor he was incorrect.

So where did the whole idea come from then? Well, nobody is quite sure, though the first known references appear to be from the early 1980s, though the lack of any kind of paper trail as it were makes this hard to know for sure.

Specifically the myth is said to have begun shortly after the release of Pretty Woman in 1982. At this point, rumors began circulating that actor Richard Gere had to have a live gerbil removed from his anus. Exactly who started this rumor isn’t known (with some claiming it was started by Sylvester Stallone after the pair had a falling out). However, this being the days before the world wide web, funny enough, it appears the myth was initially spread via fax.

Gere isn’t the only person to have such a rumor spread about him and throughout the 1980s numerous celebrities were rumored to have engaged in the practice of “gerbilling”. Oddly, the main victims of this damaging rumor, besides maybe the gerbils, appear to have been newscasters, several of whom were accused of killing or otherwise maiming gerbils in this manner in the early 80s. As for Gere, he’s reportedly indifferent to the whole thing, coolly noting simply that, “It’s kid stuff.”

The idea of gerbil-stuffing once again entered the public consciousness in the 1990s with the rise of the internet and later popular South Park parodies stoking the flames, all allowing people to spread unverified rumors with renewed zeal. This once again saw the aforementioned Gere story being spread far and wide, exposing a new generation to the “knowledge” that it was common practice for gay men to put gerbils in their happy factories.

As is wont to happen with rumors, internet users added their own embellishments to the myth. One of our favourites being that men hoping to avoid the draft during the Vietnam war would sometimes put a gerbil tail in their butt…

Well according to the internet, the idea of gerbil-stuffing being practiced by gay men was apparently so widespread back then that seeing a gerbil’s tail hanging daintily from your butt would be enough to subtly indicate you were gay to whoever was conducting your medical. Of course, one would think the easier way to do this would be to simply say you were gay, but that’s less fun we guess…

For the curious, there is absolutely no truth to this whole draft angle whatsoever, but it’s amusing nonetheless.

Since the 90s the rumor has continued to spread across the internet in spite of a complete and total lack of evidence from any reasonably trustworthy source or sufficiently rattled gerbil. Although, we suppose with their lower jaw removed, it would be difficult for the gerbils to speak up about it, even if they managed to escape their tubular coffin…

Richard Gere and the Gerbil

Is is true what they say about gerbils?

Has anybody ever stuffed a gerbil up his ass?

A complete history of gerbilling