How Do They Teach the American Revolution in Great Britain? 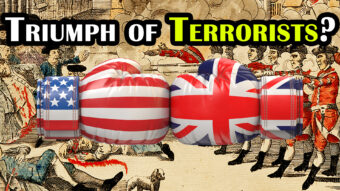 The American Revolution is one of the historical events that together with things like the French Revolution, among other things, helped usher in the modern era. Americans, on the whole, tend to be proud of this event and focus on it heavily in their school curriculum, as it heralds the birth of their nation and the triumph of a handful of terrorists against their government and fellow countrymen.

But what do schools in Britain have to say about the American Revolution?

To begin with, on the surface, if one talks to people on the street or reads a British book on the subject, Americans will perhaps be positively surprised to see that today, there are no hard feelings in England regarding the Americans’ choice to leave the glorious British Empire, may it reign forever.

It seems like a peachy divorce with no grudges held or hostile views taken. After all, for the last century at least, the UK has been the closest ally of the US in Europe, with mutual support in all major conflicts of the 20th century, and both follow similar policies so consistently that the UK has been on occasion ironically referred to as the 52nd state.

But there is a catch. While the American Revolution is a cornerstone of American history… in Britain… Well, it seems that the subject of the “American War of Independence,” as it is known in the UK, is rarely mentioned in British education books of past and present or, at least, not in great detail.

That’s not to say it’s not mentioned anywhere, simply that while they may learn a little about early American history, including the War of Independence, it’s more of a footnote in British history. It’s probably also worth mentioning that when it is mentioned, it is never seen from a nationalistic point of view. They do not, say, shake their fists angrily at pictures of Thomas Jefferson and Benjamin Franklin. Rather, it’s covered frankly and then they move swiftly on to more interesting and relevant subjects to British history.

For example, the focus in history is much more centered around things like Roman times – for example the legendary resistance of Queen Boudica against the might of Rome – or on later periods, such as the 100 Years War and the intrigues of the Tudors, generally trying… to keep track of the beheadings in the Tower of London. In more modern times, emphasis is put on issues such as industrialization, colonialism and the post-colonization era, the events during the World Wars, and internal reforms.

As to the aggression of the British Empire, while many certainly complain it’s not fully represented, it is far from omitted. British imperialism, for example in Africa, is of course addressed. So why not focus on the American War of Independence and the birth of one of the most influential nations in modern history?

It seems that the lack of details when teaching about American independence is not due to shame, envy or part of a continuous effort to hide their colonial past, as say, the case might be in Japan.  Rather, the main reason is the unspectacular trivial fact that the American Revolution is seen as a minor detail in comparison to other events directly related to Britain’s history. The U.S. breaking off simply was just one of many nations that did that for various reasons.

Indeed, if one looks at the larger scope, more than 60 countries celebrate independence from the British Empire, which in its heyday had control over one fifth of the globe’s population. That would amount to on average one independence day celebration of a country every week in a given school year. A phlegmatic English answer regarding this issue would be that they have better things to do than to focus on each one of these separately. So the American Revolution is equated with other similar events, and it is rather addressed as an armed uprising of an important, but distant rural populace against taxes. Hardly unique in history.

The importance of ideas such as enlightenment, freedom and democratic values, are viewed by Americans on the basis of their revolution as one prime example thereof. But the schools in the UK, similar to most European countries, focus on other incidents. Some of them are closer to home and widely acknowledged as shaping history, such as the French Revolution. Another example is the post-colonialism era in Asia and Africa as one of the main facets of world history. These, rather than American Independence, are considered to provide the historical depth necessary for such discussions in UK classrooms.

Thus, the War of American Independence will mostly come up as an addendum, providing context when dealing with the French Revolution or with trade regulations within the British Empire, as an example of a taxation policy gone wrong. It can also be related to the long term effects of the Seven Years War, which may be considered one of the causes that would eventually lead to the higher taxation that in turn ignited the revolutionary actions in the Americas.

Of course that does not mean that American history is shunned from British schools. Far from it. The developments of the civic rights, the role of American industrialisation and the combined efforts with the British in the World Wars and the Cold War are placed highly in various stages of the curriculum, be it in the early Key Stages of the English system or adapted for older students of 15 to 18 years, such as during the A-Level and GCSE exams.

To give an example, within the history books provided by the AQA (on their website), out of more than 30 titles covering the period from the Crusades up to the 21st century, two refer directly to the USA: “The Making of a Superpower: USA, 1865-1975” and “The American Dream: Reality and Illusion 1945-1980”. The titles are indicative of the thematics stressed in each book. Notice that there is no book specifically dealing with the USA before 1865[1].

Beside these reasons, the lack of emphasis on the American Revolution could be seen as related to the political scene within the UK itself. The UK is regarded by some as a fragile union, as emphasized by much talk of independence by individual regions, especially in the last decade. The independence of a mainly English-speaking American colony, which is also culturally related to England, is much more on par with the Scottish or North-Irish independence movements than, say, the Indian independence of 1947.

But to sum up, in general, the American Revolution is not negatively portrayed in British schools as some might first assume. Rather it is seen as one of many world history events which are linked to the understanding and teaching of UK history, without being particularly vital to it and, thus, not really worth covering in depth.

Ever wonder what the difference between the UK, England, and Great Britain is? Well, wonder no more:

The confusion of the terms seems to revolve around the term “country” and the political powers that are perceived based on that word. While the four countries that make up the UK are generally considered separate in the minds of locals, and in certain sporting events, their powers for local law and control are devolved from the UK. Think of the 50 states of the United States, while each state has their own set of laws, they all are still under the power of the federal government. In the case of the UK, it is somewhat similar, though certain responsibilities are also implied, like healthcare and education, that are delegated to three of the four countries. The responsibilities that are delegated differ from one country to the next. England is the only country in which the UK does not devolve any powers and instead it is legislated directly by the UK government. When it comes to international politics, it is the sovereign nation of the UK that is recognized and not any of the four constituent countries.

The term “Great Britain” refers to the land mass that comprises England, Scotland, and Wales. Something that aids in the confusion as to the difference between Great Britain and the UK is that the term is sometimes internationally used as a synonym for the UK.  For instance, the UK’s Olympic team competes under the name “Great Britain” and the ISO (International Organization for Standardization) gives the UK the country codes of GB and GBR. This can be confusing given that the ISO also codes England, Scotland, and Wales as subdivision countries of the UK but Northern Ireland as a subdivision province. If you’re getting the impression that Northern Ireland is the red-headed stepchild of the UK, you may be right! (both figuratively and literally, if you believe the current statistics for redheaded populations)

The confusion over the definition of these four countries, in reference to the UK, is further muddied up in sporting competitions. There are several international sporting events, like the commonwealth games, and football competitions, in which each of the four has their own team, and do not compete under a unified national team. When competing under these conditions, their nations are referred to as “home nations”. Because each team is from a specific home country, it can lead some to think these countries have political autonomy as well.

Scotland and the American Revolution

Using “Hamilton: The Musical” in the Classroom