How Do German Schools Teach About WWII? 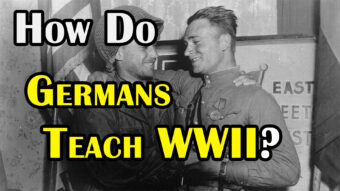 After World War II, the German state was utterly destroyed. It was split in four parts, and to top it all, coming face to face with the scale of the atrocities their government and armies committed through public events like the Nürnberg trials. This in combination with the process of de-nazification, which can be seen as a large-scale rehabilitation program, and the regaining of independence, albeit as two states, helped the German people in the 50s to begin looking towards the future, burying the past.

It was not just a lost war, which people can accept while still feeling proud about their deeds during it, as perhaps the French used to view Napoleon’s efforts which ended in defeat, or Austria’s defeats in the Seven Year War. Rather, in this case, the sensation after the war seems to have been similar to a person regaining their senses after having committed acts of violence under the influence akin to a crowd cheering for a football team or other such instances of mob mentality which all humans are susceptible.

Naturally given all the revelations after the war and the atrocities committed, the Germans, collectively, wanted nothing more than to forget, and focus on new goals, first the economy, which led to the German economic miracle, and then on the foundation of the European union, of which in the coming decades it would arguably become the leading country.

But what about the history books in school? After all, typical after any conflict, whether a given side is the winner or loser, the history taught in schools tends to be colored to favor ones’ own people. This, however, could not happen in Germany. The reasons for this were varied, from making sure something like that couldn’t happen again and, of course, the scale of the atrocities on a global level and the small time gap that separates us from those events and how well documented those events are.

This brings us to the broad strokes of how this particular conflict was and is taught in German schools. We should point out here that in Germany, the education system is regulated not by the federal government but independently in each of the 16 states that constitute the German federal republic (or BRD). So the way history is taught, although generally falling within the same lines, can vary a lot from region to region. For example, the choice of literature used in the various classes differs greatly not only from year to year but also from federal state to federal state.

That caveat out of the way, the study of the war period and how this is viewed in German schools can be generally divided into four parts:

First, the Weimar Republic: The Weimar Republic, at least its beginnings, are generally viewed positively. It is seen as a first decent effort towards democratization, despite the problems that it faced in the aftermath of World War I. The various problems, culminating in the economic crisis of the late 20s and the subsequent rise of the Nazi regime, are dealt with in detail, emphasizing the mistakes that would lead to the fall of the democratic system. One would say that the Weimar Republic, despite the brevity of its existence, is viewed with a certain nostalgic sentiment, accompanied by the looming threat of what was to come. And that is not just the war but the Nazis themselves and their ideology.

Second, Nazi ideology and atrocities: Head-on, the students are confronted with the crushing effects of totalitarian regimes, racial ideologies and where these can lead. In addition to photo and video documentaries, most schools organize mandatory school trips to holocaust memorials, usually former concentration camps. This does not only apply to history class. Students are also introduced to works of literature tackling the issue of Nazism and ethnic hate in Europe of the time. This can include but is not limited to authors such as Berthold Brecht and Thomas Mann. Additionally, Jewish voices are amplified in terms of Jewish poetry, reports from survivors, and historical documentaries focusing on the long-term consequences of hate and violence. Some of the literature choices indicate that the schools try to emphasize the aspects of humanity and also the problem of group mentality and prejudice, as seen in works such as the post war play “Andorra” by Max Frisch, and more recent works such as “The Boy in the Striped Pyjamas” (from 2006 by John Boyne) and “The Reader” by Bernhard Schlink, but also the diaries of Anne Frank. Excerpts of pro-Nazi texts are studied also, once the students are deemed mature enough to handle this. In this vein, experts from “Mein Kampf” are tackled in advanced history class, stressing the contradictions within the text, what contemporary citizens might have identified with, and the lack of morality therein. Interestingly, as if to complement Nazi ideology with a similar type of prejudice, the other major topic focused on intensely is that of slavery, racism, and segregation in America.

Third, the war itself: Remarkably, the details of the fields of war are often underplayed in German schools. A possible reason for this is that showing maps of expanding German territory during the first two years of the war and discussing their winning battles might cause encouragement of nationalistic pride, which seems counterproductive to many given the points that educators are trying to teach.

Furthermore, the discussion of the details of each battle that Rommel won or lost in Africa or the supply problems on the eastern front are not vital to the analysis of the atrocities of the Nazi regime. Another, more practical aspect, is that already much time has been allocated to the subject of war anyway, so they cut down on the actual battles.

Of course, one downside of deemphasizing this is many German students are never really made aware of many specific military events and conquests. Since most emphasis in school is put on the internal developments, theoretical or philosophical aspects, and of course on the ideology and practice of ethnic cleansing and the ruthlessness to other groups of people seen as ethnic, cultural or political outcasts, such as Jews, homosexuals, communists etc., the result is that the military developments of war are understated as alluded to. The result is, shockingly, that many German students are actually surprised to learn things like that Germans invaded places like (modern) Ukraine, (modern) Serbia, and Greece.

In contrast to these broader war strokes, resistance against the Nazi regime within Germany is heralded as an example of heroism and bravery; one such example being the siblings Sophie and Hans Scholl, members of the resistance group “The White Rose”. Such examples allow German students to find figures from the war time with whom they can identify with.

On this note, not every regular German who lived in the 1930s and 40s is painted as a terrible person, after all when dealing with such a large group, as in any populace, there are plenty of good people and a percentage of bad. That said, given all that happened, a large emphasis is put on even most of the good people being complicit in the atrocities by looking away and not doing anything to stop it.

Fourth, Defeat and post war: The major destruction in Germany and the high cost of human lives during the war is not attributed to the allies, but rather to the Nazi regime itself, which is being viewed as the perpetrator in starting an unnecessary war in the first place. Furthermore, most of the destruction on German soil was inflicted in the last year of the war. The obstinacy of not surrendering, even as it was clear that the outcome of war would be negative, is seen as proof of the minimal care the Nazis expressed towards their own people. The suicide of members of the Party, such as Himmler and Hitler himself, is seen as an act of cowardice on their part.

Thus, rather unique in history, the opposing forces who were victorious are not generally seen in a negative light by those they defeated. Far from it.

On that note, the occupation of the German cities by the allied army is characterized as “liberation” (“Befreiung”), despite, of course, that the allied soldiers at the time didn’t seemingly view the race to Berlin as a race to “free” Berlin. This choice of words, however, comes with the emphasis that by losing the war, the German people were freed from Nazism.

An interesting example comes from alternative history broadcasts that contemplate a world after supposed Germany victory. These paint a horrific dystopia in which the Germans as well as the occupied people would be suppressed by a ruthless Nazi regime. The 8th of May is therefore known as Day of Liberation (Tag der Befreiung).

Making parallels to the way the European Renaissance supposedly liberated the medieval people, the “liberation”, as well as the de-nazification process lead to an internal katharsis among Germans concerning Nazism.

Reflecting all of this in popular German cinema, German war films, especially in the last few decades, tend to deal with the subject with honesty, showing the gradual shift to madness caused by hollow mass delusions, often in a tone more fatalistic than heroic. Therefore, they can be much deeper than a typical war movie, and if you are up for that, you might enjoy works such as the “Generation War” miniseries (“Unsere Mütter, unsere Väter”) or the movie “The Fall” (“Der Untergang”), perhaps mostly known thanks to the most memefied Hitler scene ever…

Of course, one major issue of all of this in the way it’s taught in schools and extreme emphasis placed on this period of history, is the subject of imposed collective responsibility on modern Germans, even if just implied or felt, rather than ever explicitly stated.

On first glance, it is good to study these events in great detail to make sure they don’t happen again. However, an issue for Germans, of course, is the sense of collective responsibility, despite no student today or their parents or even potentially grandparents having anything to do with any of that.

How much weight does the idea of original sin have? How is a person born in the 2000s responsible for the Nazi atrocities? It is still heavily frowned upon to display the modern-day German flag – despite officially and explicitly not being a Nazi symbol – in most contexts other than international football matches. On a similar note, a nationalistic display such as pledging allegiance to the flag during class every morning would have the worst possible connotations in Germany, despite being common in places like the United States.

Furthermore, there is a high percentage of population with immigrant heritage (just look at the German national football team). As you might expect from all this, there is some concern that the German school systems may go too far with the seeming obsession with the Nazis and all the mistakes that were made, instead of spending more time on broader history as is more typical in many other nations.

Whatever one’s opinion on that, as an interestingly little side-note, the German de-Nazification process was considered such a success that decades later Americans sought to apply a same methodology after occupying Iraq. Unsurprisingly, this was not exactly successful.