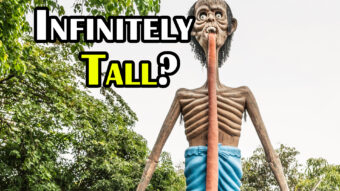 Childhood development is largely defined by vertical growth. For generations, parents have kept a story pole or even marked a door jamb with their kid’s height every birthday, or perhaps even several times per year. Whatever your height may be, and whatever height you’d like to be, one thing is certain: we can lose weight, we can dye our hair, and we can have drastic cosmetic surgery, but as adults most all of us are powerless to grow any taller. To understand how tall each of us ultimately becomes and why we stop growing, we must first understand the biology of how we grow.

We humans start out as one tiny cell. Sperm meets egg, and we become a zygote. The zygote then forms new cells at a fever pitch. One cell becomes two, two become four, then eight, sixteen, thirty-two, and on into the billions and even trillions of cells as we transition from an embryo to a fetus. But the newborn is ultimately not a giant mass of similar cells. Along the way we develop complex, specialized tissues, organs, and organ systems. Among these are your bones, and your greater skeletal system.

As the embryo forms organ systems in its later stages, the template of a skeleton is laid down. Yet it does not form solid bones at the outset. Instead, it forms a template for the skeleton made out of cartilage. Cells known as osteoblasts then migrate to these areas and perform a process known as ossification, or the laying down of calcified bone in place of the cartilage. After nine months the fetus is ready for its close up, and birth arrives.

Growth of flat or “intramembranous” bones in the body, such as the bones in the skull, ossify in their own special way. Their contribution to height is of minimal consequence.  And as we become larger human beings as we age, our long bones will grow in thickness to support the additional weight. As this happens, the insides of bones will actually be torn down in a process known as resorption, by cells known as osteoclasts. At the same time, new bone tissue is added to the exterior of the bone. Think of it as bricks being removed on the inside while being laid down on the outside. This is literally called bone remodeling. If this were to not happen, our bones would be dreadfully thick and heavy, making movement much more difficult. Referring to a friend as “big boned” would be accurate in that case.

To achieve significant growth in height to get us spiking a volleyball, the long bones must grow in length. These include the humerus in the arm, the radius and ulna in the forearm, the femur in the upper leg, and the tibia and fibula in the lower leg. To achieve this growth, we need our old friend cartilage to start the process. The ends of long bones have a cartilage disc known as an epiphyseal disc, or more simply, a growth plate.

The grown plate is made of a type of cartilage that migrates towards the shaft of the bone at is multiplies. This cartilage then becomes ossified by our old friends the osteoblasts, and in turn, the bone has grown longitudinally. Thus, the growth plate is essentially a factory to make the bones longer. It gets its marching orders from the pituitary gland. The pituitary gland is also known as the master gland, because it produces hormones that tell so much of the body what to do and not do. In this case, the main pituitary hormone acting in bone growth is called, big surprise, growth hormone, or GH for short.

As long as GH is being produced, the growth plates will continue to produce new bone and the person will grow taller. This is especially in play during puberty, when the pituitary is pumping out GH at breakneck pace. But there becomes a tipping point as puberty rambles on. As we advance through that years-long process, we don’t look like giant children – though many of us continue to act like it. No, we also mature physically. This is called the “complete growth effect.” Other pituitary hormones, thyroid hormones, pancreatic hormones, and so forth, act in concert to make us not only taller, but physically mature.

Here is where trade-offs begin to occur. Levels of sex hormones also begin to increase as puberty continues. Two among these, estrogen and testosterone, cause the growth plates in our bones to ossify and fuse. Estrogen has a strong effect on growth plate fusion, resulting in women being generally shorter than men. When the growth plates are fused, which can be seen plainly on an X-ray, it’s game over for growing taller. Our cartilage-to-bone factory has been mothballed, and we stop gaining height. This usually occurs in the late teens, but can stretch until the mid-20s depending on the individual.  So, the sex hormones that were maturing and waking up our happy tissues, have now locked in our height.

However, issues with the growth plates can arise along the way. As we’ve discussed, the amount of GH plays a pivotal role in the growth of long bones. Under normal circumstances, the amount of GH produced stays within normal ranges throughout our youth, and tapers off as we reach adulthood. But we can produce too much of it, known as hyper-secretion, before the growth plates fuse. The body can grow literally too fast, with maturation lagging behind. This is called gigantism. If too little GH is produced, or hypo-secreted, the individual will remain short, which can lead to the condition known as dwarfism.

Too much GH can be produced after the growth plates fuse. In this situation, other cartilage in the body will respond to the excess GH and grow abnormally. This leads to distorted facial features with longer hands and feet, and is known as acromegaly. Young athletes using anabolic steroids to gain muscle and enhance performance can induce premature fusion of the growth plates and permanently stunt growth. Youngsters who break the end of a long bone can damage the growth plate. In these cases, the bone must be set with extra care to avoid problems with future bone growth. If the damage is extensive and the bone not set perfectly, that arm or leg can end up being shorter than the other.

And some parents, concerned about their child’s lack of growth, often ask a physician to prescribe GH. Under a doctor’s supervision, the hormone can be effective for the child. But while some additional gain in height may occur, it is rarely a panacea, and side effects can mitigate the growth benefits. Without the other hormones involved in the complete growth effect present in proportionally higher amounts, or even if they are actually present in proportionally higher amounts, maturation of other tissues and organs can be negatively affected. These complications can start a cascade of other health and psychological problems for the child.

Though cases are rare, GH deficiency in adults is possible, and a doctor might prescribe it. In recent years, GH has been rumored to have anti-aging effects. Many aging men are taking GH in hopes of adding years to their lives and muscle to their bodies. Instead of sitting in a pool with giant Cocoons and the likes of Don Ameche and Jessica Tandy, these men think they can reverse the aging process by what’s in the syringe. GH is a controlled substance, but can be obtained on the black market. While some studies have shown that lean muscle mass can be increased in adults who take GH, side effects such as carpal tunnel syndrome, fluid retention, joint pain and breast enlargement have been observed.

Hormone therapy aside, genetics play a huge role in determining out height. And it’s not a simple equation. One might think that there’s one gene on one chromosome that determines if we end up 4’10” or 6’10” tall. This is hardly the case. The scientific literature now shows that there are dozens of genes that play a role in how tall we become, known as a polygenic trait, and nearly 700 variations in those genes, known as alleles. Which of these genes and what variations an individual receives from his or her parents will have an additive effect on height. This results in the characteristic bell curve for average height in the human population, with most being between about 65 and 71 inches tall.

Nonetheless, average height can vary widely from country to country and even within sub-populations of countries. The Netherlands usually checks in as the country with the tallest population on average. Some Scandinavian and Slavic countries are also on the tall side. Indonesia and several countries in southeast Asia and western South America have relatively short populations. Some African countries have regional populations that are well above average height, and have been mobbed by college basketball recruiters for decades.

It should be noted that good nutrition and solid overall health throughout our childhood can also play some environmental role in how tall we become.  Ultimately, though, like so many aspects of the human experience, we are at the mercy of heredity. Simply stated, if one or both of your parents are taller than most, all else being approximately equal, you’re likely to be taller than most. Our only physical guarantee as adults is growing outward if we don’t control our habits, rather than any guarantee of growing upward. So, for now, if you want to add a few inches to your height, you’ll have to buy taller shoes.