Who Invented Shock Therapy, and How Does It Work? 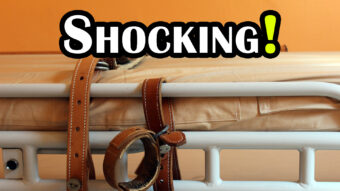 It is the stuff of nightmares and horror movies. A patient is dragged kicking and screaming by hospital orderlies and pinned to a gurney. A bite block is forced into their mouth, and a pair of electrodes placed on their head. Then, at the flick of a switch, hundreds of volts of electricity are passed through the patient’s head. This is the popular image of shock therapy, a treatment which, along with the lobotomy, has become synonymous with the historic abuses and excesses of the psychiatric profession, this reputation cemented by horrific depictions in countless books, movies, and TV shows.

Yet despite this stigma, shock therapy – more properly known as electroconvulsive therapy or ECT – remains an accepted psychiatric treatment to this day, and has proven highly effective in cases of severe depression and bipolar disorder which have not responded to other treatments. But how was ECT invented in the first place, and how does it actually work?

While electricity has been used in medicine almost from the moment of its discovery and various versions of shock therapy have been used to treat all manner of things in the interim, the treatment that would eventually lead to the more legitimate and modern ECT actually had nothing to do electricity at all. In 1934, Hungarian psychiatrist Ladislas Meduna, working at the Psychiatric Institute in Budapest, observed that patients suffering from Schizophrenia rarely seemed to suffer from epilepsy – and vice-versa. Meduna began to wonder if the two disorders were in some way antagonistic, and therefore whether inducing epilepsy-like seizures in his patients might cure them of their Schizophrenia. After trying a variety of substances, Meduna settled on Camphor dissolved in oil, which produced violent seizures within an hour of being injected. Early results were encouraging, with around a third of his patients showing remarkable improvement after even a single round of induced convulsions.

In 1927, while experimenting with the newly-isolated hormone Insulin, Sakel accidentally overdosed one of his patients, sending him into a coma. When the patient recovered, he displayed remarkably improved mental clarity, leading Sakel to develop Insulin Coma Therapy as a treatment for Schizophrenia. In this treatment, patients were injected with a massive dose of Insulin, inducing a deep coma. They would be left comatose for up to an hour before being revived with glucose administered either intravenously or through a tube inserted through the nose. This process would be then repeated up to six days per week for up to four months, though procedures varied widely from hospital to hospital. Following the publication of Sakel’s research in 1933, Insulin Coma Therapy was rapidly adopted worldwide, and by the early 1950s nearly every major psychiatric hospital in the Western world had a ward devoted to the treatment.

But while Insulin Shock Therapy boasted a success rate of 80%, it was a time and labour-intensive treatment, requiring a dedicated unit of doctors and nurses to administer. It was also dangerous, wreaking havoc on patients’ metabolisms. Some patients never awoke from their comas, while many suffered fainting spells, sweating, restlessness, and rapid weight gain due to wildly fluctuating blood sugar levels. Consequently, many hospitals turned to an alternative technique developed by Ladislas Meduna, using the drug Metrazol. Unlike his original camphor preparation, Metrazol acted nearly instantaneously and induced seizures for only a few minutes. Thus, unlike Insulin Coma Therapy, a round of Metrazol therapy could be performed by a single doctor with a handful of nurses or orderlies to hold the patient still. By the 1940s Metrazol therapy had all but replaced Insulin in British psychiatric hospitals.

While an improvement on insulin, however, Metrazol was hardly a perfect drug. Patients reported that in the few seconds between administration and the onset of seizures, the drug induced a powerful sense of dread, as if the patient were about to die. Many found the feeling so terrifying that they violently resisted follow-up sessions. Doctors soon realized that a more convenient means of inducing seizures was needed.

The solution would come from a rather unexpected source. As the story goes, one day in 1938, Italian neurologist Ugo Cerletti was returning home from work when he stopped in at a butcher shop. When the shop did not have the cut of meat he wanted, he was lead to the slaughterhouse out back so a pig could be butchered for him. As Cerletti watched, the butcher applied a pair of electrodes to the pig’s head to stun it prior to slitting its throat. Seeing the violent convulsions this procedure induced, Cerletti began to wonder if electric shock could be used to induce seizures in human patients. In April of that year, Cerletti and colleague Lucio Bini applied the new technique of electroconvulsive therapy to a schizophrenic patient for the first time, with promising results. Being far easier to administer than insulin or metrazol and less frightening to patients as it acted instantaneously, ECT quickly won over the psychiatric community and by the 1960s had all but replaced all older methods. Its use also expanded to the treatment of dozens of disorders, including catatonia, obsessive-compulsive disorder, depression, mania, and bipolar disorder.

But like many seemingly revolutionary treatments in the history of psychiatry, ECT soon came to be overused and abused, with many hospitals employing it as a method of keeping unruly patients under control. Among the most infamous misuses of ECT was by Scottish psychiatrist Dr. Ewen Cameron, who, while working at Montreal’s Allan Memorial Hospital in the early 1950s, developed a treatment known as “psychic driving.” This technique involved breaking down or “depatterning” a patient’s personality, then building it back up again along healthier, more socially-acceptable lines. This was accomplished by subjecting them to intensive sessions of ECT, a common side effect of which is long-term memory loss. This was then followed by long periods of induced sleep during which the patients were fitted with headphones playing repetitive messages intended to reprogram their minds and personalities. While Cameron’s research was initially clinical in nature, it soon came to the attention of the CIA, who began secretly funding him as part of Project MKULTRA efforts to develop mind control and brainwashing techniques. Between 1957 and 1954, Cameron experimented on hundreds of unsuspecting patients, many of whom suffered such severe memory loss that they were essentially reduced to an infantile state and had to re-learn basic life skills and even their identities from scratch. That said, to this day Allan Memorial continues to deny its involvement with the CIA, and all official records pertaining to Cameron’s experiments have disappeared.

By the 1970s, however, it became apparent that for the vast majority of psychiatric disorders, ECT was of marginal utility as a treatment. Indeed, as early as 1953, an article in The Lancet titled The Insulin Myth revealed that the very concept of shock therapy was fundamentally flawed, its purported effectiveness based on faulty statistics. In most cases, only patients with good prognoses were selected for Insulin Therapy, and throughout their treatment were kept together as a group and given special treatment and privileges. The supposedly high success rate of insulin shock was therefore largely a product of selection bias, as most of these patients would likely have improved without treatment.  An even more damning refutation of the practice came in 1957, when a study in which half the subjects were given insulin and half a more conventional sedative found no significant difference in outcome between the two groups.

The 1970s also saw the emergence of a wider anti-psychiatric movement. The development of antipsychotic drugs such as Thorazine lead to many old-style asylums being emptied, and traditional institutional care being increasingly replaced by more community-based treatment approaches. Graphic media depictions of psychiatric hospitals such as in the 1975 film One Flew Over the Cuckoo’s Nest further helped to stir anti-psychiatric sentiment, leading to the use of ECT and other traditional treatments being severely curtailed.

Yet as mentioned before, ECT continues to see limited use to this day, being extremely effective in the treatment of severe depression, mania, and catatonia which has resisted all other treatment. However, the days of wide-awake patients, bite blocks, and high amperages are a thing of the past. Today, patients undergoing ECT are sedated and given a muscle relaxant to prevent them convulsing, while the electrodes are typically placed unilaterally – one one side of the head –  rather than bilaterally in order to reduce memory loss. Finally, the shock is delivered in the form of brief pulses rather than the continuous sinusoidal current of older machines. Aside from the previously mentioned retrograde amnesia – which usually clears up within a few days or weeks –  the procedure produces few serious side effects.

But how does ECT actually work? Surprisingly, though the technique has been in use for over 80 years, the answer is: nobody knows. While researchers have variously theorized that ECT stimulates the release of certain neurotransmitters, increases the permeability of the blood-brain barrier, stimulates the immune system, or even alters gene expression, despite decades of research no study has yet been able to pinpoint its precise mechanism of action, with modern improvements in treatment techniques being largely the result of clinical trial and error. But this is nothing new in medicine. Many drugs have been successfully used for decades despite doctors still not knowing exactly how they work. One example of this is Lithium, whose mood-stabilizing properties have been known about for so long that it was once even added to a popular brand of lemon-lime soda. And for more on this, please check out our video Lithium and 7-Up.

Doroshow, Deborah, Performing a Cure of Schizophrenia: Insulin Coma Therapy on the Wards, Journal of the History of Medicine and Allied Sciences, November 14, 2006