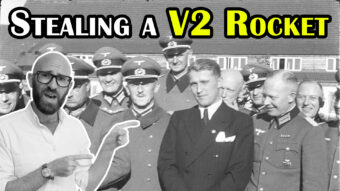 Of all the advanced weapons technology developed by Nazi Germany during the Second World War, perhaps none was as sought after by the Allies as the Aggregat-4 rocket, better known as the V2. Developed at the Peenemunde Army Research Station under the direction of Walter Dornberger and Werner von Braun, the V2 was the world’s first operational ballistic missile, pioneering many of the technologies that would later become standard in most modern rockets, such as turbine fuel pumps, gyroscopic stabilization, and radio guidance systems. Standing 14 meters tall and weighing 12.5 tons, the V2 had a range of 320 kilometres and could be set up and fired in a few hours by highly mobile launching squads, making it difficult for allied aircraft to track down and destroy. And once fired, it was unstoppable, rising to the edge of space before hurtling down at its target at nearly 3,000 kilometres per hour – nearly twice the speed of sound. Between September 1944 and March 1945, around 3,225 V2s were fired at targets in England and mainland Europe killing an estimated 2,754 civilians.

But while the V2 was a technological marvel and a potent propaganda symbol, as a strategic weapon it was a dismal failure. Despite its incredible sophistication, the V2 could only carry a 1-ton explosive warhead, and was so inaccurate it could only be used against city-sized targets. This, combined with the rocket’s tendency to break apart before even reaching its target, meant that its impact on of the war was minimal – all while costing Germany the equivalent of $40 Billion USD – more than half as much as the Manhattan Project – and consuming valuable resources desperately needed elsewhere for the war effort. Furthermore, the rockets were produced by slave labourers in unimaginably brutal conditions, an estimated 26,5000 of whom died in the process. This makes the V2 the only weapon in history to kill more people in its manufacture than in combat.

But while the V2 may not have been the war-winning Germany had hoped for, the Allies immediately recognized it as the weapon of the future, and even before the war in Europe had ended, the mad scramble for German rocket technology began. Infamously, the majority of the German rocket scientists defected to the Americans, who sanitized their nazi past and brought them  to the United States as part of Operation Paperclip. In addition to helping the United States develop missile technology, many of these scientists would form the backbone of America’s fledgling space program and help land men on the moon. The Soviets also captured a number of scientists as well as the development centre at Peenemunde and the underground V2 factory at Nordhausen, while Britain and France captured and studied large numbers of V2 rocket parts.

But often forgotten in this race for German technology is Canada, which although still technically a part of the British Empire had been granted nominal independence in 1931 and was keen to operate militarily on its own terms. So in May 1945, Canada formed the 1st Canadian Army Museum Collection Team, a crack five-man squad tasked with scouring Germany for weapons to bring back to Canada. Leading the squad was 24-year-old Captain Farley Mowat, who would later go on to become a beloved environmentalist and author of such classic books as Never Cry Wolf and People of the Deer. Over the next three months, Mowat’s team collected over 700 tons of German military equipment, ranging from tanks to aircraft to artillery pieces and even midget submarines.

Then, in July 1945, the team stumbled upon the ultimate prize. While speaking to local members of the Dutch Resistance, Mowat learned of a trainload of V2 rockets which had escaped Allied bombing sitting on a railroad siding just west of Nienburg, Germany. The train was being guarded by a detachment of British troops, whose commanders had forbidden Canadians and other ‘Colonials’ from acquiring Germany rocket technology. But determined to bring back a V2 for Canada, Mowat dispatched Canadian Intelligence Corps Lieutenant Mike Donovan on a daring heist mission. Setting out in a jeep from the team’s base in Ouderkerk in the Netherlands, Donovan surveyed the site and discovered that the last V2 in the train was partially concealed by some trees and was accessible by a small road running through the forest. Donovan returned to base, and along with Lieutenant Jim Hood acquired a 12-ton tow truck, work crew, and a trailer for a midget submarine before heading back to the V2 site. While Lieutenant Hood concealed the truck in the forest around two miles from the rocket, Donovan approached the British guards bearing a demijohn of Dutch gin and offered them all a drink. Within hours the entire contingent had been rendered blackout drunk, and as dusk fell Donovan told his drinking partners that he had to relive himself. Instead, he used a radio in his jeep to signal the all-clear to Hood, who along with his work crew drove his truck up to the last rail car, cut the tie-down chains, and managed to roll the 4.5-ton rocket onto the submarine trailer and spirit it away back to Ouderkerk.

Fearing that the British or Americans would try to confiscate his valuable prize, Captain Mowat ordered that the rocket be camouflaged. It was thus fitted with a false wooden conning tower, periscope, and propeller, and given a coat of navy-blue paint in order to pass it off as an experimental midget submarine. In this guise, the rocket successfully avoided detection until finally it was loaded aboard the transport ship

On arrival in Canada, the V2 was sent to the Canadian Armament Research and Development Establishment, or CARDE, in Valcartier, Quebec, where it was carefully disassembled, examined, and blueprinted. During this process it was discovered that the rocket had been armed the whole time, requiring the CARDE scientists to carefully drill a hole in the nose and drain out one ton of high explosive.

In 1950 the V2 was prominently displayed at the Canadian National Exhibition in Toronto, but after this all record of the rocket’s whereabouts seems to disappear. The last reported sighting of the Canadian V2 was in 1961 in the scrapyard of the Canadian Forces Base in Picton, Ontario, in 1961. The base was closed in 1969, meaning that the rocket, which had taken such ingenuity and daring to acquire, was likely bulldozed into a landfill, never to be seen again. And despite having been able to examine such advanced technology early on, Canada never developed its own home-grown satellite-launching rocket like the Americans, Soviets, British, and French did. When the first Canadian-designed and built satellite, Alouette 1, blasted into orbit on September 29, 1962, it was aboard an American rocket.

But the legacy of the V2 lives on. Combined with the War’s other great technological achievement, the atomic bomb, ballistic missile technology would form the cornerstone of the Cold War policy of Mutually Assured Destruction, and shape the course of history for the next 50 years.

#1: The V2 was fuelled by 5 tons of liquid oxygen and 4 tons of 75% ethyl alcohol – essentially 150-proof Vodka. One strange consequence of this fuel combination was that in the closing days of the War, the V2 project consumed nearly all of Germany’s supply of potatoes – further worsening already dire food shortages. The fuel also caused major problems for the rocket development program at Peenemunde, as Army and SS directors noticed that it tended to “evaporate” at a much faster rate than chemistry typically allowed. Yes, it turned out the German rocket scientists were helping themselves to the rocket fuel in order to get rip-roaring drunk, so much so that fuel theft is estimated to have delayed the entire development project by several weeks. In response, the SS added a bad-tasting pink dye to the fuel to render it undrinkable, but the ever-resourceful scientists soon discovered how to filter this out by passing the fuel through a potato. The SS countered by adding a purgative to render the drinker violently ill, but this too backfired, resulting in such high rates of absenteeism that it threatened to derail the entire project. Eventually, a solution was found in the form of Methanol or wood alcohol, which is not only extremely toxic but very difficult to filter or distill out of Ethanol. After one scientist went blind and another died from Methanol poisoning, the drinking problem suddenly stopped.

#2: In the Canadian War Museum in Ottawa, alongside many of the weapons and vehicles captured by Captain Mowat and his team, sits a seemingly nondescript piece of equipment with a surprisingly fascinating history. This collection of cylindrical cans, painted in blue and white camouflage, is known as Weather Station Kurt, and it is all that remains of the only successful Nazi invasion of North America.

The German U-boat campaign against Allied shipping in the Atlantic was dependent on accurate weather reports, and as weather systems in the Atlantic tend to move from West to East, it was necessary to collect meteorological data as close to the North American coast as possible to give adequate warning. At first the Germans used weather ships and manned weather stations, but these were vulnerable to capture by Allied forces, and regular weather reporting by U-boats required them to break radio silence and expose themselves to attach. So in 1943, German firm Siemens developed the Wetter-Funkgerat Land-26, an electronic automatic weather station that could automatically broadcast regular weather reports for up to six months. The system was housed in ten steel canisters, two of which held the meteorological instruments and a radio antenna and the other eight batteries to power the device. In total, fourteen of these stations were deployed by U-boats in various Arctic regions such as Greenland, Spitsbergen, and Norway. Two were intended for the North American coast, but the U-boat carrying one of them, U-867, was sunk in September 1944.

On October 22, 1943, U-537, commanded by Captain-Lieutenant Peter Schrewe, arrived at Martin Bay on the east coast of Labrador, approximately 6 degrees north of the Arctic Circle. After dropping anchor, Schrewe sent technician Dr. Kurt Sommermeyer – after whom the station was codenamed – and ten sailors ashore to install the weather equipment while the rest of the crew worked through the night to repair storm damage U-537 had incurred on the journey over. To prevent sailors and local Inuit from discovering and interfering with the equipment, it was marked as belonging to the non-existent “Canadian Meteor Service” and empty American cigarette packets were scattered about the site. 28 hours after dropping anchor, U-537 departed Martin Bay and resumed its war patrol.

Weather Station Kurt operated for a month before mysteriously going silent, and as the War came to an end in May 1945 it and its fellow stations were promptly forgotten. Then, in 1977, while researching the history of the Siemens company, retired engineer Franz Selinger stumbled upon the papers of Dr. Kurt Sommermeyer, which included pictures of Weather Station Kurt. Intrigued, Selinger contacted W.A.B. Douglas, a historian at the Canadian Department of National Defense, asking if the Station still existed. In 1981, Douglas sailed to Martin Bay, and to his surprise discovered the remains of the station – rusty but mostly intact – exactly where Dr. Sommermeyer had left it more than 30 years before.