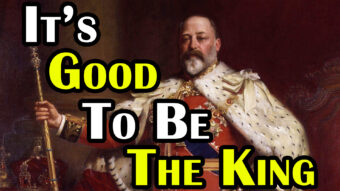 The Edwardian Era, lasting from 1901 to 1910, is often remembered as a final age of innocence before Europe descended into the savagery of the First World War – a gilded period of refinement and elegance. This is somewhat ironic, as for most of his life the namesake of the era, King Edward VII, embodied exactly none of these virtues.

Born Albert Edward, Prince of Wales – but known to his family as ‘Bertie’ – Edward was the eldest son of Queen Victoria and Prince Albert. As heir to the throne, from an early age he was subjected to a strict regimen of academic and moral instruction – a program against which he fiercely rebelled, throwing tantrums and refusing to study or work. This behaviour would persist throughout his childhood and adolescence, defeating his exasperated parents’ every effort at correction. In 1861 at the age of 20, Bertie was enrolled in the Army and sent to a training camp in Ireland in a final effort to impose upon him some kind of discipline. However, this backfired when his fellow officers smuggled actress Nellie Clifden into his quarters so the young Prince could lose his virginity. This incident so scandalized his parents that Prince Albert, already suffering the onset of Typhoid Fever, travelled to Cambridge to admonish his son, declaring: “I knew that you were thoughtless and weak – but I could not think you depraved.”

When Albert died two weeks later, a distraught Victoria blamed his death on Edward’s indiscretion. She would never fully forgive him, declaring: “I never can, or shall, look at him without a shudder.”

With the mourning Victoria withdrawn from public life but refused to let her son take on important royal duties, Edward was left to live a life of leisure, travelling the world, yachting, hunting, horse racing and attending endless parties and other social events. And despite his parents’ efforts to tame him by marrying him off to Princess Alexandra of Denmark in 1863, Edward retained an insatiable sexual appetite that was to become legendary. In addition to carrying out multiple indiscreet affairs society women including actress Sarah Bernhardt and Lady Randolph Churchill – mother of Winston Churchill – Edward frequented the most exclusive brothels in Paris, his favourite being La Chabanais. There he kept a private room decorated with his coat of arms, where his favourite pastime was reportedly to entertain the ladies in a giant swan-neck bathtub allegedly filled with champagne. Such was Edward’s reputation as a womanizer that he soon acquired the nicknames ‘Dirty Bertie’ and ‘Edward the Caresser.”

But by 1890 Edward’s enormous sexual appetite had begun to run afoul of his other great love: that of food. To say Edward was a big eater would be an understatement, his standard dinner being a gargantuan 12-course affair including two kinds of soup, whole salmon, multiple saddles of mutton, sirloins of beef, and whole game birds, devilled herrings, cheese, and cakes. Consequently, he quickly found himself overweight, out of shape, and increasingly unable to perform in the bedroom.

Ordinarily, a man in Edward’s position would have had two choices: lose weight or try different positions. But this being the Prince of Wales, he decided to take a third option. Edward commissioned famous Paris cabinetmaker Louis Soubrier to create what he called a “Siege d’Amour”, or “Love Chair”. Installed in Edward’s private room at La Chabanais, the elaborate gilded device allowed Edward to continue having sex without crushing his partners with his enormous girth. It was also rumoured that the chair allowed Edward to have sex with two women at once, yet while the chair does feature a second cushion on the lower level it is unclear how this was supposed to function.

In 1901 Queen Victoria finally died, and after 60 years of waiting Edward was at last able to ascend to the throne. Despite his parents’ fears and a lifetime of questionable behaviour, during his short reign Edward proved a surprisingly popular and effective king, his gregariousness and social intelligence making him an excellent diplomat and ambassador for England.

As for his infamous sex chair, it remained at La Chabanais until 1951, when the brothel went out of business and its contents were purchased by a private buyer. Its whereabouts remained a mystery until 2011, when author Tony Perrottet interviewed the great-grandson of Louis Soubrier, who revealed that he had re-purchased the original chair. Restored and re-upholstered, Edward VII’s sex chair remains in the Soubrier warehouse, a relic of a bygone age of decadence and a testament to Edward’s unconventional approach to life and the age-old adage: it’s good to be the King.

Speaking of affairs, a common rumor was and is that Richard the Lionheart and Philip II of France were a couple of kings who seemingly would rather have a relationship with a man than produce an heir and a spare, and were particularly fond of one another. But is this actually true?

Well, while Kind Dick has been treated as something of a gay icon for years, direct evidence that he and Philip actually had a homosexual relationship is scant. The source most people point to is a report by Roger de Hoveden, who was a contemporary of the two kings. Here is an English translation of his account:

“Richard, [then] duke of Aquitaine, the son of the king of England, remained with Philip, the King of France, who so honored him for so long that they ate every day at the same table and from the same dish, and at night their beds did not separate them. And the king of France loved him as his own soul; and they loved each other so much that the king of England was absolutely astonished and the passionate love between them and marveled at it.”

In the case of Richard and Philip, the bed sharing and the other statements of love between them are generally thought to have been a political statement.  The two had teamed up to overthrow Henry II, and were just announcing to the world that France and England were allies. About the notion that the two were gay, historian Dr. John Gillingham states,

“The idea wasn’t even mooted until 1948 and it stems from an official record announcing that, as a symbol of unity between the two countries, the kings of France and England had slept the night in the same bed. It was an accepted political act, nothing sexual about it; just two politicians literally getting into bed together, a bit like a modern-day photo opportunity.”

Cooke, Rachel, What the Royals Eat at Home, The Guardian, May 20, 2012, https://www.theguardian.com/lifeandstyle/2012/may/20/what-the-royals-eat-at-home-rachel-cooke