How Poison Gas Gave Us the First Anti-Cancer Drug 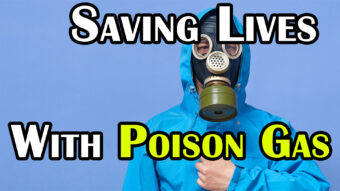 It has been called the Emperor of all Maladies. For the entirety of human history, Cancer has been our constant companion, afflicting young and old, rich and poor, sinner and saint alike. And for most of that history we have been all but helpless against it. It was not until the 19th century that advances in surgery made it possible to safely remove certain tumours, and not until the discovery of x-rays and radioactivity at the turn of the 20th that less invasive treatments became available. But the most common cancer treatment today, chemotherapy, would not emerge until the middle of the century, and by a strange twist of fate its discovery was made possible not by mankind’s compassion and desire to heal, but by its age-old preoccupation with killing.

On September 3, 1943, following a long, hard-fought campaign that had taken Allied Forces from North Africa to the gates of Rome, the Italian Government signed the Armistice of Cassibile, officially switching sides in the Second World War. Italy’s former ally, Nazi Germany, was swift to respond to this betrayal. On December 2, 105 Junkers Ju-88 bombers took off from airfields across Northern Italy and headed South towards the port of Bari, a major supply hub for advancing Allied forces. The bombers achieved complete surprise, and with air defences around the port almost nonexistent they wrought terrible destruction, sinking 28 ships, setting shore oiling facilities ablaze, and killing nearly 2000 military personnel and civilians.

Among the ships destroyed in the attack was the American Liberty Ship SS John Harvey, whose hold was loaded with a secret cargo of 2000 M47A1 mustard gas bombs. Mustard gas, developed during the First World War, belongs to a class of chemical weapons known as vesicants or blister agents. An oily liquid with a strong garlic-like smell, on contact with skin mustard gas inflicts severe chemical burns that can take weeks or months to heal, and if splashed in the eyes can induce temporary blindness. The exploding John Harvey covered the harbour basin in a thick layer of mustard gas, coating hundreds of sailors struggling in the water from head to toe. A huge cloud of mustard gas vapour was also thrown into the air and drifted into the neighbouring town. The next day, more than 600 sailors and soldiers arrived at military hospitals suffering from symptoms that baffled the American medics: chemical burns, blindness, and – strangest of all – extremely low white blood cell counts. But as the John Harvey’s cargo was top-secret, vital information on how to treat the victims was withheld from the medics.

Eventually, Dr. Stewart Alexander, an expert on chemical weapons, was dispatched to Bari. Immediately recognizing the symptoms of mustard gas exposure, Dr. Alexander was able to advise army doctors on the proper course of treatment. But by this point it was already too late:  83 military personnel and an unknown number of civilians had succumbed to the gas’s effects, while many others were severely disfigured. But these men would not die in vain, for  after the War tissue samples collected by Dr. Alexander were to play a pivotal role in launching a medical revolution.

The cytotoxic or cell-killing effects of mustard gas had been noted since the weapon’s introduction, and doctors  soon began to wonder whether this effect could be used against cancer cells. Early trials in the 1920s against lymphomas were unsuccessful as the original form of the compound, sulfur mustard, proved too toxic to human cells. In 1935, however, chemical weapons laboratories began producing new forms of mustard gas in which the sulfur atom was replaced with nitrogen. Of these, one compound in particular, known as mechlorethamine or HN2, showed particular promise as it was the least toxic to healthy human cells. In 1943, pharmacologists Alfred Gilman and Louis Goodman at Yale University conducted the first clinical trial of HN2 on a patient suffering from severe lymphoma. Early results were encouraging, with the patient’s tumours shrinking rapidly. However, the cancer cells eventually developed resistance to the treatment and the tumours soon returned.

Gilman and Goodman continued experimenting throughout the war, but it was not until 1946 when Dr. Stewart Alexander’s report on the victims of the Bari Air Raid were declassified that a breakthrough was finally achieved. Noting the extremely low white cell counts measured in the Bari victims, a team from the University of Chicago’s Medical School led by Leon O. Jacobson turned their attention to leukaemia, a cancer of the bone marrow that results in the overproduction of abnormal blood cells, leading to severe anemia, reduced clotting ability, and a compromised immune system. HN2 proved spectacularly effective, and after several more years of research was developed into the world’s first chemotherapy drug, sold under the brand name Mustine.

On September 21,1946, Gilman and Goodman published a landmark paper detailing their pioneering experiments with Mustine and outlining the drug’s mechanism of action. Mustine was the first of a class of chemotherapy drugs known as alkylating agents, which work by attaching an alkyl group to guanine, one of the four base pairs in DNA. This prevents the genome from replicating and the cell from dividing. Cancerous cells, which have a reduced ability to correct damage in their DNA, are more vulnerable to alkylation and are thus preferentially targeted by drug. Nonetheless, like all chemotherapy drugs, Mustine is also toxic to healthy human cells – especially rapidly-dividing ones like in the bone marrow and sexual organs –  and prolonged exposure can cause other tumours to develop. Such is the delicate balancing act at the heart of all chemotherapy: killing the cancer before the treatment kills the patient.

Mustine is rarely used today on account of its toxicity and it being regulated as a chemical weapon, but its   contribution to medical science is undeniable. The discovery of Mustine heralded a new era in the treatment of cancer, and lead to the development of hundreds of new chemotherapy drugs, many of which are still in use to this day. One wonders whether the inventors of mustard gas, which wrought so much death and suffering on the battlefields of the First World War, could ever have imagined that their creation would one day help save so many millions of lives.

#1: The first use of chemical weapons in modern history is usually given as April 22, 1915, when the German Army released cylinders of Chlorine gas against Canadian, French, and Algerian troops at the Second Battle of Ypres. But three months earlier Germany had actually used artillery shells filled with Xylyl Bromide, a form of tear gas, against the Russians near Bolimow in what is today Poland. However, so severe was the Russian winter that the gas froze solid in the shells and failed to disperse. The Russian cold thwarting an invading army? Where have we heard that before…

#2: The Second World War saw the Germans develop an entirely new class of chemical weapons known as nerve agents. These work by interfering with the breakdown of the neurotransmitter acetylcholine, causing all the nerves in the body to fire at once, leading to rapid paralysis and death. The first nerve agent was discovered by accident in 1936 by chemist Gerhard Schrader while working for the pharmaceutical conglomerate IG Farben. Schrader had been trying to develop a new insecticide to protect crops and end world hunger, but instead produced a substance so toxic it was lethal to human in minutes – whoopsie doodle! Due to the terrifying nature of his discovery, he named it Tabun, after the German word for Taboo. Tabun was followed by even more potent agents including Sarin, Soman, and finally Cyclosarin, tens of thousands of tons of which were manufactured and stockpiled by the Germans.

Yet just like the Allied stockpiles of Mustard Gas and other chemical weapons, Nazi Germany never made use of its nerve agents. Various theories have been put forward to explain this, including a fear of retaliation or Hitler’s experience being gassed as as a soldier during WWI, but the testimony of Hermann Goering- Reichsmarshall and head of the Luftwaffe – during the Nuremberg trials suggests a surprising and rather more mundane reason: horses. Despite the image portrayed by Nazi propaganda of a fully-mechanized force, in reality most of the German army marched on foot, with heavy equipment being pulled by horses. The Wehrmacht grew increasingly dependent on horses as the war went on, as shortages of fuel and spare parts made it difficult to operate trucks and other vehicles. This in turn, made the use of poison gas impossible, as Goering explained: “A horse lies down between the shafts or between the thills as soon as his breathing is restricted. We never had a gas mask a horse would tolerate.…all our material was horse-drawn. Had we used gas you would have retaliated and you would easily have immobilized us.”

Mukherjee, Siddhartha, The Emperor of All Maladies: a Biography of Cancer, Scribner, 2011