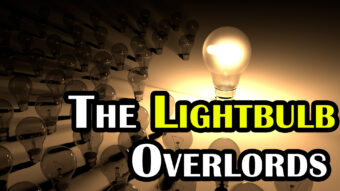 In a dim corner of Fire Station #6 in Livermore California hangs a truly extraordinary object…a lightbulb. But this is no ordinary lightbulb. First installed in 1901, it has been burning almost continuously ever since, having only been switched off a handful of times in nearly 120 years. The Livermore Centennial Bulb has become something of a local celebrity, with the city throwing it a birthday party in 2001 attended by over 1000 people. The bulb even has its own dedicated webcam so that anyone in the world can confirm that it is indeed still shining its light upon the world.

The specific model of the Livermore Centennial Light was invented by Frenchman Adolphe Chaillet in 1897 and manufactured by the Shelby Electric Works in Shelby, Ohio shortly thereafter. According to Chaillet’s patent, improvements introduced by his bulb design include a thick, square-cut tungsten filament shorter and more durable than previous models and a flattened bulb head that projects more light downward when installed in a ceiling fixture. Apparently an extremely durable design, the Centennial Light isn’t the only surviving bulb of this construction, simply the oldest, though many others of the same design are close.

In more modern times, while incandescent bulbs have largely been replaced by compact fluorescent and LED lights, the extreme longevity of the Livermore Bulb design can make one wonder: why don’t today’s lightbulbs last anywhere near as long? Amazingly, the answer lies not in the complex and inscrutable interplay of economic forces but rather in a bona fide dark conspiracy: the Phoebus Cartel.

The early 1920s was both a great and terrible time to be a lightbulb manufacturer,  as the ongoing electrification of the world saw consumers buying electrical appliances like lightbulbs at an unprecedented rate. But this boom came at a price, as hundreds of smaller lightbulb manufacturers popped up around the world, increasing competition and decreasing the market share for any one company. Furthermore, lightbulb technology had reached a point where some bulbs lasted up to 2500 hours, limiting the number of replacements a consumer would have to buy in a lifetime. These developments proved disastrous for manufacturers like German firm Osram, which saw its sales plummet by more than 55% between 1922 and 1923. Seeking to stabilize the market and ensure reliable long-term profits, on Christmas Eve 1924 the head of Osram, Wilhelm Meinhardt, brought together the world’s largest light bulb manufacturers – including the Netherland’s Philips, the UK’s Associated Electrical Industries, France’s Compagnie des Lampes, China Edison, Tokyo Electric, and General Electric’s Brazilian and Mexican subsidiaries – to form a Cartel that came to be known as the Phoebus group.

The stated aim of Phoebus was to:

[secure] the cooperation of all parties to the agreement, ensuring the advantageous exploitation of their manufacturing capabilities in the production of lamps, ensuring and maintaining a uniformly high quality, increasing the effectiveness of electric lighting and increasing light use to the advantage of the consumer.

But in practice the group’s activities had nothing to do with benefiting the consumer and everything to do with minimizing competition and maximizing profits. The Cartel fixed global light bulb prices and placed strict production quotas on its members, imposing steep fines on any who exceeded their assigned cap. Even as improving technology lowered manufacturing costs, prices remained steady, netting the Cartel ever-increasing profit margins. Even more insidiously, Phoebus artificially limited the quality of its lightbulbs, standardizing their longevity at only 1000 hours. Though sold to customers as a trade-off of generating more light per watt, the true purpose of regulation was to increase the number of bulbs customers had to purchase per year. All member companies had to submit their lightbulbs for rigorous testing at a central Swiss laboratory, with any who exceeded the 1000 hour standard being fined. Between 1926 and 1933, average bulb lifespan dropped from 1,800 to 1,200 hours, and by 1934 almost no commercially available lightbulb lasted more than 1,500 hours. Meanwhile, Phoebus’ members enjoyed sales increases of up to fivefold. It was among the first large-scale applications of the strategy of Planned Obsolescence- the practice of deliberately engineering a product to fail or be replaced after a certain period.

Yet despite its near-stranglehold on the global lightbulb market, by the 1930s the Phoebus Cartel was beginning to unravel. As often happens with Cartels, several members began to vie for greater market share, lowering prices and increasing bulb lifespans in defiance of Phoebus’ strict standards. The expiration of General Electric’s basic light bulb patents in 1930 also opened up the Cartel to competition from non-member companies, and GE itself found itself subject to several US antitrust lawsuit, further weakening the Cartel’s profits. But the final nail in the coffin was the start of the Second World War, which made further cooperation between the Cartel’s members impossible. In 1940, the organization was officially dissolved.

Though it lasted barely 15 years, the Phoebus Cartel cast a long shadow over the 20th Century. The lightbulb designs it had standardized with their carefully-engineered 1000-hour lifespans continued to be manufactured long after the war, with few models approaching pre-1924 longevity until the advent of compact fluorescent and LED bulbs. 2019 even saw a re-emergence of the Phoebus model in the form of the National Electrical Manufacturers Association, an organization representing major lightbulb manufacturers GE, Signify, and Sylvania, which successfully lobbied the US Department of Energy to overturn a 2007 law that called for conventional incandescent bulbs to be phased out by 2020. But perhaps the greatest legacy of the Phoebus Cartel is the principle of Planned Obsolescence it helped to perfect, which is baked into nearly every consumer product on the market today, from cars to clothes to smartphones and, seemingly given most LED and CFL bulbs don’t last anywhere even close to their stated potential for various reasons, lightbulbs.

While the Phoebus Cartel was careful not to state their strategy of planned obsolescence outright publicly, later individuals had no such qualms. For example, in 1932, with the world in the depths of the Great Depression, Bernard London, a New York real estate broker, proposed using planned obsolescence to end the economic crisis and ensure lasting prosperity. In London’s scheme, which he laid out in a series of essays published between 1932 and 1935, all consumer products would be assigned a fixed lifespan by the Government. When this lifespan was reached, products would be declared legally “dead” and taken back by the Government for disposal, whereupon consumers would be required to buy a new model. In this manner, London believed, customer demand, production, and employment could be sustained indefinitely. While London’s ideas were never put into practice, the idea of planned obsolescence would reemerge after the Second World War in a new, more consumer-friendly form. Among the most vocal advocates of this new school of planned obsolescence was American industrial stylist Brooks Stevens, designer of, among other things, the Oscar Meyer Weinermobile. Unlike Bernard London’s model of compulsory obsolescence, Stevens’ philosophy held that through a combination of innovative design, advertising, and peer pressure, consumers could be convinced to constantly desire new models of products. As he himself put it:

Unlike the European approach of the past where they tried to make the very best products and make them last forever – meaning that you bought such a fine suit of clothes that you were married in it and then buried in it and never [had] a chance to renew it- the approach in America is one of making the American consumer unhappy with the product that he has enjoyed the use of for a period, having him pass it on to the second-hand market, and obtain the newest product with the newest possible look.

#2) A product it probably won’t surprise you to learn is often engineered to fail early is that wonderful source of never-ending frustration, the inkjet printer. Many of us have experienced that infuriating phenomenon when a seemingly brand-new printer suddenly ceases to work and displays a warning message reading something like “Parts inside your printer are at the end of their service life.” Often this stoppage will prove impossible or prohibitively expensive to fix, forcing us to grudgingly go out and buy a new machine. This type of failure is typically caused by a quirk of the printer’s cleaning system. Whenever the print heads clean themselves, a small quantity of ink is squirted into a sponge-lined receptacle at the bottom of the printer housing. After a certain number of cleanings, the printer is programmed to shut down – a feature originally intended to prevent ink from spilling out and to allow the user to drain the ink receptacle. But more often than not, no provision is given for doing so or for resetting the cleaning cycle, conveniently creating a situation where it is less expensive to buy a new printer than to fix the old one. Fortunately, for those willing to put in a bit of extra work, software patches are often available online to reset the cleaning cycle and allow the printer to keep working. For the rest of us, well there’s always that scene from Office Space…

#3) While Thomas Edison is often credited as inventing the incandescent lightbulb, as happens with pretty much any invention whose time has come, the concept was also developed independently by several inventors including Joseph Swan of England and Henry Woodward of Canada. Edison did, however, develop the first commercially-viable light bulb, which first went on sale in 1880. The key to Edison’s lightbulb was its filament, made of carbonized bamboo, which allowed it to last up to 1200 hours. Workers at Edison’s laboratory in Menlo Park, New Jersey, reportedly tried over 6000 different filament materials before hitting on the right combination. But while revolutionary, Edison’s bulbs suffered from fragile filaments and progressive blackening of the inner bulb surface, and were soon replaced by more advanced models. In 1906, General Electric introduced a bulb with a far more durable tungsten filament and filled with Argon Gas, which was less prone to leakage than earlier vacuum-filled bulbs. This design would form the basis for nearly all incandescent bulbs produced ever since. By the early 1920s when the Phoebus Cartel was formed, light bulbs produced nearly five times as much light as Edison’s first bulbs and lasted more than twice as long.

Report on the Supply of Electric Lamps, The Monopolies and Restrictive Practices Commission, 1948 https://assets.publishing.service.gov.uk/government/uploads/system/uploads/attachment_data/file/235313/0287.pdf