The Nazi Interrogator Who Killed Them With Kindness 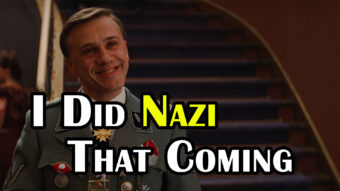 Hitler. Himmler. Goering. Goebbels. Even the most casual student of history knows this roster of infamous Nazis that were responsible for some of the greatest evils the world has ever known. Of the millions that were killed by German hands during World War II, countless thousands were prisoners of war. Often massive numbers of prisoners were killed at a time in acts of retaliation for the killing of German soldiers. POWs and even civilians were routinely turned over to the Gestapo for interrogation, never to be seen again, whether or not they divulged any useful information or not. POWs would do most anything to avoid ending up in Gestapo hands. Hogan’s Heroes provided a less-than-realistic depiction of life in a POW camp. There were few bumbling, indifferent Germans like Sergeant Schultz keeping guard in the Stalag prison system.

Over the decades, the image of the sadistic Nazi interrogator has become commonplace. A bright light in the prisoner’s eye while he’s sitting in a lone chair in the middle of a stark room – the threat or even meting out of torture always just a second away. However, violent means of Nazi interrogation were often unsuccessful. Many prisoners would endure sickening treatment but still only state basic information like name, rank and serial number, or give bogus information to their captors.

But one notable German man, who one prisoner would note could get a confession of infidelity from a nun, employed very different means of interrogation, often with much more success than with the point of a bayonet- killing them with kindness. His name was Hanns Scharff – the kind-hearted Nazi interrogator.

Scharff was born in 1907 in East Prussia, now part of Poland. His father, Hans Hermann Scharff, was a highly decorated soldier in the East Prussian Army who was killed during The Great War. This gave the son a great sense of pride about his dad. Scharff’s mother was from a family that ran one of Germany’s largest textile mills, located near Leipzig, and the elder Scharff worked there prior to WWI. The younger Scharff was raised in the family villa adjacent to the textile complex. He attended school in Leipzig and studied art intensively, which would lay the groundwork for his post-WWII life.

Scharff learned the ropes of the textile business, including marketing and exporting of the businesses’ wares, and quickly moved up the company ranks. He shipped off to the company’s offices in Johannesburg, South Africa, which was supposed to last for a year, but was promoted to Director of the Overseas Division of the textile company. Scharff remained there for nearly ten years, during which time he met and married Margaret Stokes, a South African British woman whose father, Captain Claud Stokes, was a squadron leader in the Royal Flying Corps.

The family would fall victim to very bad timing. In the summer of 1939, they were on vacation in Greiz, Germany, when WWII broke out. Unable to travel, the family was stuck there. Scharff found work in Berlin, but was drafted into the German military in 1939. Thus, began his odyssey to avoid being shipped off to the Eastern Front, where he was slated to be sent. Scharff’s wife was indignant and hysterical about his orders, not only from a spouse’s standpoint, but because Scharff was fluent in English. Frau Scharff believed it was a tremendous waste of his skill to not at least work as a German/English interpreter. She was able to make her way to a German General’s office to plead her case. It’s unclear whether or not she employed the tactics of Forest Gump’s mother to get the General to change his mind, but whatever she did, she was convincing, and he sent a telegram to Scharff’s Panzer division ordering them to send him to the Twelfth Interpreter’s Company in Wiesbaden. The telegram arrived the morning he was to leave for the Eastern Front.

But he was not out of the woods yet. Upon arriving on the train in Wiesbaden, Scharff asked the military police where his unit was located. Unfamiliar with the unit, they ordered him to report to another unit that was headed to the Eastern Front. In desperation, Scharff contacted a high-ranking German officer who had known his father, whom he had told his son to call if he was in trouble and needed an ace-in-the-hole. The friend ordered the new Panzer unit to release him to the proper unit. At that point, he had twice avoided what would probably have been certain death in Russia.

From here, Scharff was trained in British military organization and customs, but he soon became bored with his duties. He told one of his superiors that he was dissatisfied with manufacturing holes in paper and estimated the cost of each hole at five pfennigs. This irritated his general, but nonetheless he sent him to the Luftwaffe interrogation center in Oberursel, one of few granted this privilege, to act as an interpreter for the interrogators. This was the turning point in Scharff’s contribution to interrogation history.

The center was where all Allied airmen captured on the Western Front were taken for interrogation. Scharff was stuck in a lower-level position, but when two of his superiors were killed in a plane crash, he was promoted to head of the United States Army Air Force Fighter Section. It was then that he was transferred to the Luftwaffe from the Army, though at the same rank. He quickly became soured on harsh interrogation techniques. Although these violent methods were largely off of the books, and an official list of less drastic techniques was published, they were still the order of the day. He had witnessed these intense and violent episodes and decided that he’d do things differently.

And so it was that Scharff would use the role of “Good Cop” to achieve his goals. Scharff first gained the trust and confidence of the captives, plying the captives with long walks in the woods, his wife’s baked delicacies, casual conversations, good medical care, and even letting one POW fly a plane. Beyond all these little kindnesses, he would sell himself as their biggest advocate with his superiors. He was the one who could keep them from the Gestapo, but only if they worked with him and played ball. No Nazi dentist would dig into their gums and ask them, “is it safe?”

His methodology was as follows: get to know the POW, and then allow him to talk without coercion. Along the way, Scharff pretended to know everything beforehand, but stated that his superiors insisted that the information come from the captive. Then he would either confirm that he knew the information or discontinue the conversation. This eventually became known as the Scharff Method, and it was highly successful. POWs often offered up vital intelligence on their own through his trickery. No brutality, no torture…no raising of voices. No use of the Gestapo.

Maybe the most classic example was Scharff suggesting to a POW that a chemical shortage caused American tracer bullets to leave white smoke instead of red. The airman replied that this was not the case – they were white to indicate low ammunition. Naturally, this was extremely useful information for the German forces.

Through his methods, Scharff was able to put together extensive dossiers on American pilots, especially the higher-ranking ones. This included information about their hometowns and families, their press clippings, and even information about common American and British pilot behavior when off duty. As such, he was able to more easily bamboozle POWs. He was also allowed to wear street clothes, which led captives to believe he was much higher ranking than he actually was.

During the remainder of the war, Scharff interrogated all manner of famous, high ranking pilots. This included Lt. Col. Francis Gabreski, who was the top American fighter ace in Europe in WWII. Scharff even had Gabreski’s picture on the wall in his office, and was thrilled to meet him. However, even Scharff’s techniques could not pry information from Gabreski. He was one of the few POWs who did not provide useful information during interrogation from Scharff.

This is noteworthy as it’s estimated he interrogated around 500 POWs, with only a couple dozen or so providing no useable intelligence to him.

Further showing how friendly he was able to get with all these prisoners, most of the men he interrogated would go on to happily sign his guest book before being transferred.

As you might expect from his extreme success and rather unusual methods for the day, Scharff’s public profile greatly increased after the war. Like German rocket pioneer Werner Von Braun, he was useful to the United States, and because he was not an insidious Nazi, he wasn’t tried at Nuremburg, nor did he have to escape to South America. In 1948, he was asked to come to the United States to interrogate Martin J. Monti, who defected to Germany in 1944. He was also asked to testify during Monti’s trial.

The U.S. Air Force also adopted several aspects of his methods. More recently, after controversy over “enhanced interrogation techniques” in the War on Terror and the uproar over alleged torture at Abu Ghraib prison, President Obama launched the FBI’s High Value Interrogation Group. It spent millions studying and presumably utilizing Scharff’s methods. Scharff also continued his friendship with the aforementioned Lt. Col. Gabreski after the war. The two reenacted an interrogation in 1983 at a reunion of Stalag Luft III POWs in Chicago.

On that note, Scharff eventually settled in the United States and became an American citizen. The rest of his life’s work has likely affected many more Americans than his interrogations. Scharff had studied art in his younger days, and developed his craft into a successful business. He had a gift for mosaic-based art and furniture, and found instant success with this endeavor in New York. He eventually brought the business to Los Angeles. His daughter-in-law, Monika Scharff, joined him and became his business partner for the new “Scharff and Scharff” company. It is still in operation today. Among their well-known works are the large mosaics of the Cinderella story in the Cinderella Castle at Walt Disney World in Orlando, Florida. Others include mosaic entry ramps at Epcot Center, mosaics at several colleges and in hotels, homes, stores and churches around the globe.

Scharff passed away in 1992. His story lives on in a print. Some of his memoirs were published in a 1950 article in Argosy Magazine. In 1978 military writer Raymond Toliver collaborated with Scharff to publish the book, The Interrogator: the Story of Hanns Scharff, which was re-published with a different company in 1997. It was a mixture of Scharff’s memoirs and Toliver’s supporting biographical work.

Scharff’s legacy in interrogation continues to grow to this day. Scharff’s tactics have been studied at length by Par Anders Granhag, who is a professor of psychology at Sweden’s University of Gothenburg. Granhag is considered the leading authority on Scharff and his techniques. As for Scharff’s extreme success, Granhag states that Scharff was able to manipulate and contradict the POWs assumptions about interrogation which, in turn, circumvented their counter-interrogation training. Thus, the deception and new level of comfort made them ripe for the taking.