How Do Sodas in Outdoor Vending Machines Not Freeze in Winter?

October 9, 2019 Daven Hiskey
Trunksme32 asks: How do outdoor vending machines keep the coke from freezing in the winter? 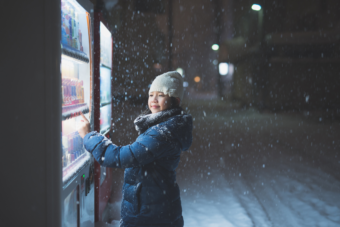 Vending machines of some form or another have been around at least since the 1st century AD, with the first known of such being supposedly made by Hero of Alexandria, a Greek engineer who invented, among many other remarkable machines, one to automatically dispense holy water. (Though it should be noted that many historians think it likely that at least some of Hero’s machines were probably invented by others before and simply documented by Hero.) Whatever the case on this one, as described in The Pneumatics of Hero of Alexandria,

If into certain sacrificial vessels a coin of five drachms be thrown… When the coin is thrown through the mouth…, it will fall upon the plate… and, preponderating, it will turn the beam…, and raise the lid… so that the water will flow: but if the coin falls off; the lid will descend and close the box so that the discharge ceases.

Thus, in a nutshell, you deposit a coin of sufficient weight, it drops onto the plate. This causes the plate to tilt down, opening a valve, which in turn allows the holy water to flow. Soon the plate will tilt enough that the coin falls off, at which point a counter-weight pulls up said plate. When it reaches its top position, the connected valve is shut.

Of course, this machine had no mechanism for continuing to work properly if the holy water froze. Clearly Hero was smart not to quit his day job as a teacher…

Moving swiftly on to relatively modern times, vending machines of a variety of types began popping up more and more over the centuries, with an explosion in popularity occurring during the 19th century. For example, by the 1890s the German chocolate maker Stollwerck was operating a network of close to 15,000 vending machines that dispensed their chocolate.

Around the early 20th century, selling beverages in vending machines became just as ubiquitous, though not storing bottled drinks at first, instead simply dispensing water and the like from some form of fountain. Notably here many of these early fountains did not provide cups, other than a single common container… Naturally, this metal can shared by everyone who used a drinking fountain, whether of the vending machine variety or free for public use, was eventually deemed less than sanitary. So much so that laws were passed in some regions banning them.

In attempting to find a solution to the problem, lawyer Lawrence Luellen envisioned disposable paper cups that could be dispensed for a penny (about 29 cents today) via a specially designed vending machine. And so it was that the American Water Supply Company of New England was founded in 1908, eventually becoming the more familiar sounding Dixie Cup Company. Beyond just dispensing disposable cups, one design, the “Luellen Cup & Water Vendor” also contained a large jug with water, a large ice container to keep the water cold, and a garbage can to put the cups in after use. Much like Hero’s and the other beverage drinking machines up to then, this one had no means of keeping the liquid from freezing either.

This finally brings us to slightly more modern times. Ubiquitous today, with Japan having the highest number of vending machines per capita at just under 6 million (or about 1 vending machine for every 22 people), one of the most popular vending machines is the kind that dispenses life giving water-based product. For some odd reason, many of these are placed in that eerie region that exists outside of our mother’s basements known as “out of doors”. This area, which exists in a region that has no solid barriers between you and the never ending void of space, occasionally gets cold (we’re told), despite the silent glowing orb in the sky watching, judging, showering us in ionizing radiation in its efforts to destroy us all!

While you might think surely these modern outdoor units which exist in such a deadly environment must have some sort of dedicated heating mechanism inside, it turns out this isn’t always the case, even in relatively frigid areas. To be clear here, the varieties of designs of vending machines out there are immense. But, it turns out that the tiny bit of heat given off by the internal evaporator fan and circuitry is, in many climates, sufficient to keep any drinks inside from freezing.

You see, in order to be as energy efficient as possible, bottled beverage machines are extremely well insulated and sealed. In fact, in some modern peak shift vending machines, they primarily cool the internal beverages at night when electricity is cheapest, bringing the liquid as close to freezing as possible without turning their innards solid, and then just let the insulation do the rest during most of the day time. Coca-Cola reports their machines using this design on average use only about 5% of the daytime energy usage as more typical machines.

Beyond insulation, the sugary or diet drinks generally found inside have much lower freezing points than pure water. These two things combine to make it so active heating is not really needed in many regions. As one vending machine stocker in Kansas, which for reference sees average lows in its coldest month of January at around 20 degrees Freedom or -7 degrees Celsius, notes, “[In] 30 years I have only seen 1 freeze up…The evaporator fan motor will provide enough heat to keep it from freezing…provided everything else is sealed up good…”

That said, some regions get colder and require more than just passive heating. The most common mechanism for dedicated heating is simply wiring in an incandescent light bulb socket and screwing a 40 or 60 watt bulb in. This is then automatically switched on when temperatures drop below a set level. As for the location of the bulb, it is usually placed near the top of the innards to ensure the drinks below, which are dispensed first in many designs, stay as cold as possible away from the heat source.

For those wishing for an alternate solution, some machine designs use heat pump systems capable of reversing and heating the inside. Beyond allowing these units to function well in even some of the coldest of populated regions, these systems are also among the most energy efficient at cooling as well.

But to sum up, thanks to being well insulated and the lower freezing points of many of the liquids contained therein, the heat given off by the internal components in vending machines is usually sufficient to keep things from freezing. Where not sufficient, a simple incandescent light bulb relatively cheaply solves the problem in even some of the coldest populated regions of our little planet sized space ship.