The Bizarre Story of the Seattle Mystery Vending Machine 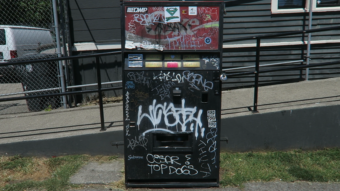 In the city of Seattle, Washington there exists a vending machine that over the years has become something of a local landmark amongst residents who are familiar with its mysterious history. Situated on the corner the John Street and 10th Avenue East in the bustling Capitol Hill neighbourhood, the seemingly ancient machine is well known for dispensing random, sometimes rare, cans of soda- a fact that’s made all the more intriguing when you consider that nobody seems to know who stocks the machine or where it came from.

Covered in Coca Cola livery and a smattering of graffiti, the machine’s most notable feature, other than its age, is the fact that there’s no option to order a specific drink from it. Instead, after putting the requisite amount of change into the machine, you are given the option of pressing one of six buttons, each of which sports an apparently custom-made (and heavily faded) label that simply reads “?MYSTERY”. Pressing one of these buttons will then cause the machine to spit out a random can of soda.

Exactly how many different kinds of soda are stored inside of the machine at any one time isn’t known and there are reports of people dropping tens of dollars into it at once in an attempt to discern what, if any, pattern there is to the kinds of soda dispensed. The result is invariably the person walking away with dozens of cans of weird tasting soda, but no answer.

What makes the whole thing weirder is that a a small percentage of the sodas the machine dispenses are incredibly rare, if not otherwise impossible to acquire via conventional means due to them being discontinued or only available for sale outside the United States.

For example, people using the machine are known to have walked away with cans of soda that haven’t existed or been popular since the 1980s, like Lemon-Lime Slice and Pepsi AM, or obscure drinks like Diet Hubba Bubba Bubblegum Soda and even bacon infused Coca Cola… There are even rumors that people have gotten cans of New Coke and Crystal Pepsi from the machine.

As if this alone wasn’t unusual enough, the machine has also been known to sometimes spit out otherwise normal brands of soda, but with the cans sporting vintage livery that hasn’t been used in decades.

To date the only real common thread between the cans dispensed by the machine anyone has noticed is that it only ever seems to contain brand-name soda produced by either Coca Cola or Pepsi.

Curiously, despite being targeted by countless vandals and irate customers over the years (the machine has a propensity to eat bills particularly, but also sometimes change), Seattle residents familiar with it note it’s almost never out of service and report that any time the machine is damaged, it is generally fixed within a day or so.

It’s similarly reported that after the machine was broken into one time it was restocked and working before the week was out. It was then modified so that it was anchored to a nearby wall with a heavy padlock attached to protect the sweet syrupy nectar housed within.

That said, when the staff here at TodayIFoundOut went to go check out the machine a few weeks back in June of 2018, while many people were still attempting to use the machine, including ourselves, it wouldn’t dispense any soda, though happily collected people’s money. We could also hear the compressor working to keep the sugar water inside cold, so it wasn’t completely broken.

It would seem whoever stocks the machine finally got wise to the problem as the machine suddenly disappeared in late June. The owners of the machine did leave behind a taped note in its place stating the machine “Went for a walk.” On the machine’s Facebook page a message was also posted stating “Going for a walk, need to find myself. Maybe take a shower even.”

Presumably this all means the machine is in for repair and to remove the many layers of graffiti currently adorning it.

Bizarrely, despite all of this and the fact the machine is evidently being restocked on a fairly consistent basis given how frequently it is typically used because of its tourist attraction status, it’s unclear who actually owns and operates it.

They do, however, claim the machine has been there for a couple decades, which is more or less corroborated by local residents, give or take a few years depending on who you talk to.

Now, at this point you may have found yourself thinking, “Okay, but surely the city knows who owns the machine because whoever owns it must have a permit or something, right?” Well, Jessica Lee of The Seattle Times had that exact same thought and reached out to city officials about the matter in an attempt to discern once and for all who actually owned the machine. According to Lee, a spokeswoman for the city eventually got back to her and explained that, for some reason, the city didn’t have any records pertaining to the machine in question.

Unsurprisingly given the near total lack of concrete information we actually know about the machine, Seattle residents have naturally come to the conclusion that the machine might actually be haunted. No doubt the machine will soon have its own show on the History Channel with time traveling aliens being the most likely maintainers of the device…

But for now, despite all the hoopla about it and the surprisingly popular tourist attraction it has become, there exists a more mundane explanation.

While most locals living nearby likewise report never seeing anyone stocking the machine, a few have come out and stated they’ve seen an unmarked white van pull up in the middle of the night with the driver stocking it. Twitter user Sarah Hamilton (@saeofdoom) even once managed to snap a picture of a man and a woman stocking the machine in broad daylight… Sadly, ET was nowhere in sight at the time.

But even with that picture, nobody has yet identified the couple shown.

And that seems to be the way everyone wants it.  If someone were to actually resolve the mystery (which presumably would be pretty easy with a hidden camera and some moderately good research skills), it would kind of ruin the fun of the thing and the once famous attraction would cease to be anything more than an old vending machine that occasionally eats your money and spits out random flavors that were probably discontinued or aren’t super popular for a reason…