Who Invented Rock, Paper, Scissors and What’s the Best Way to Win Consistently? 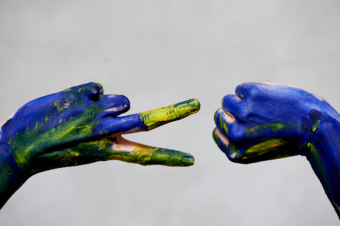 Hand based games have been around seemingly as long as humans have been humaning. As to the exact genesis of Rock, Paper, Scissors, however, this appears to originate in hand games from China, supposedly going back about two thousand years, though primary documented evidence of this is scant. That said, the trail gets much more clear starting around the 17th century which saw some of these games having migrated over to Japan and explicit references to them in surviving text. One of those games, in turn, spread from Japan throughout the world in surprisingly recent times. We are, of course, referring to Rock, Paper, Scissors.

As noted, in the early going, there were a myriad of these hand games using a series of hand gestures, sometimes even using various chants. As for the many three hand gesture variants, these are called sansukumi-ken.

If you’re now wondering how a snake is beaten by a slug in the Japanese version, it’s hypothesized that when the Japanese adopted the game from the Chinese, they simply misinterpreted the character for a certain poisonous centipede used in said Chinese version, with that then representing the slug in Japan because of it.

As for the direct ancestor to Rock, Paper, Scissors, that is the game of jan-ken, which has been played in Japan going back to around the 17th century and uses the Rock, Paper (or cloth), Scissors trio of hand gestures we’re all familiar with.

Interestingly, up until relatively recently, these games were primarily used as drinking games, particularly extremely popular at Chinese and Japanese brothels. Beyond used for getting tipsy, they were also used for a similar purposes as a game like strip-poker. On that note, in more modern times (since around the 1970s when it was used this way on a television program), Yakyūken is a version of Rock, Paper, Scissors played in Japan that is the game of choice for the hand gesture equivalent of strip-poker.

Of course, these games eventually found there way outside of brothels, becoming particularly popular with children starting around the 19th century. For example, in the early 19th century Bunka 7 document, the author expresses his amusement of children playing brothel games, stating,

In former days children used to play red-shell-horse-riding or they fought with the shell of mussels. Of today’s children…they play also mushi-ken, fox ken, and original ken. How funny!

As to how it then spread the world over, this wouldn’t actually happen until much more recent history, based on documented accounts seemingly occurring between the 1920s and the 1950s.

For example, some of the earliest references of the game outside of Japan include one account in France in 1927 where it was called “chi-fou-mi”, or another in Britain in 1924 where it was called “zhot”, and yet another in a 1933 edition of the Compton’s Pictured Encyclopedia- in all cases with it being explained that it was a game played in Japan. The respective authors then described the rules and how it’s played.

As to why this particular hand gesture game caught on in the wider world when so many others did not, it’s speculated that it’s because it is one of the simplest to understand and play, as well as that it makes a very effective and seemingly random way to settle a dispute or decide something between two individuals.

Fast-forwarding to today, the game has even become a competitive sport with various organizations formed in different countries. For example, in 2002, the brothers Walker formed the World RPS Society and formalized the rules for international competition. They held the “Rock, Paper, Scissors World Championships” in Toronto every year from 2003 to 2009, which was even televised on Fox Sports Net at one point.

The co-author of this very article, Matt Blitz, even competed in said tournament from 2003 to 2005, including finishing in the top 64 in the world in 2005 after valiantly suppressing a robot uprising when he squared off against a Rock, Paper, Scissors-playing robot and soundly crushed it. He also defeated an exceptionally inebriated human female.

At this point you might be wondering about ways in which to improve your odds of winning at Rock, Paper, Scissors.

To begin with, statistically men are a few percentage points more likely to start with rock, while women are similarly slightly more likely to start with scissors. To attempt to ensure this tendency will be followed, one strategy is to not give the person any time to think. You simply challenge them to the game to decide something and start pumping your fist to get them to join in and hope the slight natural tendency will kick in. To improve your odds even further, make it a best of three or best of five.

From there, we move on to a study by Zhijian Wang and co. Cycle frequency in standard Rock-Paper-Scissors games: Evidence from experimental economics done at Zhejiang University using 72 students playing 300 rounds of rock, paper, scissors. It turns out that while overall what a person ended up picking seemed completely random based on the overall throws, which were essentially evenly distributed in the large sample-size, when looking closely there are actually very clear patterns.

Further, players who repeat the same sign twice are extremely unlikely to throw the same sign a third time, allowing you to improve your odds slightly by ruling that one out as something they’ll pick in most cases. Thus, if they throw scissors twice, your next throw should be paper, as they are likely to choose either paper or rock, improving your odds of a tie or win.

Thus, assuming your opponent does not know any of this, the larger the sample size you play them with, the more likely you are to win the overall match against them employing these tricks.

Moving on from playing the odds, if you have fast reflexes, a rather shady way to improve odds is to watch how the final hand drop is going. It turns out most amateurs (which is basically everyone) will start to move their fingers, if not choosing rock, almost immediately upon the final descent of the hand- rookie mistake.

In this case, if the thumb of your opponent is held tucked and fist showing no signs of unclenching half way down the pump, this usually implies rock, or a more seasoned player. If there is any movement of the fingers as the fist starts to go down, it’s going to be scissors or paper. From here, if you’re not fast enough to register exact finger movement and then mentally process that, you should always go with scissors to ensure a tie or win.

Both to help guard against someone employing this strategy against you and to keep yourself in a more easily changed position without being too obvious, you should always default in your mind to rock and then only change at the last possible second as needed based on what you are seeing from your opponent.

Moving on from human reflexes, it turns out with a little ingenuity, this observational method is a way to win 100% of the time in theory, as demonstrated by a group from the University of Tokyo in 2012 who created a robot that used this very method to win every single time against a human opponent. This particular robot could adjust its play within a millisecond or so once it determined what the human was going to throw based on initial finger movement or lack-thereof. Thus, for a person really serious about their Rock, Paper, Scissor play who doesn’t mind cheating, all you need is to write a bit of software paired with a reasonably high speed camera and a Bluetooth earpiece in your ear. Victory every single time. Pretty sure this is a million dollar phone app idea actually…

Another popular method used in tournament play particularly is to attempt to throw your opponent off by telling them what you’re going to throw before you throw it, or alternatively shouting one of the three directly before they show their hand. It’s not really clear how much this actually helps, as we could find no hard data to back up its efficacy, but many a tournament player does it anyway. If nothing else, it makes the game a little more interesting.

Finally, if playing an opponent who knows all the tricks and you don’t feel like using the slightly cheating method of reacting to hand movements, it’s generally advisable to pick completely randomly and evenly distribute your choice over a large sample size to 1/3 of each. However, as it’s not technically possible for a human to reliably do this, some tournament players will simply use a bit of software to randomly pick an evenly distributed sequence for them and then memorize and use that when competing.

That said, looking at the wider body of, for lack of a better word, “pro” players at tournament, according to an analysis by the World RPS Society, in their tournament play, they observed Rock being played 35.4% of the time, Paper 35% of the time, and Scissors 29.6%. As to why tournament players seem to strongly favor Rock and Paper, this isn’t clear, although it is noted that most tournament players are male, and males are more likely in general to go with rock. On the other side, more researched players that know this may choose to try countering with slightly greater instances of paper to beat a rock aggressive opponent.

In America, another name for Rock, Paper, Scissors is “Rochambeau”. So how did it get this name? The commonly held story is that it is from a French general by the name of Jean-Baptiste Donatien de Vimeur de Rochambeau who came to the colonies to assist the Americans in gaining their independence from the British in the Revolutionary War. It’s commonly stated that Rochambeau introduced the game to the new nation while he was in America, but the timetables don’t really line up here from documented instances of the game. So while widely touted as an explanation, it is likely a myth. That said, it may actually be that Rochambeau really did inspire the name anyway.

Historian John Buescher from the University of Virginia notes that the first published reference to the game in the United States comes from a 1932 New York Times Article about Tokyo’s rush hour and a game played during commuting. In the article, the rules to the game are described in detail, again lending to the idea that it was still pretty new to the United States at this point.

Fast-forwarding 3 years, in 1935, The Handbook for Recreation Leaders compiled by Ella Gardner was published by the Children’s Bureau. Gardner was considered the government’s child recreation expert. In the book, the game “Rochambeau” is described as such for the first known time under that name.

Noteworthy here is that, at the time, the Children’s Bureau was located a mere block away from a statue of Count Rochambeau, which was erected in 1902 in Lafayette Square in Washington DC, and had recently been the focus of the 1931 sesquicentennial celebration of the Yorktown surrender.

In the original Japanese version it is common to say “jan-ken-pon” as you pump your fist up and down. Thus, Professor Buescher hypothesizes that Gardner, or someone else involved in the government creating book, got the idea to switch the Japanese to something with a bit of American patriotism- substituting “jan-ken-pon” to “Roch-am-beau”. It’s also noteworthy here that this particular publication was read by many teachers, parents, and the like throughout the nation, perhaps spreading this name in the process during a time when it would have been the first instance of most in America ever encountering Rock, Paper, Scissors.