Why is the Stereotypical Image of Aliens Green/Grey Bald Humanoids? 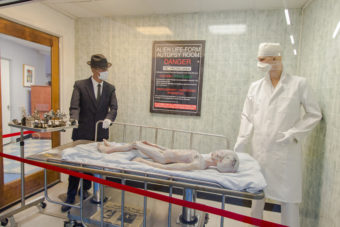 As to little green men, the concept of green beings has been around for centuries, from Goblins to perhaps one of the most famous cases- the green children of Woolpit. For those not familiar, these were two children that seemed to have lived during the 12th century in England. When they were discovered in the fields, the little boy and the girl had green-tinged skin, wore strange clothes, spoke an unfamiliar language, and both refused to eat regular food for some time, apparently unfamiliar with it. If you’re interested in who they were, why their skin was green, and where they came from, check out our article here.

Fast-forwarding to the late 19th century, we have the first known instance of the term “little green men” being used to describe aliens, found in the Green Boy From Hurrah published in the Atlanta Constitution in 1899. In it, the story describes a short green skinned alien from- you guessed it- the planet Hurrah.

Much more famously Edgar Rice Burroughs’ early 20th century Barsoom series featured green aliens from Mars, though in this case they weren’t little at all, being about twice the height of humans.

Yet another mention from the early 20th century comes from the 1908 edition of the Daily Kennebec Journal where the term “little green man” is used referring to a Martian.

By the time of Orson Welles’ famed War of the Worlds broadcast in October of 1938, it would appear this idea was firmly established in pop-culture. After the supposed mass-panic that happened during that broadcast (which, in truth, didn’t actually happen at all contrary to popular belief), this nevertheless saw many columnists reporting on it the next day using the term “little green men” synonymously with “alien”. As is often the case today, these accounts seemed to mostly use the term more in jest to poke fun at the whole thing rather than literally describing aliens.

The trope has pretty much survived ever since in pop-culture, with short, green aliens appearing in countless fictional productions, including Doctor Who, Star Trek, Toy Story, and, perhaps the most famous of all little green aliens- Jedi Master Yoda.

Interestingly, despite widespread reference to “little green men” in many a news account describing potential abductions, among the alien abductions posited by ufologists as being somewhat credible, there has not yet been any where someone has claimed to have been abducted by “little green men” type aliens. (Though Lizard People are a thing, which we’ll be getting to in an upcoming article, assuming the Lizard People don’t silence us first.)

In contrast to the lack of little green men abductions, “little grey humanoids” is a popular description given by those who claim to have been abducted, accounting for a whopping 43% of all alien abduction reports in the United States,  50% in Australia, and 90% in the United States’ hat. As to why grey aliens prefer Canadians, we’re pretty sure it’s just because they’re super nice up there, if horrible drivers. Just as interesting is that only 12% of abduction reports in the UK and 20% in the rest of Europe describe some variant of grey skinned aliens doing the abducting.

So where did the common idea of hairless, large headed, black-eyed, grey skinned aliens actually come from in the first place?

The first documented instances of a description of such beings, though in this case with them being our own evolved selves, comes from H.G. Wells’ 1893 “Man of the Year Million”. In it, he describes humanity having evolved into large headed, black, oval-eyed, short grey-skinned beings, similar to what is commonly depicted when most people today think of grey aliens. Wells later repeated similar descriptions in other works, including sometimes representing aliens. (Clearly Wells must have been in the Lizard People’s inner circle to know about the grey aliens long before anyone would be abducted by them.)

From there, among others, Gustav Sandgren doubled down on this description of aliens in his 1933 book titled The Unknown Danger, where he states,

the creatures did not resemble any race of humans. They were short, shorter than the average Japanese, and their heads were big and bald, with strong, square foreheads, and very small noses and mouths, and weak chins. What was most extraordinary about them were the eyes—large, dark, gleaming, with a sharp gaze. They wore clothes made of soft grey fabric, and their limbs seemed to be similar to those of humans.

Fast-forwarding to 1947, the Roswell UFO incident purports to have featured little grey aliens, which has since further kept the trope alive.

That said, perhaps no other event solidified the idea of grey aliens in pop-culture more than one of the first ever instances of a supposed real life alien abduction. The people abducted were a husband and wife couple called Barney and Betty Hill in 1961.

In a nutshell, the couple were driving home from a trip late at night on September 19, 1961 in New Hampshire, when at approximately 10:30p, Betty claims to have seen a mysterious light off in the distances. Eventually the coupled stopped the car to get out and investigate, as well as to allow their dog to water some trees. In the meantime, Barney used a pair of binoculars to get a closer look at the mysterious light and observed a flying saucer of some sort off in the distance.

From here there is a gap in their memories until they were about 35 miles down the road. Perplexed with about two hours of missing time, the missing memories of a part of their road trip, minor scrapes and some damage to their clothing and back of their car, they otherwise shrugged it off and went to bed when they got home.

Shortly thereafter, Betty read a book about UFOs and then began to have some strange dreams, with her speculating to Barney that maybe they had been abducted by aliens as she vividly experienced in her dreams. Her husband, however, was having none of it at first. That is, until two years later when he and Betty underwent hypnosis to try to draw out repressed memories and he started remembering the event himself.

In short, Betty gave two accounts, one from her dreams and one from her supposedly recovered repressed memories, which differed considerably on several points. What she ended up supposedly remembering was some reasonably friendly grey, hairless aliens (initially claiming with huge bulbous noses, though she changed her story on that one later). The aliens took the couple aboard their ship and then gave them a thorough and a bit violating examination. At one point, while chatting with Betty in English, but seemingly telepathically, one of the examiners showed her a star chart map of where they came from.

Her husband also had similar memories, though less detailed as apparently he kept his eyes closed much of the time because of the alien eyes feeling like they were boring into his brain. He did report being probed anally as well as having some of his sperm extracted, among other things more or less similar to Betty’s experience.

However, among various discrepancies between their stories, he described the aliens as having hair and wearing Nazi-like uniforms.

Of course, as we previously noted in our article on whether repressed memories are actually a thing, the methods used in hypnosis and to try to recover supposed memories are quite literally textbook ways to get people to create false memories, sometimes even quite fantastical ones. Thus, purported memories recovered in this way tend to be treated with quite a bit of skepticism in modern times.

And, in fact, even then, the psychiatrist who hypnotized them, Dr. Benjamin Simon, concluded this very thing- that while he fully believed Betty (and then Barney himself finally believing after hypnosis) were completely sincere that they had been abducted, the good doctor believed their “memories” were not real and simply inspired by Betty’s dreams and research of various alien related content. Dr. Simon was apparently well ahead of his time.

On that note, a lot of the elements the couple described about the aliens resembled those already depicted in various works of fiction. Further, the technologies the aliens used were amazingly antiquated, mirroring the types of things you’d expect of someone living in 1961. On top of that, a beacon light on Cannon Mountain existed that was fully visible on the road approximately where Betty and Barney claim to have seen the mysterious light.

Betty’s later accounts of additional experiences with aliens would further erode her credibility in the eyes of most ufologists. As noted by paranormal investigator Robert Sheaffer,

I was present at the National UFO Conference in New York City in 1980, at which Betty presented some of the UFO photos she had taken. She showed what must have been well over two hundred slides, mostly of blips, blurs, and blobs against a dark background. These were supposed to be UFOs coming in close, chasing her car, landing, etc… After her talk had exceeded about twice its allotted time, Betty was literally jeered off the stage by what had been at first a very sympathetic audience. This incident, witnessed by many of UFOlogy’s leaders and top activists, removed any lingering doubts about Betty’s credibility—she had none. In 1995, Betty Hill wrote a self-published book, A Common Sense Approach to UFOs. It is filled with obviously delusional stories, such as seeing entire squadrons of UFOs in flight and a truck levitating above the freeway.

Nevertheless, the original incident made the news rounds and even inspired some productions based on the event, helping to popularize and reinforce the notion of grey aliens, even if not exactly as is otherwise commonly depicted. In fact, because of Betty and Barney, grey aliens are sometimes called Zeta Reticulans. This comes from the fact that Betty’s drawing of the star map she supposedly saw while on the ship was determined to line up with a binary system about 39.2 light years from Earth called Zeta Reticuli. That said, the idea that her description matched Zeta Reticuli was later debunked for various reasons. Nevertheless, the name has stuck.

On top of helping to popularize the Greys, the Betty and Barney abduction ended up kicking off a slew of others claiming they were likewise abducted with relatively similar stories.

The stereotypical view of grey aliens that had been around for over a half century up to that point was subsequently continually reinforced in cinema and TV since, such as in the 1977 Close Encounters of the Third Kind, as well as the 1989 Communion, starring Christopher Walken, based off the New York Times Bestselling book of the same name released two years before. After that came X-files, Stargate SG-1, South Park, and many more productions featuring variants of the Greys, ensuring the stereotype lives on long past H.G. Wells, who seemingly originally came up with it… or so the Lizard people would have us believe.