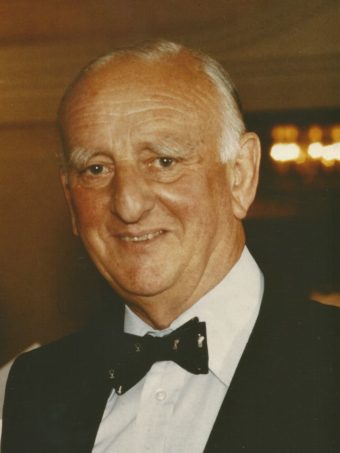 On August 9, 1991 at about 6:30 in the evening, thousands of motorists heading home after a long day of work across the UK were forced to pull over and stop due to a brief comment they’d just heard during a sports broadcast. The comment wasn’t reporting  a shock loss or injury, but a joke made by cricket commentator, Jonathan Agnew, with the aftermath being so funny people had to pull over to avoid crashing their cars.

The incident occurred during a rundown of that day’s cricket by Agnew and his longtime fellow commentator, Brian Johnston. Prior to Johnston’s passing in 1994, the pair were well-known for their on-air chemistry and penchant for straight faced jokes and school-boy humor. For example, in one broadcast, Johnston stated of one Peter Pollock who broke his ankle, “He’s obviously in great pain. It’s especially bad luck as he is here on his honeymoon with his pretty young wife. Still, he’ll probably be all right tomorrow if he sticks it up tonight.”

Johnston was also a great lover of practical jokes, with one of his favourite being to ask people questions live-on-air just as they’d shoves a slab of cake in their mouth. At this point, you may find yourself thinking, “Okay, that sounds funny, but how often would a cricket commentator find themselves eating cake live-on-air?”

Well, it turns out the TMS (Test Match Special) commentating team has had an almost infinite supply of cake since the 1970s when Johnston complained on-air that he’d missed his tea and cake break, prompting fans to send in hundreds of freshly baked ones for him and the crew to enjoy. This tradition continues to this day and during Johnston’s career, it’s rumored that the Queen herself once baked and sent one in. For the curious, it was apparently a fruit cake. More recently, the Queen personally oversaw the baking of a cake for the 40th anniversary of TMS in 2001, tasking the palace’s finest chef to prepare one using royal brandy.

In any event, other commentators who worked with Johnston have also explained that the crafty commentator would hide pictures of naked women in broadcasting notes to try and get people to flub their lines as they flipped through.

In turn, the aforementioned Jonathan Agnew would play jokes on Johnston by inserting fictitious sponsors into their notes with names like “Hugh Jarse”.

Despite all this, Johnston himself was ultra-old-school when it came to broadcasting. Educated at Eton and Oxford, he generally stuck to the classic, ultra posh tone of the BBC. On that note, in the beginning, it was even required that broadcasters at the BBC wear formal attire when broadcasting, despite that no one could see them. For more on this, see A Dinner Jacket, the Nazis, the “British” Accent, and What This All Has to Do With the BBC News.

Thus, Johnston, having worked for the BBC starting all the way back in 1946, generally took commentating very seriously. While he often tried to get others to break character, he seldom allowed himself to succumb to giggles and rarely, if ever, flubbing his lines. For this, and many other reasons, Johnston is regarded as one of the finest broadcasters in British radio history.

However, this all changed on that fateful August day in 1991 when Johnston and his foil were commentating about a particularly unusual incident that had occurred during the second day of a Test match between England and the West Indies. In short, cricketer Ian Botham had been caught off-guard by a particularly fast bowl (essentially a pitch for anyone more familiar with baseball) causing him to stumble, lose his balance and trample over his own wicket while attempting to step over it (those three sticks behind the batsman). Johnston was recounting this incident to listener and turned to Agnew for comment who quickly answered without a hint of humor, “He just didn’t quite get his leg over.”

For those unfamiliar with British slang “getting your leg over” is a euphemism for having sex, an innuendo that was especially on-the-nose given that tabloids at the time were filled with salacious stories about Botham’s off-pitch sexual adventures.

Johnston heroically attempted to soldier on with his summary of the day’s cricket as Agnew and the rest of the commentary box stifled their laughter. Johnston managed to last about 30 seconds before suddenly exclaiming, “Aggers for goodness sake, stop it!” and then himself becoming audibly short of breath as he attempted to suppress his laughter for several seconds. Finally, the ultra refined bastion of British stoicism broke- wheezing and giggling like a schoolgirl, all the while still trying, futilely, to continue commentating.

As Agnew would state of it, “It was Johnners who made it with those ridiculous squeaks … and tears pouring down his face.”

With laughter being as contagious as it is, and it being so out of character for Johnston to lose his composure like that, thousands of British motorists across the country listening to the broadcast likewise burst into fits of hysterics, with some having to pull their cars over to calm down.

So many commuters were forced to stop or slow down due to laughter that noticeable traffic jams were caused across the country directly thereafter with the longest on record being one at the entrance to Dartford Tunnel which was an estimated two miles long.

Johnston, as noted, was a man who prided himself on his professionalism and he was initially deeply upset at losing his composure, a sentiment echoed by the show’s producer who scolded the pair for being so unprofessional.

As Agnew would later state in an interview, “[I]t was a mistake at the time – we nearly fell off air and the whole thing descended into farce. I remember feeling really sick, because I felt this was potentially disastrous. It was a proper, genuine, uncontrived cock-up.”

The rest of the country, however, thought it was hilarious and the clip became an instant hit with public, something Johnston only became aware of the following day when he was driving to work and heard it being replayed on a morning radio broadcast.

Although he came to appreciate the joke, Johnston excused himself from commentating alongside Agnew for a year afterwards, reportedly because he was terrified he’d burst into similar fits of laughter again if the two made eye contact while commentating. When the pair were reunited, Agnew, once again made Johnston corpse with laughter by handing him a letter written by a fan called “Mr William H Titt”.  Agnew stated of the aftermath, “Johnners just collapsed. He had to be wheeled out of the box, there was terrible wheezing and whining and giggling. Brian later wrote to William H Titt and apologised. He didn’t get a reply.”

Sadly, Johnston passed away just a year later in 1994, however, the moment has lived on, reportedly being used by drama and broadcasting schools in Britain as a textbook lesson of what not to do when you feel the need to laugh while broadcasting. The moment received perhaps its greatest acclaim in 2005 when British radio listeners rated it as being the best moment in sports broadcasting history.

As a nod to his sense of humor and the enduring legacy of the line, the BBC ended Johnston’s 1994 obituary with “I’ve stopped laughing now.”

The oldest joke in human history that has survived through today as, naturally, a fart joke. To wit, recorded on a Sumerian tablet somewhere between 1900 and 2300 BC, the first known joke is as follow:

Fast-forwarding to the first jokes in English, there are a few riddles from the 10th century AD Anglo-Saxons recorded in the Exeter Codex that are generally regarded as the first known English jokes (albeit Old English) due to their double entendre nature. For example: “What hangs at a man’s thigh and wants to poke the hole that it’s often poked before? Answer: A key.”

And the similarly themed: