June 6, 2019 Karl Smallwood
Chloe M asks: What items does Batman have in his utility belt? 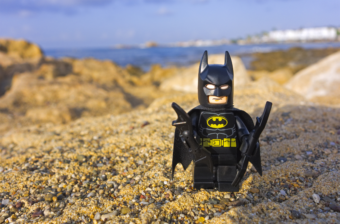 Over the years, it has become a running joke of sorts that Batman’s glorified fanny pack contains whatever items he needs to fulfill his current mission, regardless of how unlikely a scenario the caped crusader may find himself in. This leads us to the query of the hour- what has Batman’s utility belt been shown to contain?

Up until the release of Detective Comics #29, which formally introduced the idea of Batman having a utility belt, Batman’s costume had, for all intents and purposes, an ordinary belt that stored a single gadget- the bat rope with a grappling hook.

In Detective Comics #29, writer Gardner Fox decided to expand his tool-set, establishing that the Dark Knight wore a belt with numerous pouches containing various gadgets he may need while fighting crime- the first revealed being small glass pellets that when thrown released a large cloud of obscuring, choking gas.

From there things became a bit more elaborate. For example, among other things the utility belt was shown to include a giant balloon figure of batman that can be inflated remotely (Batman #115), a mini Geiger counter (Batman #117), and even a small disk made of asbestos inexplicably revealing his secret identity (Detective Comics #185).

In the 1958 comic Batman #117, it even shows him carrying shark repellent, for all those times one needs to fend off sharks while fighting crime on the streets of Gotham… If you’re curious, in this case Batman was underwater on an alien planet. Lucky for him, he remembered to pack his shark repellent and used it against an angry alien, reasoning that “if it works on the killers of the deep on Earth” it might just scare away a similar creature on an alien planet. We mention this because it gives the infamous scene in the 1966 Batman film where Adam West fends off a shark in mid-air with some handy Shark Repellent Bat Spray some context. Glorious, 1950s era context with pure West.

Later comics also establish that Batman has gadgets specifically designed to counter single members of his rogues gallery such as an antidote to the Joker’s Joker toxin, a Bat-heater to combat Mr Freeze, and special gloves that augment his punching power to fight on a more even playing field with the superhumanly strong villain Bane. Not just for enemies, Batman also apparently keeps what’s needed on hand to take out his allies as well, including a little bit of kryptonite, just in case.

It should also be noted here that in his very earliest comic outings, Batman’s utility belt had space for a handgun. Yes, as sacrilege as this would be in modern times, early versions of Batman had no qualms about shooting bad guys dead.

As for more day to day things, Batman’s utility belt further carries: A first aid kit containing basic surgical tools and various anti-toxins, an acetylene torch that can “cut through the hull of a battleship”, a forensic kit for analysing crime scenes, batarangs, a communication device, keys for the Batmobile, a rebreather in case Batman is ever submerged underwater, Batcuffs (special handcuffs designed to restrain even superpowered individuals), a lockpick, a high resolution camera and in some cases and the aforementioned grappling hook. In addition, the belt also contains numerous darts and pellets designed to subdue, incapacitate or otherwise stun criminals non-lethally when thrown. It also is variously shown to have a flamethrower, and EMP, a sonic devastator, remote claw, napalm, explosive gel, a cryptographic sequencer, and grenades of various type.

In the Batman and Robin film, the belt is even shown to contain a bat-credit card, which, if Batman is to be believed when he flashes it, is something he never leaves home without. And, to be honest, while this scene is often made fun of by the masses, it does at least accurately demonstrate a way for Batman to use his greatest super power- being rich.

In any event, as you might be gathering at this point, writers for Batman really do use his utility belt as a deus ex machina of sorts, usually introducing an amazingly specific gadget seemingly perfectly suited to solve whatever problem Batman has at a given time, with that gadget often never being mentioned again in later depictions.

In an effort to explain away their lazy writing in a semi-plausible way, the comic authors established in Batman canon that the hero obsessively plans every encounter to the most minute detail and has safeguards in place for any eventuality. Thus implying that the exact contents of his utility belt at any given time vary considerably from day to day, though even just going with the staple items that are supposedly always there, the storage capacity of this belt would give Hermione Granger’s handbag a run for its money.

Speaking of planning for any eventuality, the belt has numerous inbuilt security systems to prevent unauthorized use including a tracking beacon and an explosive charge so Batman can destroy it as a last resort if he ever loses it. The belt can also only be accessed by Batman and the various compartments and pouches will only open in response to a specific finger pattern.

The belt is also supposed to be constructed from a titanium alloy that makes it near indestructible, except, we guess from whatever explosive he used for its self destruct mode.

Of course, it’s at this point we feel compelled to point out that in the 1960s Batman TV show, early editions of his utility belt can very clearly be shown to be made up of common household kitchen sponges clipped to a yellow belt…

But to sum up, Batman’s superhero fanny pack contains a bafflingly array of equipment to fight crime, from shark repellent to kryptonite, that somehow all fits neatly into his tiny belt thanks to the magic of lazy comic writing.