May 22, 2019 Karl Smallwood
Luke T. asks: How many times can you shoot a bulletproof vest before it stops working? 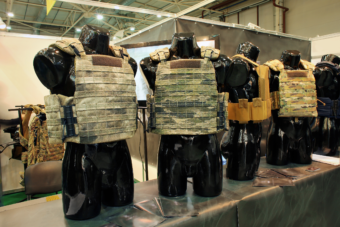 To begin with, it should probably be noted that the name “bulletproof vest” is a misnomer with “bullet resistant vest” being more apt. Or to quote John Geshay, marketing director for body armor company Safariland, “…nothing can be bulletproof, not even a manhole cover. In an extremely small percentage of cases, a round can even go through a vest that it is rated to stop. The round itself could have an extra serration on it or something.”

Furthermore, body armor designed to protect the wearer from high caliber guns can still be penetrated or compromised by smaller caliber bullets. For example, armor designed to stop a round from a .44 Magnum (the kind of round Dirty Harry claims can blow a man’s head clean off) could theoretically be pierced by a 9mm round if the latter is fired with a high enough muzzle velocity, with distance to the target also playing a role. Or as Police Magazine notes, “There’s a tendency among gun enthusiasts to dismiss the lethal potential of certain calibers of handguns. Don’t believe it. A small round traveling at high speed can punch through body armor.”

Similarly, in part because shot from shotgun shells have highly varying velocities, shotguns are deemed very dangerous even to otherwise extremely robust body armor. That’s not to mention, of course, that even should the vest do its job, the spread out nature of the shot gives a higher probability of unprotected areas being hit as well.

With that preamble out of the way, let’s discuss the differing levels of protection offered by various types of body armor and how many times they can be shot before they stop offering an acceptable level of defense. In the United States most all body armor is ranked according to standards set by the National Institute of Justice, or the NIJ, with their ratings pretty much considered the gold standard the world over in regards to levels of ballistic protection offered by a given piece of armor.

As for those ratings, the NIJ assigns a generalised level rating between 1 and 4 to all kinds of armor. In the most basic sense, the higher the level of the armor, the more protection it provides. For example, a rating of anywhere from Level 1 through 3a will stop bullets fired from the majority of handguns. For comfort’s sake, body armor at these levels are usually made from some sort of soft fiber material, such as Kevlar, though at the higher levels may use additional materials. On the extreme end, level 4 armor is the only kind capable of potentially stopping armor piercing rounds, and is usually made of some hard material, sometimes with a soft material like Kevlar reinforcing it.

On that note, although all kinds of armor are held to the same standards by the NIJ, a distinction is drawn between “hard” and “soft” types. For anyone unfamiliar with the terms, “soft” body armor is usually created by weaving ultra-strong fibres together in a web-like pattern, with the armor stopping bullets much in the same way a net slows and stops some object like a baseball, distributing the force over a larger area in the process.

“Hard” body armor on the other hand is usually created by inserting solid plates of either ceramic or special plastic into a vest or other housing.

Although hard armor generally provides more protection than soft armor, it has its own shortcomings that need to be considered. For example, ceramic armor plates are often only designed to protect the area around the heart and lungs owing to the drawback of hindered maneuverability if covering over other areas, as well as the fact that they are relatively heavy, with a 10 by 12 inch plate typically weighing about 7 or 8 pounds. So a combined front and back plate weight of roughly 15 pounds or 7 kilograms even when just protecting the heart and lung area.

This all finally brings us around to how many bullets a piece of body armor can absorb before it is rendered useless. Well, as you might imagine given how many different types of body armor there are out there, this depends. For example, on the extreme end we found some manufacturers who claimed their Level III body armors were capable of taking literally hundreds of rounds before failing.

As for some general examples, we’ll start with soft armor. The moment these are hit by a bullet, the fibers around the area of impact are compromised and lose some of their ability to absorb and dissipate the energy of a bullet. Thus, if another shot were to hit reasonably close to where the first hit, the bullet has a good chance of penetrating, even if the vest would have normally been able to handle it fine. Thus, while it is possible they can take multiple hits in some cases, and even be rated for such, depending on the caliber of bullet, way the armor was made, etc. it’s generally deemed unsafe to rely on this.

Moving on to ceramic plate armor, in most cases these plates are designed to shatter when hit by a bullet, dissipating the force of the impact via breaking up the bullet so that the smaller pieces can be absorbed by some backing material like Kevlar or some form of polymer or sometimes both. However, a side effect of this is that a large portion of the plate is then completely useless against a second shot similar to our previous example with soft armor. That said, there are types of ceramic armor that are designed to take multiple rounds, just, again, relying on this is generally considered unwise in most cases. And certainly with armor piercing rounds and level IV ceramic armor, the NIJ only requires it to work for one shot to receive that rating, though manufacturers do their own testing and we did find examples of companies that claimed to exceed that with their level IV ceramic armor, even with armor piercing rounds.

This brings us to polyethylene armor plating. In this case the impact of the bullet actually melts the plate which then re-hardens, trapping the bullet within it. Due to this, polyethylene armor can survive being shot numerous times without losing its ballistic integrity and we found examples of manufacturers that claimed their polyethylene armor could take hundreds of rounds before failing. Polyethylene plates also have the advantage of being roughly half the weight of ceramic for the same level of protection.

Hybrid body armor is also quite common at the higher levels, meaning your mileage may vary from a given piece of body armor to another, with the NIJ’s ratings giving a decent overview of what it’s capable of and often the manufacturer’s testing giving even more insight onto how many rounds of a given type of bullet the vest can take before failure.

All this said, again, while a given piece of body armor may pass the tests and even be claimed by the manufacturer to protect against much more, most manufacturers recommend replacing body armor even after a single shot. And, beyond that, even in some cases if you just drop your armor on the floor. This is because although body armor is designed to stop bullets, some types are surprisingly fragile. For example, ceramic plates can easily crack if dropped, sometimes in ways that aren’t visible to the naked eye.

Moving on to soft body armor, stretching or deforming the fibers in some way, again in ways that are sometimes not obvious to the naked eye, also can compromise their integrity. Some manufacturers even advise replacing Kevlar-based body armor if you just get it wet as this potentially weakens the fibers. On that note, because daily, otherwise innocuous, activities can sometimes compromise body armor, the standard in the body armor industry (set by the NIJ) is also to replace a given vest a maximum of every 5 years, even if it’s never been hit by a bullet.