Has Anyone Ever Had Surgery to Remove a Live Explosive From Their Body?

August 5, 2018 Karl Smallwood
Holly H.asks: I was watching Grey’s Anatomy and in one episode a guy is hit by a bazooka and the bomb gets lodged inside his body without exploding. Has this ever happened in real life? 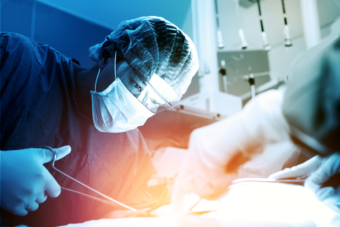 At first thought the idea of a human being hit by some kind of large explosive that not only doesn’t detonate and kill the person, but then somehow becomes lodged inside their body necessitating its removal via surgery seems like the invention of some hack Hollywood writer somewhere. However, while rare, the scenario is something that has happened a surprising number of times.

Now, as you may have already guessed, cases of unexploded ordnance becoming lodged inside of human beings are limited almost exclusively to military personnel. In fact, according to a 1999 study of 36 instances of this exact trauma, it is described as a uniquely “military injury” with it being additionally noted that there were – at the time the paper was written – no known cases of something similar occurring in reviewed civilian literature. This said, during our own research, we did find a handful of cases of non-military personnel sustaining an injury that resulted in an explosive becoming lodged inside their body.

Going back to the military though, by far the most common weapon to cause such an injury is the M79 grenade-launcher, which according to the aforementioned study was responsible for 18 of the 36 injuries discussed therein.

Further, according to the fittingly titled paper “Stratification of risk to the surgical team in removal of small arms ammunition implanted in the craniofacial region”, small munitions such as certain types of armor piercing and tracer rounds can occasionally ricochet and become lodged inside a person without the explosive innards going off. Even in a case such as this, removal of the round is of paramount importance and the surgery team is noted as being in extreme peril in doing it. (And, note here, contrary to popular belief and Hollywood depictions, in most cases it’s safer to leave regular bullets and the like in the body than try to get them out. Of course, if the thing inside the body is explosive, that’s a whole different matter.)

Going back to grenades and the like, amazingly, while you’d think something like having a large live explosive lodged somewhere in your body would be a surefire recipe for an untimely and rather messy death, fatalities from this particular kind of injury are surprisingly rare.

For example, according to the first study quoted in this piece, of the 36 known cases from WW2 to the modern day, there were only 4 fatalities (about 11%). Even more important here is that all 4 died before surgery could even be attempted owing to the injuries being especially severe, with half being hit in the face and the other two being struck by rocket launchers. Which any way you slice it is not the kind of injury you’d expect a person to be able to walk off, whether the explosive went off or not.

Nevertheless, stories of soldiers surviving even these kind of injuries exist. For example, consider the case of one Pvt Channing Moss who was hit by a “baseball bat-sized” rocket propelled grenade that buried itself in his abdomen almost completely through from one side to the other, with part of the device still sticking out.  He survived.

Then you have the story of Jose Luna, a Colombian soldier who was accidentally shot in the face by a grenade launcher and was up and walking around after several rounds of surgery to remove it and repair the damage as best as possible.

Perhaps the most impressive thing about the literature we consulted is that in every case where a patient with unexploded munitions inside their body was able to make it to surgery, the surgical team were able to remove the explosive without it exploding and they further went on to survive. In fact, according to the aforementioned study covering the 36 known cases, there wasn’t a single one where the explosive in question detonated “during transportation, preparation, or removal”.

A fact that almost certainly influences this statistic is that Explosive Ordnance Disposal experts are often on hand to offer advice before and during surgery. On top of this, from the moment a foreign object inside of a person’s body is identified as an explosive, multiple steps are taken to reduce the likelihood of it detonating. These measures include things like keeping the patient as still as possible and limiting the use of electronic or heating devices during surgery.

In addition, to protect the surgical team and others should the worst happen, the surgery to remove an explosive is usually (if time and circumstances allow it) conducted away from people in an area designed to absorb the damage from the explosion.

Surgeons are often also given protective equipment, though some choose to forgo this as it can impede their fine motor skills, which particularly need to be on form when removing undetonated explosives and operating on individuals who are severely wounded to boot. We can only assume these surgeons are already heavily encumbered by the size and density of the balls or ovaries they presumably have given their willingness to operate on a patient who might explode at any second.

On a related note, official US Army policy states that any soldier suspected of having unexploded ordnance in their body are not supposed to be transported for medical treatment, as the risk of the ordinance exploding and killing other soldiers is considered too great. However, this rule is seemingly universally ignored in the rare event such a scenario occurs.

As one Staff Sgt Dan Brown so eloquently put it when discussing the aforementioned case of Pvt Channing Moss who had an explosive in him powerful enough to kill anything within 30 feet of him, “He was American, he was a solider, he was a brother and he was one of us. And there was nothing gonna stop us from doing what we knew we had to do…”

Thus, the soldiers involved carefully bandaged his giant wound and chose not to inform their superiors of his exact condition in case they’d order them to follow the aforementioned rule. Instead, they just reported he had a severe shrapnel injury. The soldiers then carried him to an extraction point while under heavy fire for part of the time. The crew that then airlifted the soldiers were made aware of the situation and likewise agreed they weren’t going to leave Channing behind as the rules stated should be done, even though it would have meant all their deaths if the device had exploded mid-flight.

Once back at base, there was no time to setup an isolated medical station to get Channing away from the rest of the wounded, as he was in critical condition as it was. So they just operated right away, including at one point having to deal with the fact that his heart stopped mid-surgery and they were limited on their options to get it going again given the explosive embedded in his body. In the end, it all worked out and Channing got to go home to his six month pregnant wife and eventually met his daughter, Yuliana, when she was born a few months later.

In any event, as discussed at the start of this piece, there are also rare cases of civilians accidentally getting explosive devices stuck inside their bodies, though in all cases much less heroic than the military based events. For example, consider the case of a 44 year old Texas man who had an unexploded large firework mortar lodge itself inside his right leg after he approached the tube containing the firework, thinking it was a dud, only to have it violently shoot off and embed itself in said appendage. Luckily for him, it did not then explode as it was designed to do. The good news was that all went well from there on, with the main precautions taken simply not using any electrical or heat applying device during the removal stage of the surgery.

So yes, to answer the question posed at the start of this article, someone having an explosive device surgically removed from their body is not just a Hollywood invention, but does occasionally happen in real life. Although we couldn’t find any known incidences of megalomaniacal crime lords embedding explosive devices in their underlings to ensure loyalty and obedience. So that one’s on Hollywood I guess.

Further, while the occasional terrorist will shove some explosive in one of their orifices, to date these have generally been pretty ineffective, even in one case where the device, stuck up the suicide bomber’s rectum, went off when the bomber was standing right next to the intended target- Saudi Prince Muhammad bin Nayef. Nayef sustained only minor injuries while the suicide bomber had his midsection blown to pieces. Naturally, he didn’t survive.

It should also be noted that the often depicted scenario of surgically implanting explosives in such cases, at least thus far, hasn’t really been a thing according to the various counter terrorism agencies out there who’ve mentioned it as a possibility. This is despite many a media report implying such does happen.

In the end, as a Terrorism Research Center report noted, the procedure involved in surgically embedding in a human body an explosive large enough to do real damage is extremely complex, requiring extensive medical support and expertise with high risk to the patient surviving the procedure and being then fit enough to execute the mission. They also note that even then it takes too much time to be worth it when considering planning and recuperation time after. Thus, at least to date, terrorist organizations have stuck with more conventional methods of suicide bombing. For these reasons, while security experts are attempting to plan for this possibility, to date it’s noted not to be “on the radar” yet.

That said, one case of a device embedded in humans that sometimes explodes and causes damage is the case of pacemakers. It turns out that, while rare, these sometimes explode during cremation of a body that has one. While usually the damage is minimal, in 3% of the cases looked at in the paper Pacemaker Explosions in Crematoria: Problems and Possible Solutions, published in the Journal of the Royal Society of Medicine, the cremator oven structure was destroyed beyond repair by the explosion, including in one case also causing injury to a worker. However, it would appear this is still a pretty rare event, and in most cases the worst that happens is a loud bang startling crematoria employees.