Has Anyone Ever Really Inherited Millions from a Random Person They’ve Never Heard Of?

February 13, 2019 Karl Smallwood
Jessica K. asks: Has anyone ever inherited millions of dollars from a long-lost relative they’ve never heard of like happens in movies? 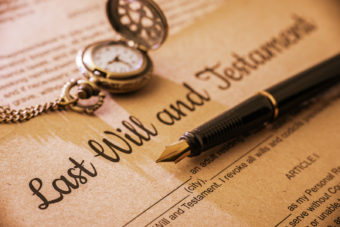 If you’re like, well, pretty much everyone, at some point you’ve received an email claiming you’ve inherited a large sum of money from some person you’ve never heard of. All you have to do to get it is provide various bits of personal data to verify you are who they think you are and, of course, your bank account information so the deceased’s crack legal team can deposit money… But has anyone ever actually received such a missive noting they’ve inherited a large sum from someone they don’t even know and had it not be a scam?

It turns out, yes. Absolutely. In fact, while it’s certainly uncommon in some sense, it doesn’t take much digging at all to find a variety of known cases of this happening, and presumably there are many, many more instances that have never made the newsreels.

To start with we have the case of a man listed in the newspaper clipping describing the event called only Dr. Meszaros. The good doctor willed around $50,000 in 1930 (about $770,000 today) to an actress by the name of Corin Ward. This came as a rather large shock to the young Miss Ward who Meszaros had never bothered to even introduce himself to. Before receiving the windfall, she hadn’t even known he existed. It was presumed in the news report that Meszaros must have been in love with the beautiful actress.

Apparently a good year for actresses, or at least in this case a former actress, also in 1930 we have the case of one Lillian Malrup.  Five years previous, Malrup inherited $60,000 (approximately $872,000 today) from her uncle George La’Lamontdier. Her uncle made his fortune, along with a business partner named Henri de la Salle, during the Alaskan gold rush.

Five years later, Malrup would receive an even greater windfall from her uncle’s former business partner who she’d never met and only knew of at all from a couple passing references her uncle had made in letters to her years before. How much did this mysterious business partner leave this young woman he’d never met? A whopping $700,000 (about $10.7 million today), which was no doubt a welcome thing to deposit into her account coming on the heels of the 1929 stock market crash.  He left only one stipulation to her getting the money- that she set aside $100,000 (about $1.5 million today) in a trust and use the interest from that fund for scholarships for college students.

In yet another case from the early 20th century, we have the rather odd story of Archibald McArthur- a man who deserves an article of his own. But to sum up his life story for now, as a young man he moved to Dodgeville, Wisconsin, arriving with almost literally nothing but the clothes on his back and a degree from Lawrence college. On his first day in town, he worked sawing logs in exchange for a bed to sleep in that night and a hot meal.

He subsequently spent the next couple decades making a fortune, living lavishly and then, for reasons known only to him, very suddenly liquidated all his assets, became a vegetarian, grew a rather Dumbledore-esk beard, and took a vow of poverty. He lived in a shack from then on and mostly just hung out in a nearby cemetery reading philosophy books and poetry. According to a January 31, 1926 article from the Milwaukee Journal, he  told people who asked that he preferred hanging out with the dead more than the living.

After a few decades living like this, at the age of 78 he seems to have felt the call all elderly feel at some point, and decided to move to Florida. He thus bought a car, drove to Florida, sold the car, and died a few years later. Beyond a few other bequests, including randomly leaving $15,000 (about $216,000 today) to the son of a woman, Mrs. Jane Joyce, whose family he’d been friends with when he was young, he left the bulk of his estate, $300,000 (about $4 million today) to a young clerk by the name of George Rafferty he once met on a park bench in Jacksonville, Florida.

Moving on we have the case of Wellington Burt, who decided not to leave the majority of his reasonably respectable fortune to his living family members, but rather to his future family. He stipulated in his will that the majority of his estate was not to be divided up until 21 years after his last grandchild died. Burt died all the way back in 1919, with his last remaining grandchild dying in 1989. When the trust was cashed out in 2010, it had grown to a whopping $110 million, which was divided up between 12 of his descendants.

In perhaps the largest sum ever inherited by someone who did not know the person who bequeathed it to them, we have the case of Zsolt and Geza Peladi, who were literally living in a cave near Budapest when they were painstakingly tracked down and then, once found, were informed they had inherited over $6 billion- yes, billion- from a grandmother they’d never met. Said Geza of this, “We knew our mother came from a wealthy family, but she was a difficult person and severed ties with them, and then later abandoned us and we lost touch with her and our father until she eventually died.”

In fact, according to Geza, the grandmother had not even known the pair existed. It was her lawyers that learned of their births about four decades previous and hired someone to track them down.

Alright, so those are exceptional cases. What about for everyday Joe Shmows like you and me? It turns out instances of unclaimed estates of people who died without a will or an immediate heir aren’t that uncommon. This is noted to be, in part, because people are horrible at getting around to making wills. For example, in the UK, only about half of the adults in the country have bothered to do this.

So how do you find out if you’re one such lucky individual due an inheritance that you don’t know about?

When a person dies either without a will or with a will that isn’t valid or applicable for whatever reason, they’re classified as dying “intestate”. In the UK, for example, this results in their estate passing on to the Government Legal Department- specifically to a department called, Bona Vacantia which literally translates to “vacant goods”.  Bona Vacantia, who acts on behalf of the Crown, will then make its best efforts to track down the closest living kin of the deceased.

If Bona Vacantia cannot find an entitled blood relative, the onus then falls on the potential heir of the deceased to make a claim. To assist this, Bona Vacantia maintains a frequently updated, easily searchable list of every unclaimed estate in the country.

If a match is found, one of the first things a potential claimant has to do is figure out where they fall on the so called “order of priority”, essentially a list detailing who, in the eyes of the Crown, is entitled to an unclaimed estate starting from husbands and wives on down to half aunts and uncles and their children.

In essence, anyone who falls into one of these categories can theoretically make a claim on an unclaimed estate, though their claim could be superseded by a counterclaim from someone higher on the list.

As for those who simply don’t even know to check if they’re owed some inheritance, there are so-called heir hunters who make their living tracking down the distant relatives of people whose estates lie unclaimed and charging a premium for bringing this knowledge to a person’s attention- in the UK usually a small percentage of the total estate’s value.

In any event, once a claim has been made and Bona Vacantia is happy that a person’s status as a legitimate heir is established through genealogy records, the amount of the estate they’re entitled to will be paid out.

If after 30 years the estate remains unclaimed, it will be dissolved and added to the Treasury. Exactly how much money this amounts to on a given year is unclear, but it’s known that in between 2013 and 2014, a cool £14million in unclaimed money went to the Crown.

As for making making a claim like this in the United States and really in many nations, similar to the the UK, individual states maintain lists of unclaimed property and estates that can be accessed and searched by the public- the scope and accuracy of which vary on a state by state basis.

Again, as with the UK, if a person in the US dies without a will or with a will that isn’t considered valid, the government will take control of their estate. However, there are some notable differences. For a start, while the Crown has a blanket policy of holding estates for 30 years before it goes to the Crown, some States, such as Texas, will do the same after just 4 years. Again, the statute of limitations when it comes to making a claim on an estate varies depending on where you are.

As for what happens to unclaimed money when it is ultimately turned over to the state, that also depends with individual States being largely free to choose what it does with the money. For example, Maryland gives the money from unclaimed estates directly to the Board of Education, unless the deceased died in the care of Maryland Medical Assistance Program, in which case the estate will go to the Maryland Department of Health and Mental Hygiene.

Like in the UK, so-called heir hunters may also track down distant relatives who have a potential claim to an unclaimed estate. However, unlike in the UK, companies offering such a service are usually (though not always) acting on behalf of the government. As the Heir Hunters Association notes:

Most state organisations make every effort to trace beneficiaries using probate researchers (who may also be called probate detectives or heir hunters). Usually specialist firms are appointed on a regular basis and may work on a fee basis paid from the entire estate, or contingency where tracing fees are deductible from a beneficiaries share.

Finally, while there are some cases of a Brewster’s Millions type scenario involving someone inheriting massive sums from an eccentric, long-lost uncle they didn’t know about, most cases we researched concerned far more modest estates, more in the thousand of dollars range instead of millions or billions. This kind of makes sense if you think about. Because, come on, when an obscenely rich person dies, there are always people lying around who will be quick to try to claim a piece of the pie, whether there is a will or not. For perhaps the most famous case of this happening, do read our piece on What Happened to Howard Hughes’ Fortune After He Died?