What Causes the Smoke Trails Behind Airline Planes High in the Sky?

September 22, 2018 Daven Hiskey
Mike L. asks: What is the chemtrail smoke behind airliners? 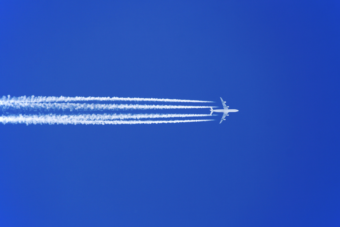 So called “chemtrails,” though more technically known as contrails, first appeared behind planes going all the way back to the earliest days of high altitude flight. One of the earliest known surviving references of such occurred when an American soldier by the name of Captain Ward Wells observed a peculiar sight in the heavens in October of 1918, with his letter written on the subject eventually being published in Scientific American not long after:

Our attention was first drawn to the sky by the sudden appearance of several strange and startling clouds- long, graceful, looping ribbons of white. These were tapering to a point at one end, and at the other, where they dissolved into nothingness, 60 degrees across the sky, were about as broad as the width of a finger held arm’s distance from the eye… One close observation we noticed some distance ahead of each cloud point the tiny speck of a chase plane. Apparently the churning of the air was all that was needed to upset the delicately balanced meteorological conditions and precipitate this strange cloud formation…. I had seen ships leave their tracks in the clouds, similar to those of little sea animals in the wet sands at the shore, but never before had I seen a plane writing in white upon the blue slate of the sky!

With the rise of commercial airline traffic, these peculiar cloud formations behind planes have become commonplace. But what actually causes contrails, and why don’t they always appear behind planes?

In a nutshell, contrails, much like any other cloud, are mostly made up of water suspended in the air- hence the name contrail, which is derived from the two words “condensation” and “trail.”

Contrails are created by planes via one of two ways- first, as the airplane passes through the air, it creates areas of low pressure, for instance, above the wings as a byproduct of the wing shape. This sudden drop in pressure can cause the air temperature to drop below the dew point around certain parts of the plane.  If this happens, water in the air may condense into little droplets. These droplets may even freeze if the air temperature is cold enough; but either way, the result will be a usually very short-lived streak of water vapor behind the plane.

Beyond potentially seeing this just behind or above the wing flaps when they are extended, in some cases, you can briefly observe this phenomenon in the vortices of air created at the ends of the wings. In this case, you’ll see spiraling, corkscrew looking vapor trailing the plane’s wing tips.

You may also observe this effect in the intake of the engines of commercial airplanes if humidity levels are high enough.  As in the other cases, this is caused by a drop in air pressure resulting in water condensing in the intake, creating something of a little cloud inside said intake.

Similarly, you occasionally might see contrails form at the tips of propellers in certain conditions for the same reason.

All this said, these types of contrails aren’t the ones you’re seeing when you look up high in the sky as commercial planes fly over head. Rather, this type of low-pressure induced contrail is more likely to show up when a plane is making high speed maneuvers in high humidity air. For example, it’s not uncommon to see this when a fighter jet takes off from an aircraft carrier.

So what about the far more commonly observed contrails streaming behind planes flying at high altitude? These are a byproduct of burning jet fuel in air that is extremely cold, though otherwise aren’t really any different than the former contrails- they’re both caused by water condensing, just in one case it’s the water already in the atmosphere condensing, and in the other it’s water that’s introduced into the air.

Specifically, as the jet fuel burns, aside from other things the exhaust introduces into the atmosphere, like unburned fuel and various particles, it mostly expels carbon dioxide and water.

When at high altitude where temperatures are often well below freezing, this expelled water vapor, combined with the various particles also expelled providing nucleation sites for the water, will sometimes condense and then freeze, with the result being a long, white cloud formation behind the plane. This usually begins at some distance behind the engines as when the exhaust is initially expelled, it is quite hot.

This is not totally dissimilar to how when you breathe out from your mouth during winter you’ll often see white vapor forming several centimeters outside of your mouth as the moisture in your breath encounters the frigid air around.  Further, if the air is quite dry, the mini-cloud forming outside your mouth will tend to dissipate very rapidly, whereas in days with higher humidity it will last a little longer.

A similar thing occurs in planes, but thanks to significantly more water vapor, a lot of nucleation sites being expelled, and often all occurring in more extreme temperatures, the contrails may last for many hours.

Further, if the humidity is high enough, they may even potentially expand into otherwise natural looking cirrus clouds. This occurs as water from the surrounding atmosphere condenses around nucleation sites in the contrails and winds slowly disperse the contrail over a wide area. This tendency of contrails to stick around for long periods of time is also a phenomenon that’s been regularly observed from the earliest days of high altitude flight.

On this note, if you notice that contrails above you form and then dissipate quickly, you can likely expect a continuation of clear weather that day, whereas if the contrails stick around for a long time and are seen to expand greatly in the interim, this means the air in high altitude is likely very humid, increasing chances that you may have clouds, rain or storms on the horizon. Or it could just be the Illuminati messing with you again…