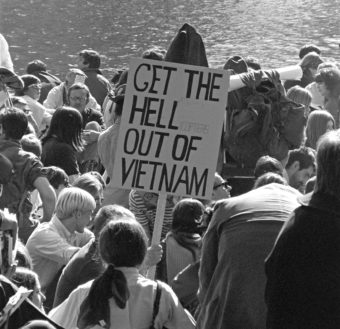 On April 26, 1968 a 19 year old man called Paul Cohen walked into the Los Angeles County Courthouse to testify in a case for a friend. This, in and of itself, isn’t noteworthy. Why Mr. Cohen would have his name stenciled into the history books is because of something that was in turn stenciled on his jacket- the words “FUCK THE DRAFT. STOP THE WAR”.

The use of arguably the most versatile of all swear words here irked a police officer who quietly asked a judge if it was possible to arrest Cohen for contempt of court. When the judge told the officer that it wasn’t, the officer took matters into his own hands and arrested Cohen anyway the moment he left the courthouse. The charge? Disturbing the peace. (Ironically by advocating for peace in a peaceful manner…)

Cohen was later sentenced to 30 days in jail. Naturally, he wasn’t happy about any of this and, thus, he appealed the decision. The case would ultimately go all the way to the Supreme Court with their ruling in the landmark case of Cohen vs California handed down on June 7, 1971.

Recognising the precedent that could be set if the case was allowed to stand vs. being over turned, the American Civil Liberties Union quickly agreed to defend Cohen, getting University of California professor of law Melville Nimmer – one of the foremost experts on the First Amendment in the country – to defend him.

Humorously, one of Nimmer’s key tactics when defending Cohen in court was to use the word “fuck” as much possible at every stage of the game in order to weaken the argument that the word was inherently offensive.

On that note, when Nimmer first appeared in front of the Supreme Court, Chief Justice Warren Burger, in an attempt to stop Nimmer from saying “fuck” in the most hallowed of court rooms, explicitly instructed him “Counsel, we are familiar with the facts of this case. You can dispense with them and move directly to your legal argument.”

Instead, Nimmer replied, “Of course, Your Honor. Suffice it to say that my client was convicted of disturbing the peace for wearing a jacket in public bearing the words ‘Fuck the Draft.’”

This and his continued frequent use of the word ultimately saw some of the Justices more than a little irritated at him, with said justices themselves choosing to use euphemisms. As for Burger, he went with calling it the “screw the draft” case and otherwise referred to the offending expletive as “that word” rather than saying it.

Nimmer was convinced that he had to use ‘fuck,’ and not some euphemism, in his oral argument. If Nimmer had acquiesced to Burger’s word taboo, he would have conceded that there were places where ‘fuck’ shouldn’t be said, like the sanctified courthouse. The case would have been lost.

As to his actual legal argument, Nimmer stated that the stenciling on the jacket fell under the umbrella of speech and, as such, was protected by the Constitution. He then pointed out, amongst other things, that in contrast to the charge of disturbing the peace, no known direct offence via members of the public was caused by the jacket itself and that people could easily look away if they didn’t like what the jacket said. Nimmer also noted that the wording of the statement didn’t target any particular group nor incite violence. Further, as for Cohen, there is no record of him saying or doing anything at all other than calmly walking when he was arrested for disturbing the peace.

In the end, after over three years of legal wrangling leading up to the Supreme Court hearing the case, they ultimately agreed with Nimmer in a 5-4 decision, finally settling the case of Cohen v. California and enshrining into U.S. law the right of the public to use the word “fuck”, even in a public courtroom, as well as more significantly helping to clarify aspects of the First Amendment.

The majority opinion in the case was written by Justice John Marshall Harlan- an essay that would later be called by Professor Yale Kamisar one of the best ever penned on the subject of freedom of expression.

Humorously, the essay deftly avoided ever using the word “fuck”, apparently in no small part because of pressure from Justice Burger who is quoted as having said to Justice Harlan, “John, you’re not going to use that word in delivering the opinion, are you? It would be the end of the Court if you use it, John.”

So what did he actually say here? In part:

This case may seem at first blush too inconsequential to find its way into our books, but the issue it presents is of no small constitutional significance…The constitutional right of free expression is powerful medicine in a society as diverse and populous as ours. It is designed and intended to remove governmental restraints from the arena of public discussion, putting the decision as to what views shall be voiced largely into the hands of each of us, in the hope that use of such freedom will ultimately produce a more capable citizenry and more perfect polity . . .

To many, the immediate consequence of this freedom may often appear to be only verbal tumult, discord, and even offensive utterance. These are, however, within established limits, in truth necessary side effects of the broader enduring values which the process of open debate permits us to achieve. That the air may at times seem filled with verbal cacophony is, in this sense not a sign of weakness but of strength…

Surely the State has no right to cleanse public debate to the point where it is grammatically palatable to the most squeamish among us. Yet no readily ascertainable general principle exists for stopping short of that result were we to affirm the judgment… For, while the particular four-letter word being litigated here is perhaps more distasteful than most others of its genre, it is nevertheless often true that one man’s vulgarity is another’s lyric…

Finally, and in the same vein, we cannot indulge the facile assumption that one can forbid particular words without also running a substantial risk of suppressing ideas in the process. Indeed, governments might soon seize upon the censorship of particular words as a convenient guise for banning the expression of unpopular views…

It is, in sum, our judgment that, absent a more particularized and compelling reason for its actions, the State may not, consistently with the First and Fourteenth Amendments, make the simple public display here involved of this single four-letter expletive a criminal offense.

Amusingly, one of the first things Cohen did after the case ended was return to the County Court and talk to the judge who had originally sentenced him. Of this meeting, Cohen stated, “I could tell the judge was upset with the Supreme Court’s ruling in my favor… I probably angered him even more when I asked for my jacket back.”

Unfortunately for Cohen, someone had mysteriously misplaced the jacket during the case, and so it was never returned.

Cohen would later sum up his own opinion on the outcome of the case, stating,

I spent years thinking about whether the decision was correct. I wasn’t a person who used a lot of profanity and I didn’t think women and children should have had to see that language on the jacket. I didn’t want to be known as contributing to what President Ronald Reagan, whom I admired, called the ‘Filthy Speech movement.’ I mean there were children in that courthouse. However, I came to the conclusion that I agreed with the decision simply because the government shouldn’t be able to decide what speech an individuals can or cannot speak. That would be quite a slippery slope.

Given his position on profanity, you might at this point be wondering how he came to be wearing the offending jacket in the first place.  Cohen states of this, “I had a Ph.D. in partying back in those days,” and a girl he met at a party the night before had simply stenciled the words onto his jacket when he was drunk. “I didn’t even see the wording on the jacket until the morning before I was headed to court to testify on behalf of an acquaintance. I was and am a patriotic person.”