How Metals are Made 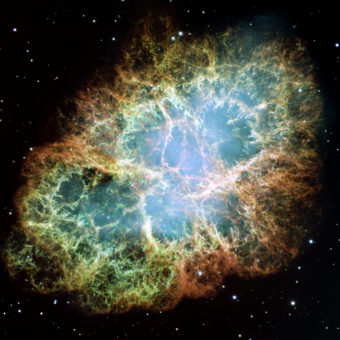 Scientifically speaking, metals are naturally occurring chemical elements that are typically hard, lustrous, and good conductors of both heat and electricity. Examples include iron, gold, silver, copper, zinc, nickel, etc., but also elements we don’t normally think of as metals. One is sodium—a metal we regularly eat: Sodium is a soft, silvery white metal that commonly bonds with the element chlorine to form sodium chloride, or common salt.

Another is astatine, which was discovered in 1940 in a lab, where it was created artificially. It wasn’t discovered in nature until 1943. Astatine is highly radioactive, and only a single ounce of it is believed to exist—in total—on Earth. Of the 118 known chemical elements in existence, 88 of them are metals.

So, where did all these metals come from? Here’s a very simplified explanation:

All elements, including metals, are made of the same stuff: atomic material—electrons, neutrons, and protons. Atoms of different elements can be distinguished from one another by the number of protons they contain. (The number of neutrons and electrons can vary even among atoms of the same element.) For example, a hydrogen atom contains just one proton. A gold atom has 79. This is true of every one of the countless hydrogen and gold atoms in the universe.

If you could find a way to mash 79 hydrogen atoms together into one atom, you’d have an atom with 79 protons, and therefore you’d have a gold atom. And that’s almost exactly what happens… except it happens inside stars.

THERE’S GOLD IN THEM THAR STARS

Roughly 13.7 billion years ago, matter first appeared in the form of atoms of the two lightest elements: hydrogen, with one proton, and helium, with two. They remain, by far, the most abundant elements in the universe.

After many millions of years, those first hydrogen and helium atoms collected in clouds of dust and gases so huge they would have to be measured in light years (1 light year = 6 trillion miles or 9.5 trillion kilometers). The clouds eventually gave in to their own enormous gravity and collapsed, forming the first stars. And stars were atom destroyers—hot enough to break down those hydrogen and helium atoms, and fuse the bits back together, remaking them into larger atoms of different, heavier elements.

For example, if you fuse two hydrogen atoms together, you have an atom with two protons—or helium. Fuse three hydrogens together and you get an atom with three protons—lithium, the first and lightest metal. Fuse three heliums together and you get an atom with six protons—carbon. This is what’s happening in all the stars you see in the sky at night. In the massive ones the process can result in the production of heavier and heavier elements, including metals such as titanium (22 protons), and iron (26 protons). If they’re especially massive, they can produce the heaviest metals, such as gold (79 protons), and uranium (92 protons). This is one of the things stars do, and that’s how all the elements—including all those shiny metals—are formed in nature.

Now, how did they get here?

In the first few billion years after the Big Bang, billions and billions of stars were born, in the way we just described. Many were extremely massive (hundreds of times larger than our sun) and massive stars live relatively short lives—just a few million years in some cases (smaller stars can live for billions of years)—and then die by exploding as supernovas.

And when those massive stars exploded billions of years ago, they expelled the heavy elements they had been creating, sending them into space. They had, to put it one way, “seeded” the universe with elements, including metals. And super-massive, impossible-to-comprehend amounts of it—trillions and trillions and trillions of megatons of it. That means that when new stars were later formed—they had already been “seeded” with metals left behind by those supernovas.

One of those later, metal-rich stars was our own sun. A quick look at that story:

Our Share: Earth has a lot of metal. Nearly a third of the planet’s mass is the element iron, most of that located in the planet’s core. Another 14 percent is magnesium, 1.5 percent is nickel, and 1.4 percent is aluminum. That’s 49 percent of the planet. The rest of Earth’s metals, including “precious” metals such as gold, silver, platinum, and palladium, exist only in trace amounts. The rest—the non-metal portion—is about 30 percent oxygen and 15 percent silicon, along with smaller amounts of numerous other non-metal elements.

For at least a few million years, human beings and their ancestors used tools made from such materials as wood, bone, and rock, to help make their lives a little easier. It didn’t make their lives that much easier: Homo sapiens have been relatively primitive nomadic hunters and gatherers for almost all of their existence. Then, around 10,000 years ago they began discovering ways to work with a “new” material: metal.

The first metals used by humans were the ones that early metalsmiths didn’t have to do very much with to make them usable. These are the native metals—metals that occur in nature in a pure state, or are naturally mixed with other elements in a way that maintains their usable properties. They include copper, tin, lead, silver, and gold.

Someone might have just found nuggets of these metals in a streambed, or in the roots of an unearthed tree, and thought they were attractive. They may have pounded them with stone hammers and found that they could shape them. That could have led to metals being used in jewelry or ornaments, or to the making of metal tools and weapons like axes, knives, and swords—a vast improvement over the old stone tools. All of this eventually led to people actively searching for more metals, the establishment of mines, trading in metals between different peoples, and the birth of a metal industry. However it happened—it happened in numerous locations all over the world.

Starting around 8,000 years ago, people started discovering that they could alter the metal. They may have discovered it by accident, or perhaps people just got creative, or maybe it was a combination of both. In any case, new processes were developed to alter metals, then to create entirely new ones that didn’t exist in nature at all—with huge improvements in quality. Over the next few thousand years, mining and metalworking became integral to most of the cultures on Earth, and metal became one of the most civilization-changing substances in human history. Each of these new processes involved fire, and it’s likely that experimentation with one led directly to the next. The most important advancements:

Iron is the most abundant metal on Earth. But like most metals, getting to it is tricky, because it’s very rarely found in a pure state in nature. It most commonly exists in iron oxides—molecules composed of iron and oxygen, which are found mixed with rock in iron ore. To get the iron, you have to get rid of the oxygen and the rock. Here’s the most common process used today:

Today about 98 percent of pig iron produced worldwide goes into the production of steel, the most widely used metal or metal alloy in history. The process begins by pouring molten pig iron into steel furnaces, where it is treated to remove any remaining impurities, and to lower the carbon content to between 0.1 and 2 percent. That’s one of the chief characteristics of steel: All but a very few of the hundreds of different types of steel contain carbon at these levels. That reduces the brittleness, while increasing strength and hardness. Depending on the type of steel being made, different elements are then added to the mix. Two examples:

The most common ore used for aluminum production is bauxite, a claylike substance that is around 50 percent alumina—aluminum bonded with oxygen. As with iron, getting to the aluminum means getting rid of the oxygen and the minerals in the ore. The process is much more complicated than iron extraction, and was only developed in the late 1800s. (Aluminum was only identified as a unique element in 1808.) The first part of the system most commonly used today is called the Bayer process, named after Austrian chemist Karl Bayer, who invented it in 1877.

The Bayer Process: Bauxite is mined and crushed, then mixed with water and lye, and heated in tanks. This heat and lye cause the alumina in the ore to dissolve in the water, while impurities sink to the bottom. The alumina-rich water is then siphoned off and filtered to remove further impurities, and then pumped into huge precipitation tanks, where the water is allowed to precipitate away. What remains is a white crystalline powder that is about 99% alumina. The crystals are washed and allowed to dry.

The next step is known as the Hall–Héroult process, named for the two chemists who developed it—independently of one another—in 1886. In this process, the alumina crystals (along with minerals that aid in the breakdown of alumina) are smelted at about 1,760°F in steel vats. But that’s not enough to break the aluminum-oxygen bonds in the alumina; they’re much stronger than iron-oxygen bonds. So a powerful electric current is sent through the molten material—and that causes the bonds to break. The oxygen is released as gas, and is attracted to carbon rods suspended above the molten mix, where it bonds with carbon to form CO2 gas (just like in the iron smelting process). The freed-up aluminum melts and collects at the bottom of the pot. At this point it is 99.8% pure aluminum.

Aluminum is used in a wide variety of applications, in its pure form (aluminum foil is made from nearly pure aluminum), and more commonly in alloys, mixed with elements such as silicon, copper, and zinc. Some are stronger than steel, and have the added benefit of being much lighter. Common uses include in cookware, soft drink cans, and automobile engine blocks.

Platinum is a shiny, silver-white metal that is very rare and has some unique qualities: It’s one of the densest metals, yet it is very malleable; it is extremely resistant to corrosion by temperature, rust, or exposure to materials such as acids; and it has a very high melting point of 3,215°F (Gold’s melting point is just 1,064°, and iron’s is 1,535°.) Platinum does exist in pure form in nature, but it’s more commonly found mixed with other elements, including oxygen, copper, and nickel. More than 90 percent of the platinum mined in the world today comes from just four sites: three in Russia and one in South Africa. Production is quite complicated.

More than ten tons of ore must be mined to make a single ounce of platinum. A brief description of the process is as follows: