Secrets of the Avocado 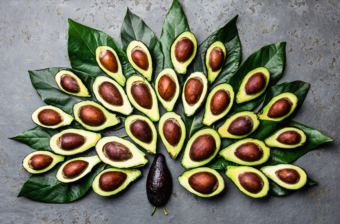 Inside that textured green skin, it’s ripe with mystery. It’s an “evolutionary anachronism.” It’s not a vegetable, and not exactly your typical fruit. It’s an acquired taste that most Americans still resist. Meet the avocado.

The avocado came from South America, so it’s not too surprising that the Nahuatl language of the ancient Aztecs gave us its name, derived from ahuacatl. Besides referring to the fruit, the word had another meaning: “testicle,” which also isn’t too surprising, considering the fruit’s shape and texture. Although “guacamole” doesn’t really sound like “avocado,” the two words share a root: Guacamole comes from the Nahuatl ahuacatl-molli, which means “avocado sauce.” (The fact that it also means “testicle sauce” is probably not something we want to dwell on.)

BEEN THERE, DUNG THAT

Biologists suggest that it’s a lucky accident the avocado is still with us, because it evolved to fill a niche in an ecosystem that went extinct eons ago. As with many fruits, the avocado developed as a mutually beneficial trade-off with animals. The tree provides tasty food, but there’s no such thing as a free lunch—the plant’s price for its fruit is mobility for its seeds. How does that work? The seeds of the fruit are typically small enough to pass through the digestive systems of the animals that eat it. The seeds are often bitter, sometimes even toxic enough to cause nausea. So animals rarely chew them more than once, but instead learn to swallow them whole. The seeds exit the digestive system intact, as waste, and end up planted in the animal’s nutrient-rich dung.

There’s no reason to believe that the avocado was an exception to this rule. It’s unlikely that the plant species’ survival was ever meant to depend on humans poking its seed with toothpicks and suspending it in water to get it to sprout. But that begs the question: What animal in South America is big enough to eat a avocado whole and poop out its oversize pit?

The answer, of course, is that there is none. Not anymore, anyway. As with the mango and the dodo fruit, the plant’s animal partner is no longer with us, making it what scientists call an “evolutionary anachronism.” Long ago, South America was ruled by megafauna, giant animals that lived until humans arrived and apparently hunted them to extinction, around 10,000 to 20,000 years ago.

For millions of years South America was an island, not yet connected to North America, allowing for richly diverse evolution of animals such as the glyptodon, an armadillo the size of a Volkswagen Beetle, and the sleek macrauchenia (“long neck”), a 10-foot-long grass eater that looked like a cross between a horse, a camel, a giraffe, and a svelte elephant. Then there were the giant ground sloth, 20 feet long and weighing five tons, and the gomphothere, an oversize elephant-like creature that might have roamed South America as recently as 9,000 years ago. All four are prime candidates for being the avocado’s co-evolutionary pals. But if the fruit hadn’t turned out to be tasty to humans, it may well have gone the way of the glyptodon and the gomphothere.