The Curious Case of Merkins (aka The “Vagina Wig”) 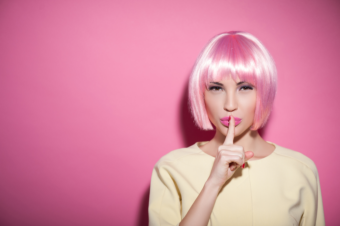 Called by some a “vagina wig,” the Oxford English Dictionary defines the noun, merkin, as “an artificial covering of hair for the female pubic region.” And although given the recent popularity of meticulous waxing and grooming of one’s nether regions you may think the merkin must be a modern invention, in fact, it has actually been around for at least five centuries.

While the OED lists the word’s earliest appearance at 1617 in John Taylor’s Three Weekes Observer as “Mistris Minks recouer her lost mirkin,” the Oxford Companion to the Body dates the actual practice of wearing a pubic wig to the mid-15th century, and it may actually go back much further.

It appears the merkin’s original purpose was highly practical: women, particularly prostitutes, shaved their pubic hair to combat pubic lice and maintain better hygiene, but then for cosmetic reasons, donned the wig to cover up their bare bits. Such a wig had the great advantage of also being easy to remove and clean in a much harsher fashion than attached hair, to ensure things stayed as hygienic as possible.

It’s also often suggested that prostitutes used merkins to conceal obvious signs of venereal disease, but there doesn’t seem to exist much in the way of any real evidence to support this claim. And certainly the widely reported rumor today that it was commonly used to cover syphilis is highly unlikely. Signs of primary syphilis in women often present on the cervix.  But even if it was covering signs around the more visible vaginal area in a specific case, unless the merkin was covering large portions of the woman’s body, it wasn’t going to be hiding secondary syphilis which can include rashes on the trunk and extremities, among other widespread visual symptoms that ultimately occur roughly 2-8 weeks after primary syphilis rears its microbial head.

That’s not to say it’s not possible merkins were used to hide signs of certain STDs- it seems tangible enough, though one would think if it was a common practice as is often claimed, men interested in not getting diseases would have simply taken a few seconds to check under the merkin before doing the deed with a given prostitute… But either way, there doesn’t actually seem to be much in the way of any documented evidence to support this idea, and certainly its widespread use in hiding syphilis, as is claimed in just about every modern source we consulted on the history of merkins, seems highly suspect.

In any event, made of a variety of soft fabrics or hair, it is also often stated that a popular material for merkins historically was beaver pelt, which is further widely claimed to be the origin of the modern use of “beaver” as a pseudonym for lady parts. In truth, however, it would seem there was no such popularity of beaver pelts for merkins, with documented examples made of things like human, horse, or goat hair.

But even if beaver pelts were popular for this historically (again, documented evidence on this is scant, but it’s always possible beaver pelt merkins were a thing), the first known instance of “beaver,” meaning “vagina,” didn’t appear until 1927 in Immortalia by “A Gentleman About Town”, where it states,

There was a young lady named Eva
Filled up the bath tub to receiv-a;
She took off her clothes
From her head to her toes,
And a voice at the keyhole yelled, “Beaver!”

Given this is a relatively modern slang term for lady bits, the popularity of merkins had severely waned by the 20th century, and there is no documented connection between these early references and the merkin, it seems unlikely that the “beaver” slang term had anything to do with merkins.

As for where the word “merkin,” itself came from, this isn’t clear either.  It has been speculated (including in the OED) that it derives from malkin, a nickname for women named “Mary” and “Maud”- particularly used with lower class women- that was first recorded in the late 13th century, but this is noted as being just speculation.

In the end, likely due to the uncouth nature of the subject matter making it not exactly something that was widely documented historically, tracing the history of merkins, and even how they actually attached them centuries ago, is something of an effort in futility.

That said, we do know merkins remained popular through the 18th century and some, particularly those worn by more affluent women, were even richly decorated with ribbon, jewelry, flowers and other embellishments, to help pretty them up.

As for today, while the merkin has long been mostly a relic of history, they’re still around in some circles largely because of the trend to go bare or very closely cut. For example, it is reported that in The Reader (2008), actress Kate Winslet was having a bit of trouble growing out her pubic hair to the satisfactory of the filmmakers (owing to, as she put it, “years of waxing”), so they had a merkin made to cover “her more modern grooming.” Winslet, however, didn’t care for the thing and stated in an interview she told them, “Guys, I am going to have to draw the line at a pubic wig, but you can shoot my own snatch up close and personal.”

On that note, beyond trying to make the grooming of hair down there more accurate to the era a film might be depicting, the use of merkins among bare actresses today is also helpful when trying to avoid ratings like NC-17 for a film. If the actress’ nether regions are sufficiently concealed by hair, the MPAA will probably look the other way and give a film a less restrictive rating, depending on how exactly said region is shown in the movie.  If the bare lady bits are shown, however, even briefly, getting a less restrictive rating is much less likely. Thus, erring on the side of caution, most directors will instruct the bare among us to either grow it out for nude scenes or put on a merkin.